Ferrari Formula 1 junior Antonio Fuoco believes McLaren-affiliated Lando Norris 'just crashed into him' in the Silverstone Formula 2 round, though it was Fuoco who was penalised

Norris was attacking Fuoco for sixth with one-third of the Sunday race to go when Fuoco edged him off the track on the outside of Brooklands.

When Norris tried to rejoin, the pair collided at the inside of Luffield.

Fuoco was given a 10-second penalty although he retired in the crash, which sent him momentarily airborne and into the wall.

"I think it's quite clear he just crashed into me," said Fuoco.

"I was on the inside and then the outside and he could never make the corner.

"Now it's easy as there's only asphalt on the outside of that corner. If it was gravel, no.

"Because it was asphalt there, he kept pushing and he just crashed into me.

"I put [Luca] Ghiotto in the wall in Monaco and I get a drivethrough.

"He put me in the wall here and they give me a 10s penalty."

Norris felt he was the innocent party in the collision.

"I was completely alongside," said Norris.

"At the end of the race, there was no need for the penalty [as Fuoco had retired].

"He didn't deserve to DNF, but if he continued behind me I think he would have deserved a penalty for doing what he did." 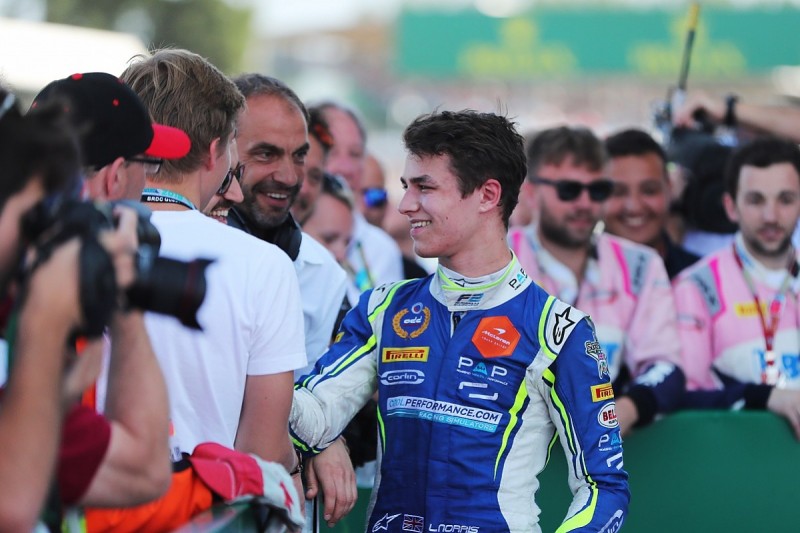 Norris continued in the race - pulling off an audacious overtaking move to pass Artem Markelov and Nyck de Vries around the outside of Vale for third - despite suffering damage.

"I was quite lucky because after the contact had happened I turned right for Luffield and thought 'something has gone here'," Norris explained.

"I just had no steering.

"But when I went into Copse it felt pretty good.

"I think it was slightly bent, but it wasn't really hindering.

"The car had oversteer anyway, so it was just calming the car down, so it was actually quite nice."

After losing the points lead at the Red Bull Ring a week earlier, Norris finished behind title rival George Russell in both races for the second weekend in a row at Silverstone and is now 37 points behind in the championship.