Former European F3 driver Sette Camara, who took a pair of podiums in the season opener in Bahrain, managed a 1m57.136s, ahead of Campos racing's Luca Ghiotto.

In the first half of the session the pair took turns to top the order, but a benchmark from Sette Camara at the mid-way point wasn't to be beaten. Ghiotto took chunks out of the original half-second deficit, and ended the session less than a tenth behind.

MP Motorsport driver Ralph Boschung rounded out the top three and did lead the session at one juncture. He finished 0.4 seconds adrift of the leader.

Alexander Albon, who is understood to be competing with DAMS for the rest of the season after a one-off with the team in Bahrain, took fourth ahead of Mercedes Formula 1 junior George Russell, as both had troublesome sessions.

Albon stopped just after Turn 2 early on. His car was wheeled back to the pits and reset, with 20 minutes gone in the session.

Russell stalled at the exit of the pitlane where he was attempting a practice start. He and team-mate Jack Aitken, among others, struggled to get their cars off the line in Bahrain at the previous round.

Championship leader Lando Norris sat sixth behind Russell, while the glaring omission from the top 10 was Artem Markelov.

His session ended early when he stopped in the run off at Turn 3 and was unable to get going again. The Russian Time driver won the Bahrain sprint race, but had trouble in practice for the season opener as well as he suffered from electrical issues. 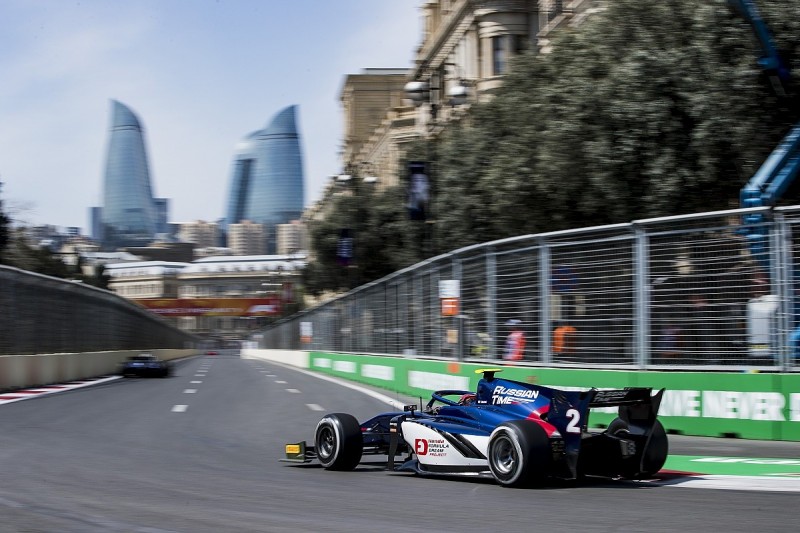 His team-mate Tadasuke Makino ran in the top three earlier in the session but had to settle for seventh. He was one of a number of drivers to head into the run off, twice at Turn 1.

Antonio Fuoco narrowly avoided the wall at Turn 16 in a flamboyant moment, but that stopped him from improving from eighth in his Charouz Racing System-run car.

Haas F1 junior Arjun Maini was another to visit the escape roads as he took ninth, having topped the Bahrain practice session earlier this month.

Nirei Fukuzumi rounded out the top 10, as his team-mate Maxi Gunther suffered a brake fire as he attempted to get his car going again at Turn 15. The Bahrain sprint race runner-up's session was curtailed and he had to settle for 13th.