The 27-year-old GP2 race winner's FV8 title is his second in single-seaters after winning German Formula 3 in 2010.

He also has sportscar experience, and will race for LMP2 team Extreme Speed in the World Endurance Championship finale.

But asked about his 2017 intentions in light of his championship success, Dillmann replied: "At the moment, I don't know where I will be racing, but I hope this leads to some opportunities".

AVF could subsidise a driver capable of a championship assault and Dillmann repaid that faith by leading the standings for much of the season, only to fall behind title rival Louis Deletraz at the penultimate round at Jerez.

After signs of minor strain entering the finale, the partnership recovered harmony in the decider.

"The Spanish [stereotype is that] we always scream and shout, our emotions are really high, so sometimes when we are down we can be our own worst enemies," said Valles.

"Maybe we had some things that disturbed us, but finally this weekend we had a cold mind.

"After taking pole [for race one], the race was not the best, but we still talked to the engineers and Tom until late in the evening to try and resolve these issues."

Although Dillmann qualified six places behind Deletraz for Sunday's decisive second race, both he and Valles maintained belief.

"From the first lap, I was speaking to Tom on the radio: 'We can win this race, we are going do a good strategy, we are going to do the best pitstop of our lives... we will win the race,'" said Valles.

"We did a great stop, and Tom did an awesome drive; I think it was his best of the season. That gave us the championship." 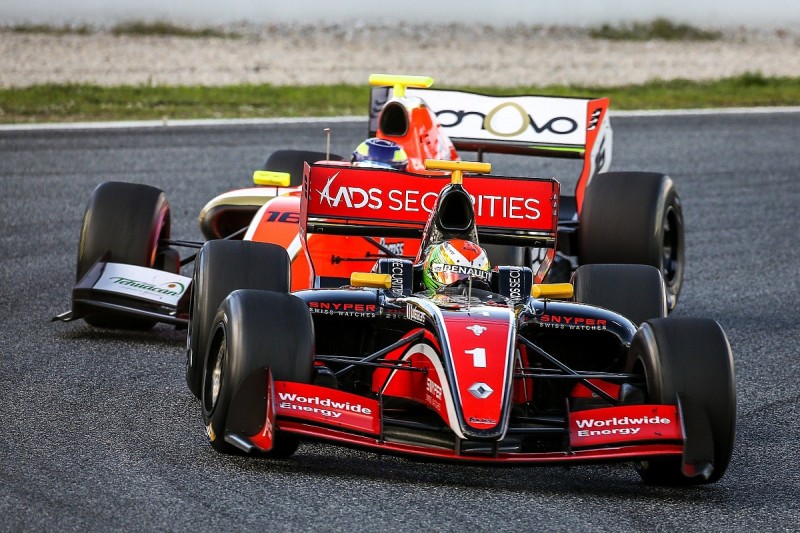 Fortec racer Deletraz, who has been linked to a move to a race-winning GP2 team for 2017, said a runner-up finish was still a bonus.

"Of course, it was hard not to come away with the title," said Deletraz. "But I never expected to do so well in my rookie year.

"We have won three races and have taken the fight for the championship down to the very end, so overall I am happy."

Renault is understood to have made a decision on which young drivers will be selected for next year's programme, but there is no timetable for an official announcement.

FV8 teams have reported significantly more interest in winter testing from drivers compared to last year, when the series' future was uncertain following the loss of Renault support.

It will join the World Endurance Championship package for much of its 2017 calendar.