Alex Lynn scored victory in a crash-strewn second London E-Prix after leader Lucas di Grassi was black-flagged for gaining his first place by pitting behind the safety car.

Mahindra Racing driver Lynn, who is fighting again to remain in Formula E next season, ran in second position onto the final of 30 laps when the Audi of di Grassi was penalised.

Di Grassi had been in eighth when a second safety car was called after reigning champion Antonio Felix was eliminated at Turn 1 after being squeezed into the pitwall by Andre Lotterer.

The Brazilian then broke from the slow-moving train on the exit of Turn 22 and hit the 50km/h-limited pitlane.

But he effectively complied with the wording of the regulations by momentarily stopping in the Audi pitbox before resuming in first place.

With the stewards arguing that he had not been stationary for long enough, di Grassi was hit with a drivethrough penalty for the safety car procedure infringement.

However, the team opted not to inform the 2016-17 champion and he carried on first-on-the-road to the flag.

This came as his Audi team, with its protest led by team principal Allan McNish, lobbied the FIA race stewards to overturn the penalty prior to the chequered flag.

But the disciplinary action was upheld, meaning di Grassi had his drivethrough converted into a time penalty, dropping him to eighth in the classified results. Di Grassi was later disqualified altogether from the second London E-Prix and Audi fined €50,000 for not serving the penalty in the race.

That ensured Lynn snared his maiden championship victory and a fifth for the Mahindra Racing squad.

The Essex-born racer, who has been dropped by Mahindra for 2022, backed up his weekend’s pole and podium on Saturday with a triumph by six tenths over Nyck de Vries.

Although, the Mercedes driver now takes the lead of the drivers’ championship ahead of the final double-header round in Berlin. 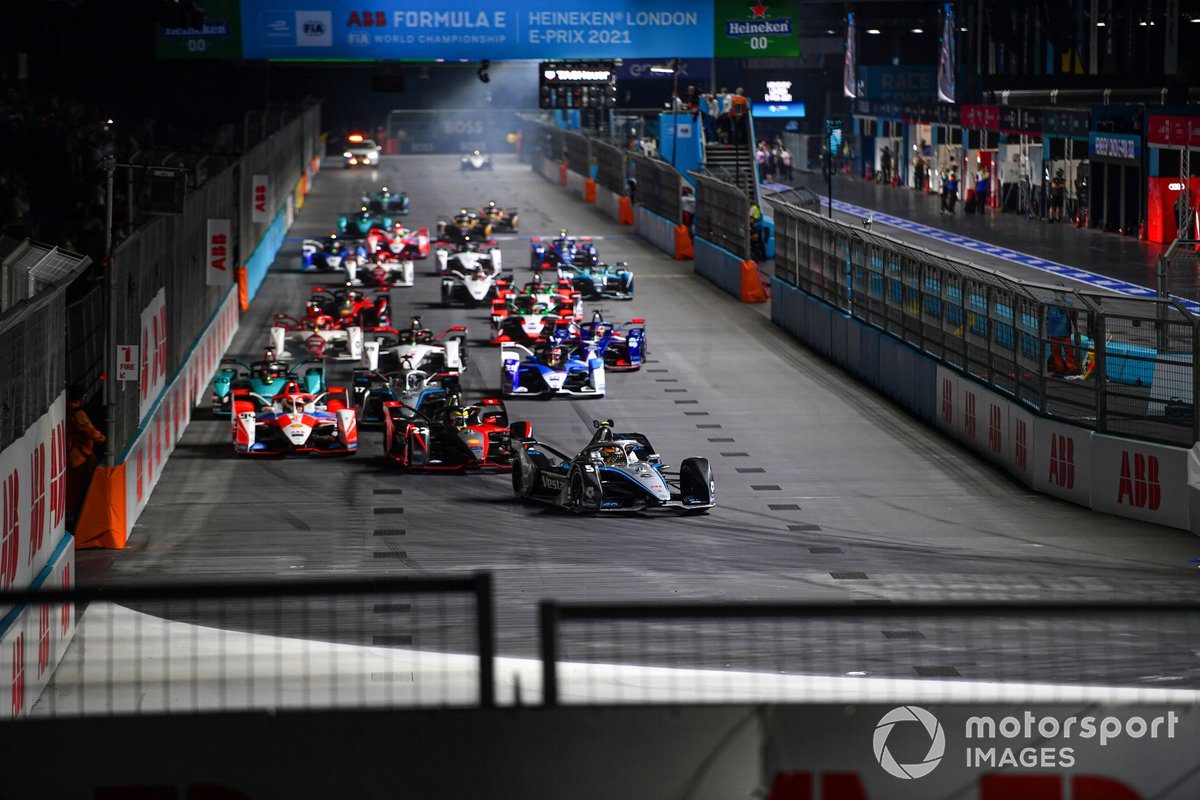 But he then took the 35kW power hike the following lap and used the boost to pass Maximilian Guenther for fourth prior to di Grassi’s dropping.

Polesitter Stoffel Vandoorne had been in early control of the race, leading through a first safety car – issued when Rene Rast was eliminated after a prolonged collision with Sebastien Buemi – before he was demoted by di Grassi and Audi’s opportunism.

But when Vandoorne complained that di Grassi was defending from the Mercedes through the Turn 10 hairpin, second-placed Oliver Rowland locked up on the approach to the corner.

At the apex, the Nissan e.dams racer then hit a bump which interrupted his steering input and he tagged Vandoorne out of second place and down to an eventual 11th.

Rowland was worse off still, eventually classifying down in 18th, with de Vries nipping through on the inside into second place behind di Grassi as Lynn sat in third.

But the Brit had the final of his eight-minute attack mode activations remaining and used the boost to close and then teamed it with fanboost to pass de Vries.

The 2019 FIA Formula 2 champion had been battling with damaged steering sustained early on when he passed Lynn for what could become the eventual victory.

Robin Frijns ran to fourth for Envision Virgin Racing, while Pascal Wehrlein profited from scrappy racing throughout the grid to take a subdued but no less solid sixth place ahead of Nick Cassidy, who finished without much of his front bodywork after a Turn 10 crunch.

Pre-race points leader Sam Bird retired after his penultimate lap shunt with Norman Nato at Turn 10 when he moved to pass on the inside.

The two cars became tangled and Bird was adjudged to have caused the collision and will carry a three-place grid drop into the Berlin opening race.