The 20-minute event was disrupted by a red flag with four minutes remaining after Norris's Carlin team-mate Jehan Daruvala crashed at the high-speed Mastersbocht right-hander.

At this point Norris sat on top of the pile, with Ferdinand Habsburg second and Maximilian Gunther third.

After the restart, there was time for two flying laps, but the second of these was also hampered when David Beckmann spun at the Turn 10 left-hander, causing a yellow flag.

Even so, Norris had already improved his previous best on his first flier by 0.233 seconds, after fellow Brits Jake Hughes and Callum Ilott had briefly sat on pole as they were further ahead on the track.

Norris's final margin over second-placed Ilott - who was just ninth before the stoppage - was 0.123s, while his pre-red-flag best was enough to earn him pole for the weekend's final race, for which grid positions are based on second-best times.

"It was good but bloody tricky in terms of not just being caught out by the red flag but also the yellow," said McLaren-Honda protege Norris.

"I was only a tenth down on my best [on the final lap] but Beckmann [who had rejoined in front of Norris] braked on the line at the chicane - I had to overtake him and lost two tenths, but it didn't matter in the end." 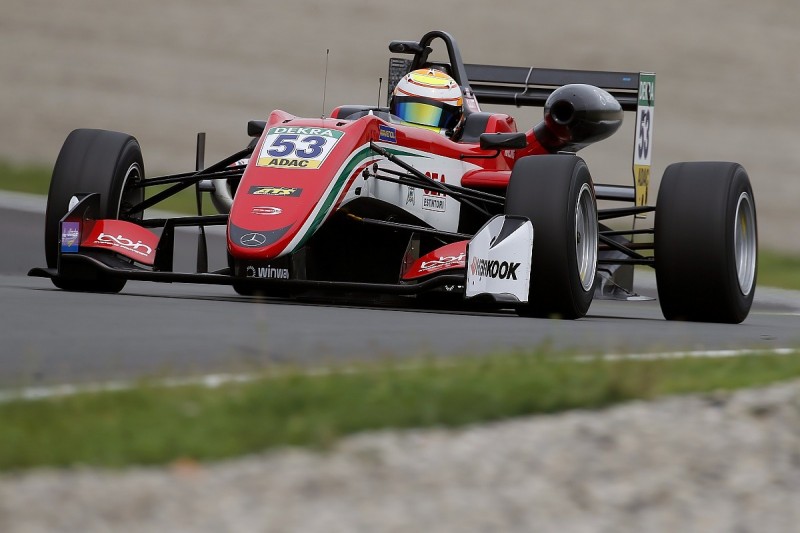 Prema Powerteam driver Ilott had a purple first sector and green middle on the final lap, but had to slow for the Beckmann-caused yellow, and his resultant time drops him to fourth on the grid for race three.

"We made a couple of changes and everyone as a team struggled with snap-oversteer," reported Ilott.

"We were just settling down when the red flag came, but it wasn't so bad at the end."

Hughes, still suffering some problems with a trapped nerve in his neck on new-tyre runs, was happy with third for Hitech GP, but is only seventh on the grid for race three.

"The car's been mega all weekend; I just couldn't drive it yesterday," he said.

Instead, it's Carlin's Ferdinand Habsburg who continues his strong weekend by joining Norris on the front row for the finale, with the Austrian fourth for race two.

Championship leader Maximilian Gunther planted his Prema car fifth for race two and third for the final race, while Hitech's Nikita Mazepin was sixth overall but down in 12th on second-best times.

Completing the top 10 for race two are Guan Yu Zhou, Beckmann, Harrison Newey and title contender Joel Eriksson, who suffered a repeat of his mid-season qualifying woes after a brief respite on Friday.

Prema's Ferrari junior Zhou moves up to fifth for the finale, with Eriksson looking better in sixth, as Hughes, Beckmann, Pedro Piquet and Ralf Aron complete the top 10.