The McLaren-Honda Formula 1 team protege had to fend off an attack from BMW junior Joel Eriksson at the restart following an early safety car, but once he had done this his Carlin Dallara-Volkswagen extended its advantage with every lap.

Norris ended up 8.974 seconds in front, with Eriksson and his Motopark Dallara-VW similarly untroubled in second.

"Obviously it's a difficult track to overtake on so qualifying was a bonus, starting from pole," said Norris.

"My restart wasn't too good so Joel tried to overtake me and I got a fairly big flat-spot on my front-right tyre [from locking up in defence], but I think it only cost me ever so slightly.

"I could pull a gap and I was pretty comfortable at the front."

"We had old tyres and Lando had two new on the left side so I think that gave him some advantage," said Eriksson.

"I did my best to pass him after the safety car, but second was the best we could get today."

The safety car was caused by a spectacular crash into the opening Tarzanbocht turn.

Guan Yu Zhou, who had started eighth on the grid, ran into sixth qualifier Ralf Aron, who in turn pitched seventh starter David Beckmann into the gravel trap - with the gravel wet following overnight rain, Beckmann flipped over and the car dug in, although the diminutive German emerged unscathed. 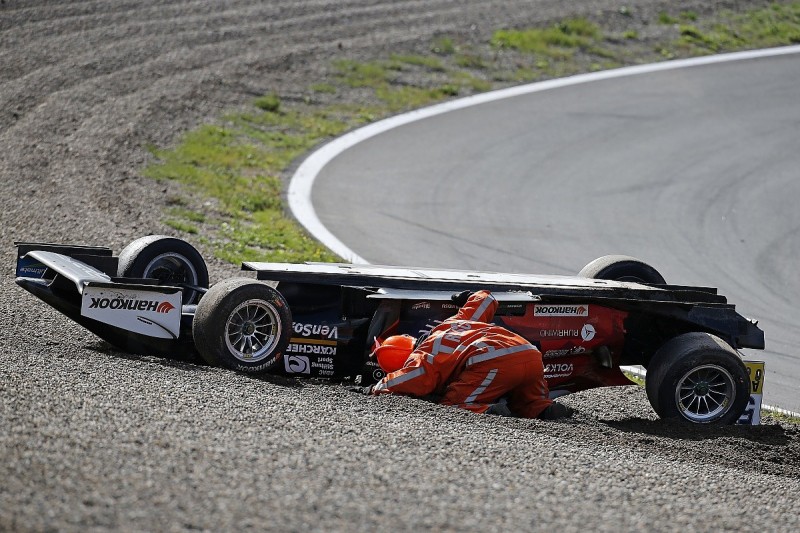 Aron was also marooned in the gravel and out of the race, while Zhou was given a drive-through penalty after being judged to be at fault for the accident.

Maximilian Gunther retained his championship lead with third position in his Prema Powerteam Dallara-Mercedes, although the gap to Norris has narrowed to just eight points.

Gunther's Prema team-mate Callum Ilott lost fourth place at the restart to Ferdinand Habsburg, who had made a poor start from a damp patch on his front-row grid spot and dropped down the order to fifth.

Ilott threw everything into repassing the Carlin-run Austrian noble, including a side-by-side run through the Tarzanbocht, but to no avail.

After Zhou took his drive-through, Van Amersfoort Racing's Pedro Piquet and Hitech GP man Jake Hughes - driving in pain with a trapped nerve in his neck this weekend - put the pressure on Schumacher, but there was no change in the order.

This in turn allowed the Carlin car of Jehan Daruvala to close up in ninth, while VAR's Harrison Newey fended off Nikita Mazepin to claim the final point.