Prema dominated the three F3 races at the Nurburgring last year with a hat-trick of wins for Felix Rosenqvist, and continued that dominance with first, second, fourth and sixth in the opening race.

Stroll, who inherited pole position for the race, went virtually unchallenged after a strong getaway, and crossed the line with a gap of 6.648 seconds over Gunther.

Nick Cassidy looked set to join his Prema colleagues on the podium, but the New Zealander slowed momentarily with around 10 minutes of racing to go when his car went into Virtual Safety Car mode, and dropped from second to fourth behind Gunther and Hitech GP's George Russell. 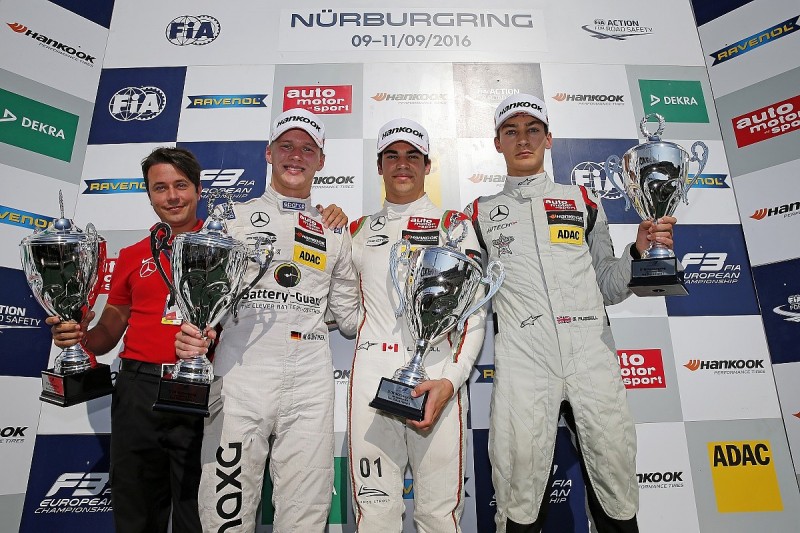 The issue gave Callum Ilott the opportunity to close up on Ralf Aron, and the Van Amersfoort man swept round the outside of the Estonian in the Mercedes Arena.

The Brit then set about chasing Cassidy for fourth place, and he looked like he might get the move done when Cassidy missed the final chicane.

However, there were too few laps remaining, and the pair finished as they were in fourth and fifth; the gap just 0.510s.

Aron was sixth in the fourth and final Prema car, with rookie-of-the-year candidate Joel Eriksson in seventh ahead of Motopark team-mate Niko Kari, Ben Barnicoat ninth, and Anthoine Hubert completing the top 10.

Having set the fastest time in qualifying for the race before his engine penalty was applied, Red Bull junior Sergio Sette Camara was unable to make up ground from 11th, where he started and finished.