In a race that refreshingly ran free of safety cars, the Canadian Williams Formula 1 protege drove his Prema Powerteam Dallara-Mercedes at a relentless pace throughout.

Stroll even set a fastest lap of the race quicker than his pole-position time on the final lap, as he crossed the finish line 7.559 seconds clear of second-placed George Russell.

"I got warned once for track limits, which I was a bit surprised about," said Stroll.

"So it took it carefully and then on the last lap I was able to risk a bit more.

"It was a really good race, and I was able to maintain a good pace."

The gap between Russell and Ilott ebbed and flowed throughout the race, without Ilott ever getting close enough to mount a serious challenge.

Russell had a more aggressive set-up in a bid to challenge Stroll, but with the surprise lack of safety cars this meant his pace faded and he had to pull out all the stops to hold off Ilott as the race wore on.

Ilott, cautious at the start, admitted: "It was good to finish after being in the gravel quite a bit - it was a tough race, and I almost lost the car three times." 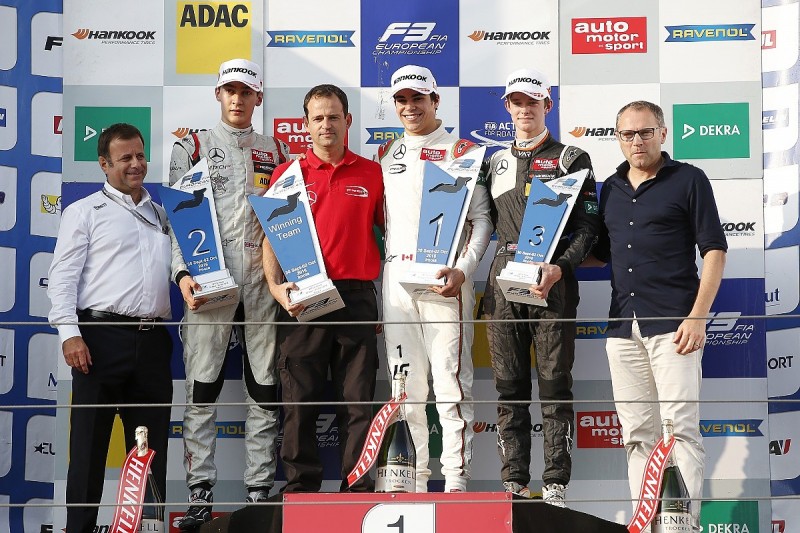 Prema's Ralf Aron continued his return to form with his second fourth place of the day, after beating Joel Eriksson away from the line.

The Motopark machine of Eriksson put Aron under serious pressure in the opening laps, but the Estonian weathered the storm, although Eriksson remained close in the battle for rookie honours.

Behind them came the race's best entertainment.

David Beckmann went on an overtaking spree early on but, once he'd got up to ninth, the Mucke driver then found himself forced to defend from Motopark's Ferrari junior Guan Yu Zhou.

Sergio Sette Camara and Maximilian Gunther, both fighting through from penalised grid positions, closed in to make it a scrapping quartet, but Beckmann's resolute defence paid off as Zhou completed the points scorers.

Ben Barnicoat, penalised three places on the grid for an incident with Jensen in race two, headed this bunch early on but dropped down the order with a lack of pace.

Niko Kari, winner of the first race of the weekend, went out on the opening lap.