Jake Hughes emerged on top in a dramatic FIA Formula 3 sprint race at Monza on Sunday, as championship frontrunners Oscar Piastri and Logan Sargeant retired due to separate incidents

At the start of the race, Lirim Zendeli made a quick getaway from fourth on the grid to take the lead into the first chicane, with Enzo Fittipaldi slotting into second after clearing polesitter Michael Belov.

On lap five, Fittipaldi managed to pass Zendeli with a brilliant move around the outside of the second chicane, only for the Trident driver to retake the lead into Turn 1 on the following tour.

Fittipaldi launched a second attack two laps later heading into Parabolica, with Zendeli allowing him through with the aim of getting the slipstream on the start/finish straight.

Fittipaldi somehow managed to hold the lead going into the first chicane, but Zendeli's front wing clipped the left-rear tyre of the HWA driver, leading to a puncture that dropped the Brazilian out of contention.

Red Bull junior Liam Lawson, who was running right behind in third, jumped on the opportunity to pass Zendeli for the lead, but was later penalised 10s for not giving the Trident driver enough room.

Hughes assumed second after Zendeli went straight at Turn 1 on the following lap and then demoted Lawson into Turn 1, taking a lead he held to the end for his second victory of 2020. 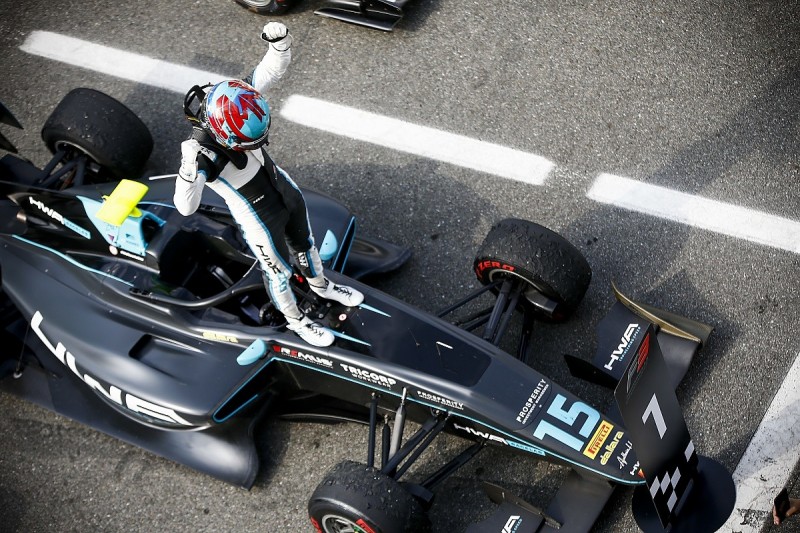 ART's Theo Pourchaire dropped to 17th at one point, but delivered a masterful recovery drive to claim third on the road, although this later became second when Lawson's penalty demoted him to seventh.

Pourchaire's team-mate Alexander Smolyar also passed Zendeli a few laps from the finish to take the final spot on the podium.

The race also featured a treble DNF for Prema, as Sargeant's tangle with team-mate Frederik Vesti meant he was unable to capitalise on dramas for championship leader Piastri.

The Australian, who had charged from 15th to third in race one, was battling with Carlin driver Clement Novalak when the reigning BRDC British F3 champion pitched him into a spin at the exit of Turn 1, resulting in further contact with Belov's Charouoz car.

The damage to Piastri's car was too major to continue, but his misery was compounded by a 10s penalty - converted into a five-place grid drop for the next round at Mugello - for forcing David Beckmann off the track at Turn 5.

However, Piastri's championship lead remained intact after Sargeant was clipped by race one winner Vesti heading into the Ascari chicane and suffered a puncture that eventually led to his retirement.

Vesti didn't escape unscathed either, and had to pull into the pits to retire with front wing damage, with Sargeant being given a three-place grid drop for Mugello.

The attritional race allowed Alex Peroni to finish sixth for Campos, ahead of Pierre-Louis Chovet (Hitech) and Roman Stanek (Charouz).