From the front row, Ticktum this time made a better start than poleman Ahmed, but Marcus Armstrong made his traditional fantastic getaway from third on the grid.

Ticktum, Ahmed and Armstrong ran three-abreast down to Turn 1 before Ahmed, in the middle, backed out.

Ticktum was on the inside, but locked a wheel and ran wide, so he was level with Ferrari protege Armstrong through the corner.

They collided on the exit, giving the Prema Powerteam car of Armstrong race-ending damage.

As Ahmed slipped through to lead, Alex Palou and Robert Shwartzman passed the recovering Ticktum, only to collide at Turn 2 - Shwartzman was out, while Palou was forced into the pits and rejoined, before stopping at half-distance. 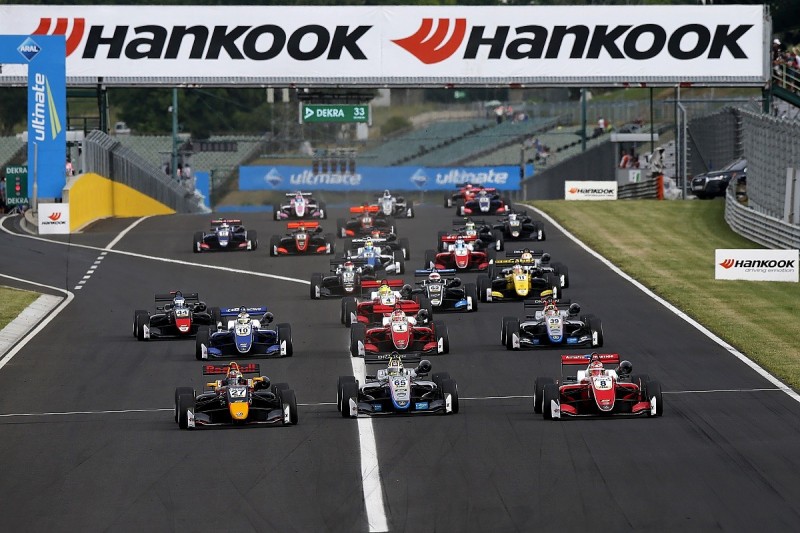 Now Ticktum was back up to second, and the Motopark driver took advantage of a full-course yellow - called for the stricken car of Shwartzman - to be right on the tail of Ahmed when the race went green.

But Ahmed soon began building up an advantage, and his Hitech GP Dallara-Mercedes sailed into the distance.

"I had a really bad start - it was horrific," said Ahmed.

"Dan passed me and Armstrong came to my left, but they touched and I just carried on racing.

"If Dan had stayed in the lead he'd have pulled away, because it's impossible to follow on this track.

"Since Friday I've been busting my balls to be quick on this track, and to be so close to Dan is so good - he's really quick, as he always been since we came up through karting together."

Ticktum was shadowed for most of the race by Mick Schumacher, who as usual showed great judgement on the opening lap to rise from ninth to third - but that was as far as the Prema driver got.

Motopark's Juri Vips was another to have a strong opening lap to rise to fourth, but fell away from Schumacher, although he was never troubled by Prema-run Ferrari junior Guan Yu Zhou.

Carlin's Sacha Fenestraz was sixth, while Prema driver Ralf Aron pulled off a fine manoeuvre on the Motopark machine of Fabio Scherer to take seventh.

Behind Scherer, Jonathan Aberdein (Motopark) was ninth, while Nikita Troitskiy claimed his maiden Euro F3 point in his Carlin car after setting fastest lap in the second race of the weekend.

Two more Carlin drivers had troubled afternoons. Jehan Daruvala stalled from his second-row starting position and spent his race battling through the midfield to 11th, while Ferdinand Habsburg dropped to the back after a first-lap clash with Hitech's Ben Hingeley, who was forced out due to the damage.