Hitech GP racer Ahmed was attempting to take third place from Aron on the Kemmel straight on the 13th lap of 15 in Friday morning's opening race when the Prema Powerteam car of Aron appeared to move very slightly to the left on the approach to Les Combes.

Contact between the two damaged Ahmed's right-front suspension and forced him to retire to the pits, while Aron continued with a suspected left-rear puncture, although the tyre was found to be undamaged after the race.

"I was fast, and the car was fast," said Ahmed, who had risen from seventh on the grid.

"I pulled left to overtake and he came across on me and broke my suspension."

Ahmed compared the incident to his collision at the Norisring while battling for the lead with Prema's Robert Shwartzman.

Shwartzman was forced into the wall at the Turn 1 hairpin after contact with Ahmed, and Ahmed was given a penalty post-race that relegated him from second position out of the points.

"I've got taken out today at 240km/h [149mph]," he told Autosport, "yet I got a penalty for something I think wasn't a dangerous manoeuvre.

"What happened today was worse than what I did, which was at about 40km/h [25mph] - at Norisring I barely touched the guy yet I got a big penalty for it."

Aron told Autosport: "I knew he was on my left, but I didn't see him in my mirror.

"I thought he was wider and I started moving and them boom - I thought, 'Oh shit.'

"To be honest I'm incredibly lucky to finish."

Ahmed was not the only Hitech driver forced out of contention in a collision with a Prema car. 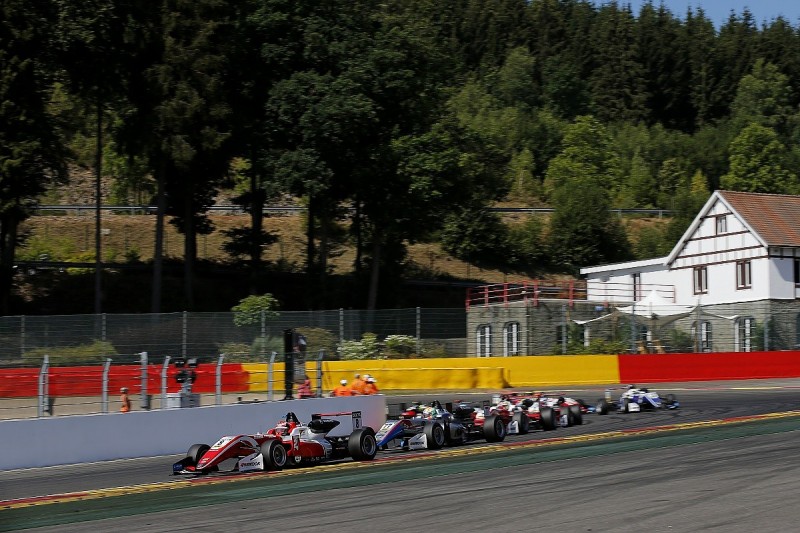 Ben Hingeley damaged his front wing in a clash with Marcus Armstrong at Les Combes as they battled for third on a safety-car restart, and pitted to have it replaced, while Armstrong retired with a puncture.

"I went to the outside and it felt like he just gave me room, but it touched the front wing," said Hingeley.

"What makes it even worse is that after my front-wing change we were the quickest lap for lap, but these things are sent to test us."

Two drivers have taken penalties for collisions in the race.

Jonathan Aberdein has been docked three places on the grid for race two for his collision with Motopark team-mate Juri Vips, while Sophia Florsch has been given a 20-second penalty for a collision with Ferdinand Habsburg at Les Combes that sent the 2017 Spa winner crashing into the tyre wall.