Villeneuve: Kvyat should be dropped by Toro Rosso Formula 1 team

Kvyat collided with team-mate Carlos Sainz Jr on the opening lap of the British Grand Prix after he ran wide in the Becketts sequence and came back onto the track while Sainz was alongside him.

The incident put Sainz out of the race and though Kvyat continued with a damaged car, he was handed a drivethrough penalty for rejoining the track in a dangerous manner.

Kvyat said he felt Sainz could have anticipated the situation and avoided a collision, while Sainz said he would rather discuss the matter privately with Toro Rosso instead of stating his view in public.

"I'm not sure what Kvyat is trying to do," Villeneuve, the 1997 world champion, told Autosport.

"Do you know what the worst aspect of it is? He then comes on the radio trying to put the blame on his team-mate, thinking no one has seen it.

"That shows a bad attitude. He deserves to stay home. It has become embarrassing.

"He got sideways when he got back in the next corner and if Sainz had not been there, he would have gone off anyway.

"He should be left home for a bit so he can think about it because it's not the first weekend he's been a bit over the top. 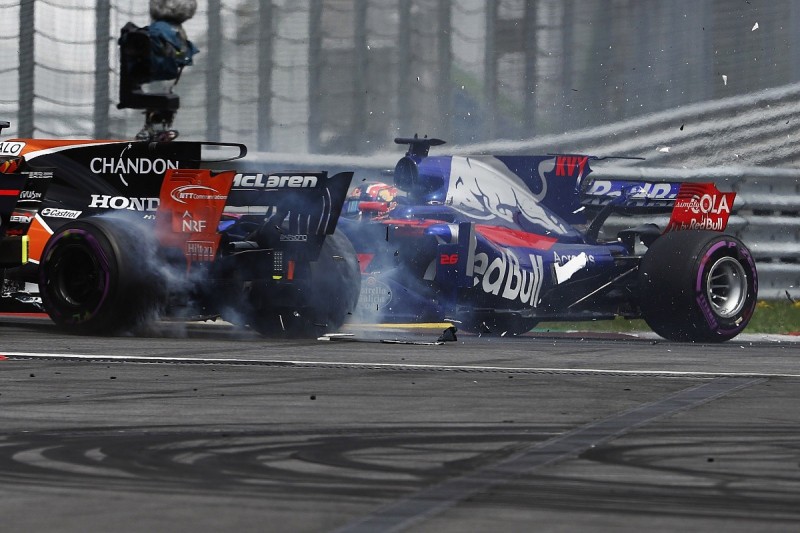 The collision came a race after he was given a drivethrough penalty for rear-ending Fernando Alonso's McLaren at the start in Austria.

Earlier in the year, he was penalised for reclaiming his grid position having failed to pull away at the start of the formation lap in Canada.

When asked if he felt stewards were punishing him in particular, Kvyat replied: "I believe so."

But Villeneuve thought that was the wrong approach.

"If you keep pointing the finger, then you never learn," he said.

"You should always blame yourself, even when it's not - that's the only way you can make yourself better.

"When it's clearly 100% your fault, and by a huge margin, the attitude of trying to put the blame on someone else makes it pathetic.

"Normally drivers don't even get a second chance - he's had plenty and he doesn't seem to learn."