Sebastian Vettel and Charles Leclerc have labelled their Ferrari as "difficult" and "a handful" to drive, as they brace themselves for a tough Italian Grand Prix

While Ferrari seems to be slightly more competitive than it was in Belgium last weekend, the duo still faced a difficult first day of running at Monza as both had their moments at the Lesmo corners.

Vettel ended up 19th overall in first practice before moving up to 12th in the afternoon, having spun exiting the first Lesmo, while Leclerc was ninth quickest in FP2 having also endured an off-track excursion in the afternoon session.

Reflecting on the day, Vettel said that the Ferrari SF1000 had not been particularly easy to extract lap time from.

"Well the car is difficult to drive, but as I said, it's not the first time," said the German. "So where are we lacking? I think we're losing down the straights, which is expected.

"We are lacking grip on corner entry with pretty much all four wheels. The car is sliding quite a lot. And it's a handful. But yeah, it's very difficult to get everything right to get the lap together. But we're trying to make it a bit better for tomorrow." 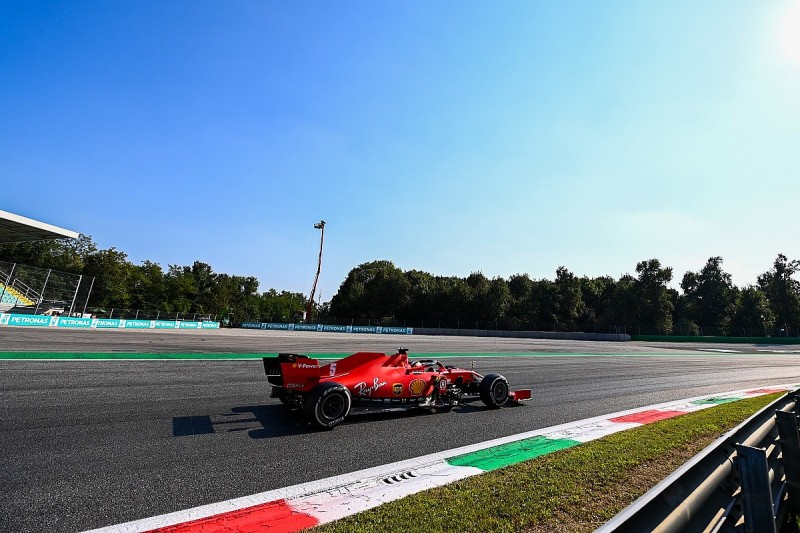 Leclerc said that the Ferrari seemed to be better on single lap pace than in race trim, as he felt Sunday could be especially difficult.

"So we definitely need to try to find something for the race, otherwise it's going to be very, very difficult.

"We seem to struggle quite a lot with the balance and the overall degradation of the tyres during the high fuel run. So there's definitely a lot of work on that.

"But I am quite positive to see our qualifying pace. It was very difficult to drive on the high fuel. That's why I was saying there's quite a bit of work, but I'm pretty sure we'll find a solution to try and fix this."

Vettel reckoned that Ferrari's plight in race runs was not helped though by an increase in front tyre pressures for this weekend compared to last year.

"I think part of a contributor for that [challenge] in the race is obviously the balloon pressures that we are forced to run at," he said. "That doesn't help.

"It's far away from where I think the tyres would like to run. But yeah, we have to obviously stick to the rules and apart from that, it will be a tricky one in the race."