Toro Rosso's development of its Formula 1 car has not been "as fast as expected", its driver Daniil Kvyat has admitted

The Red Bull junior team has scored 40 points this season, but 29 of those were notched in the opening six grands prix and only 11 in the six since.

In that time it has slipped from fifth in the constructors' championship to sixth, behind Williams, and has been outqualified by the improving Renault and McLaren - and Haas - in recent grands prix.

Asked by Autosport how he felt about the second half of the season and Toro Rosso's development prospects, Kvyat replied: "To be completely honest it hasn't been as fast as expected, our development.

"We are lacking a little bit in that respect.

"I remember being an easy Q3 car in the beginning, the first few races, and now it's quite hard.

"Qualifying is very important this year, so we need more.

"The guys know what to do and other tracks which are a lot more favourable to us are coming anyway." 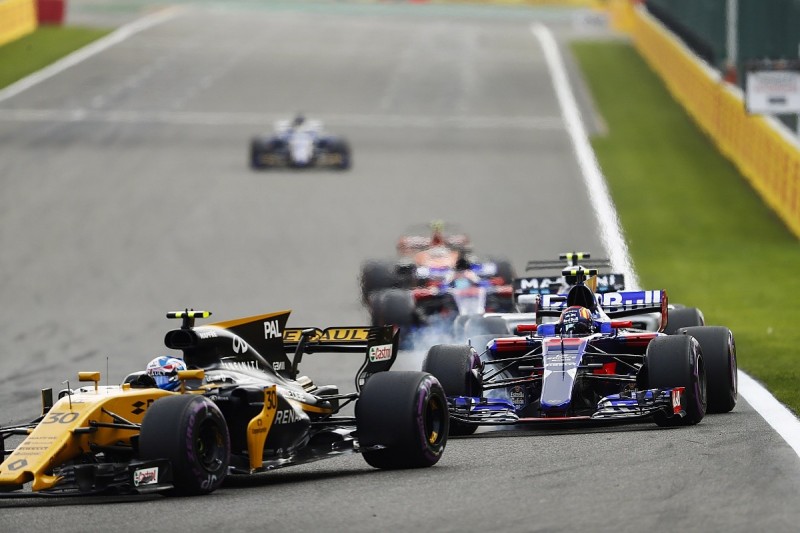 "I don't think it's fair for my team to be compared to a manufacturer like Renault," said Sainz when asked by Autosport if Toro Rosso was losing development direction.

"If we compare ourselves to Force India for example, in places like Hungary where the engine is not so important we had the better of them.

"From what I can see [at Spa] on the data they are not faster than us through the corners.

"McLaren and Renault are the ones who are bringing loads of downforce into their cars and making the difference in the corners compared to us."

Renault introduced a new floor for the British Grand Prix, which Sainz said meant "all of a sudden this half a second [gap] appeared".

Sainz believes Renault and McLaren will edge clear but reckons Haas and Force India, which both beat Toro Rosso at Spa, can be matched.

Asked if he feared his season petering out as his 2016 campaign had, Sainz replied: "I don't know. I tend to think that from now onwards, McLaren and Renault are likely to be ahead of us in qualifying.

"Especially when we go to tracks less engine-dependent, McLaren will take a big step forward.

"Renault is half a second in front, but on the other hand Force India, Haas we can control them.

"Force India scored a lot of points at the start of the season so they are out of reach in terms of points, but not pace.

"We have still an upgrade to come, so hopefully this will help us."