While Red Bull-Renault driver Max Verstappen's retirement from fifth just seven laps into the race was the highest-profile issue at Spa, there had been problems for Renault-powered teams throughout the weekend.

Toro Rosso's Daniil Kvyat had an engine failure in Friday practice (pictured below) and Jolyon Palmer's factory car had gearbox problems at the start of Q3.

Immediately after the race, Abiteboul was seen in an animated discussion with Red Bull Racing team principal Christian Horner.

With Nico Hulkenberg finishing sixth for Renault and 'best of the rest' for Renault, Abiteboul said reliability was a much bigger worry than speed now.

"Basically we're not too bothered by the performance of our car anymore, we're extremely bothered by the reliability which hit Jo on Saturday with the gearbox, and which was also hitting the different engines on the grid," Abiteboul told Autosport.

"That's a concern. For me it's still the sort of fragility of the Renault programme in general that needs really to be addressed as a priority.

"Performance is where it needs to be given our map. Reliability is not." 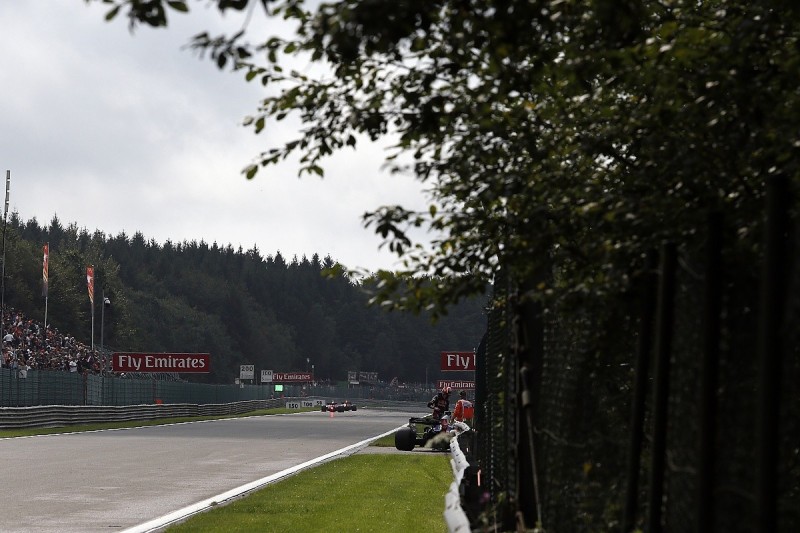 Horner and Verstappen both expressed their frustration with Renault at Spa, which Abiteboul said he understood.

"Obviously there is lots of frustration coming from the drivers, just after the event," he said.

"If you go a bit further into the details it's different types of issues that are impacting the driver, and therefore you cannot attribute to one single issue all the difficulties that have hit either Jo or Max, talking about the engine, since the start of the season.

"But it's not acceptable, it's not where we want to be from a reliability perspective, and it has to be the focus for all customers."

He was relieved that the factory Renault team is now consistently emerging at the head of the upper midfield pack, with Hulkenberg's sixth place at Spa his second such result in the last three grands prix.

"This is where we think we are, and it's good to see it both on a Saturday and Sunday," Abiteboul said.

"I would sign up to this sort of constant fourth position in a virtual championship.

"Our target is still to recover from the very bad position where we are because of the reliability issues."

What Vettel's surprise means for the F1 driver market