The fight for the 2018 Formula 1 title, which resumes in Belgium this weekend, is one of the most intense in the past decade

There has been little to separate Mercedes and Ferrari - despite employing very different car philosophies - as each has seized the initiative at various points, with neither able to establish itself clear at the front.

Before the battle resumes, Autosport looks back at each team's development progress - with the help of Giorgio Piola's exclusive illustrations - to consider which factors could make the difference in the title run-in.

Mercedes' W08 was dogged by tricky characteristics in 2017, leading Toto Wolff to call it a 'diva', and as such the validity of carrying over its wheelbase was questioned, as the car's length was seen as a contributory factor to its weakness at certain tracks.

But technical director James Allison said it was a "no-brainer" to retain the concept, with more to be lost than gained by adopting a new development trajectory - especially as Ferrari was in such close quarters throughout 2017.

It was a surprise, then, when Ferrari's 2018 challenger was unveiled and featured a similarly long wheelbase. The SF71H had grown by more than 70mm compared with its predecessor - a decision driven by Ferrari's quest to reduce its own weaknesses.

"If we take stock of what we did last year, in low-speed tracks we always did well, while in circuits where the speed was higher we were suffering a little bit more [relative to Mercedes]," said technical director Mattia Binotto.

It would be unfair to attribute the W08's diva moniker to just one factor, as before the season had even started a technical directive regarding suspension systems was believed to have wiped out an area where the team (and Red Bull) had an advantage over Ferrari.

The systems, which carried some of the DNA of the previously outlawed FRIC effect, helped improve the aerodynamic output of the cars. This ruling appeared to hobble Mercedes, which had perhaps the most advanced system.

For 2018, Mercedes made some changes in this regard, slightly offsetting and interlinking the front suspension rockers so the suspension could be more accurately controlled. 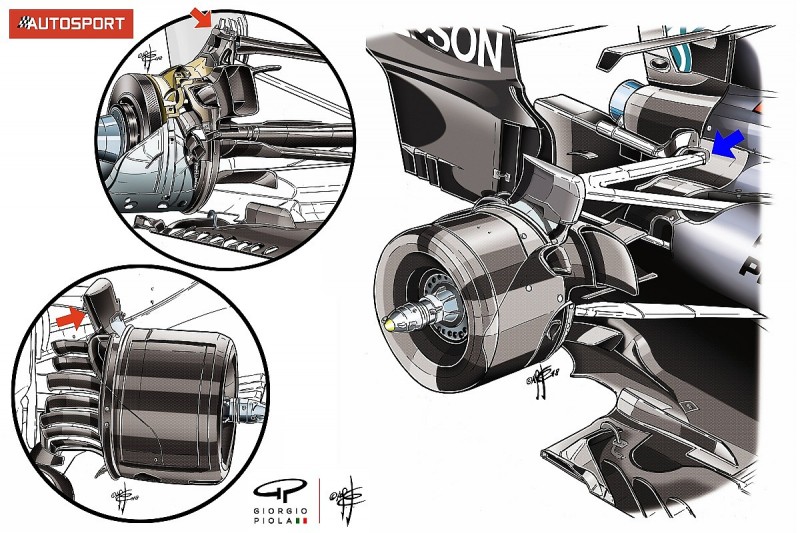 At the rear of the car, the team decided to raise the position of the upper wishbone, as it had at the front in 2017. This resulted in an extension sprouting out of the upright (red arrow) and a raised inner connecting point (blue arrow). 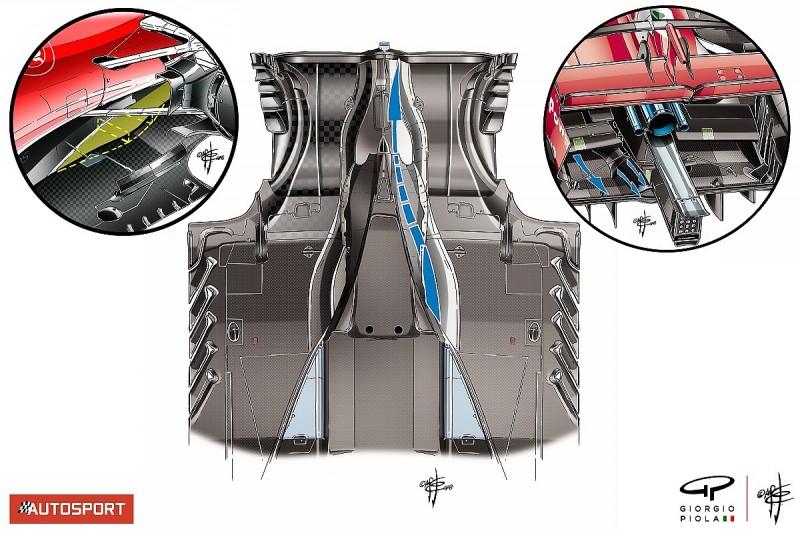 Ferrari took advantage of its longer wheelbase to make changes around the rear of the car for aerodynamic purposes. This included a floor channel, used in previous Ferrari cars (SF16-H, left inset), which improved flow around the car's coke bottle region.

But Ferrari planned to make its biggest step around the midriff area of the car - perhaps taking cues from its main rival - as it increased the complexity of its bargeboards and the floor's leading edge. 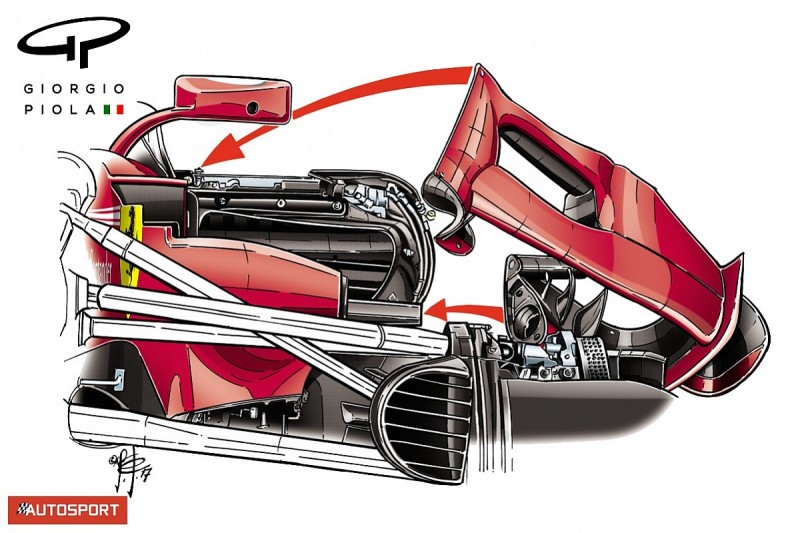 It was also able to improve its sidepod design - which had already impressed the paddock in 2017 - due to new dimensional freedoms. Mercedes persevered with a more conventional sidepod layout, although in a video introducing the W09 Allison suggested changes made in this area for 2018 were worth 0.25 seconds. 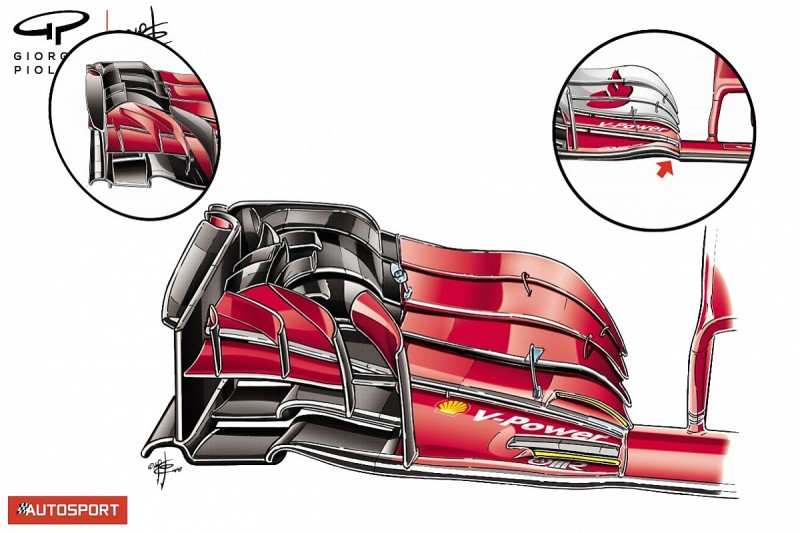 Ferrari began the season with a new front wing philosophy, discarding the arched section next to the neutral section (arrowed, inset) and replacing it with slots in the same area (highlighted in yellow).

The shape of the outboard tunnel section was also revised, as designers sought to alter the shape of the wake generated by the front tyre (left inset). 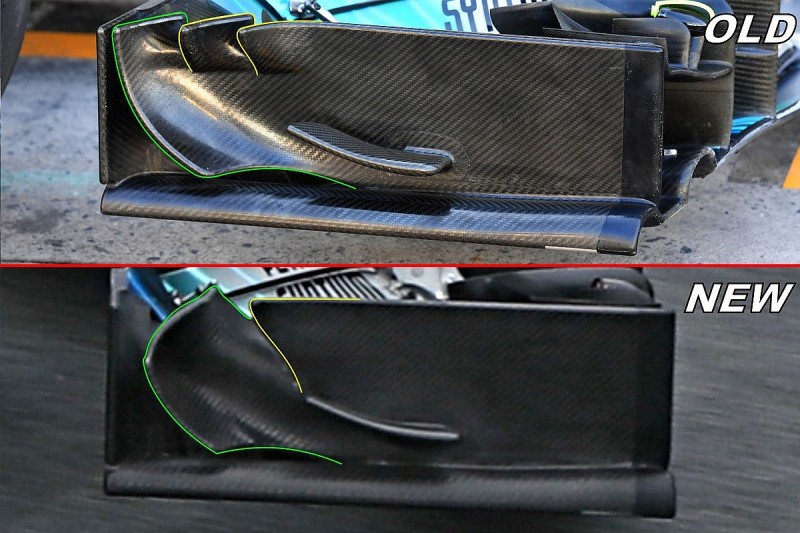 Mercedes revised its front wing endplate too, adopting a draped section at the rear (highlighted in green), that altered how the airflow outwashes around the front tyre.

Both teams made their first major aerodynamic changes of 2018 in Azerbaijan, abandoning their conventional rear wings in favour of spoon-shaped variants designed to reduce drag. 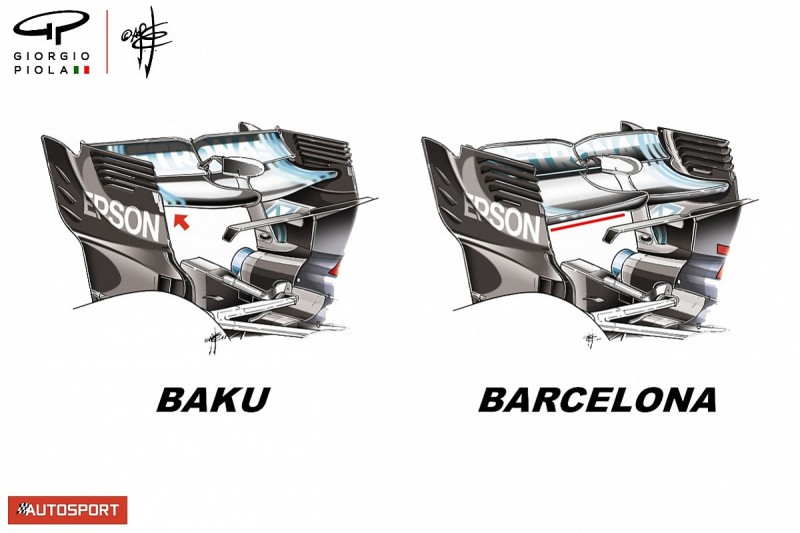 At the Spanish Grand Prix, a development waypoint for all teams as the first European round of the season, both reverted to high-downforce rear wing designs. Ferrari, however, pushed the design envelope as it used controversial halo mounted mirror supports.

It had already been forced to make adjustments to a unique two-piece design in Azerbaijan in order to comply with regulations, but its new supplementary mirror supports were even more divisive, leading to them being banned from the next race. 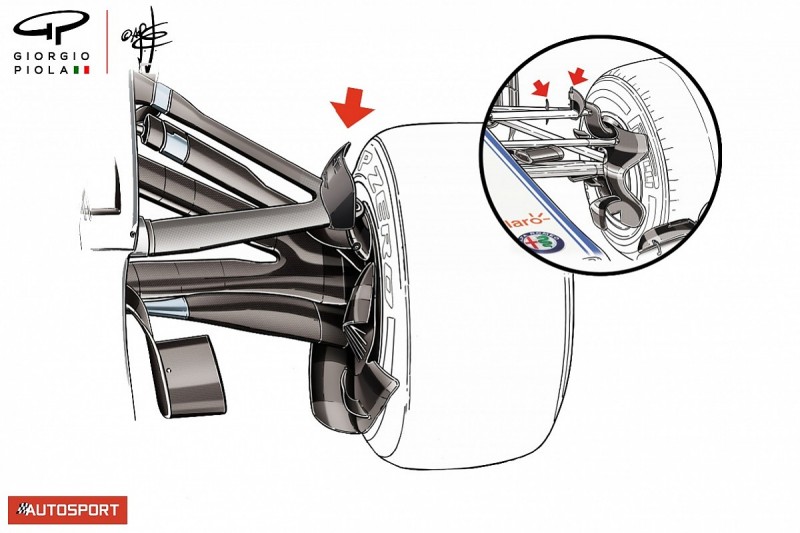 Mercedes added another small aero trinket to the upper arm of its front suspension, an idea that had emerged on the Sauber (inset), which had itself converged on the Mercedes/Toro Rosso style high-mounted wishbone arrangement introduced in 2017.

Ferrari removed the upper winglet style mirror supports in Monaco, but they remained affixed to the halo, rather than the chassis.

Meanwhile, Mercedes added a cluster of vortex generators to the top surface of its sidepods in order to make it work harder at the lower speeds it would encounter around the principality. 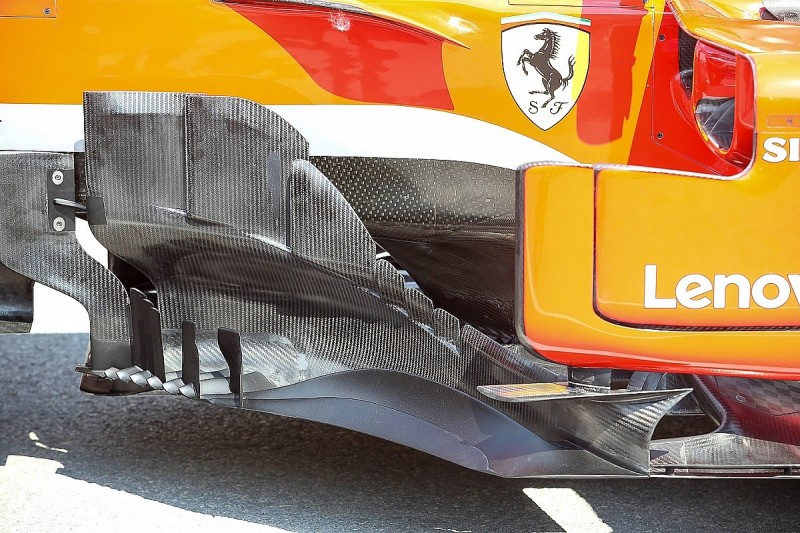 Ferrari upped the ante in Canada, when it introduced a more aggressive bargeboard package and reorganised the slots in its splitter extension - an update that was even more potent than the team envisaged.

It followed this up with another long-lead item in France, introducing a new front wing with a full-length slot in the mainplane that altered the wing's pitch sensitivity.

There was also a revised outer-arched section and a new endplate canard configuration, both of which altered how the airflow moves across and around the front face of the tyre.

In comparison, Mercedes chose to stave off the introduction of any serious aerodynamic development parts, with only a small change made to one of the front brake duct winglets. 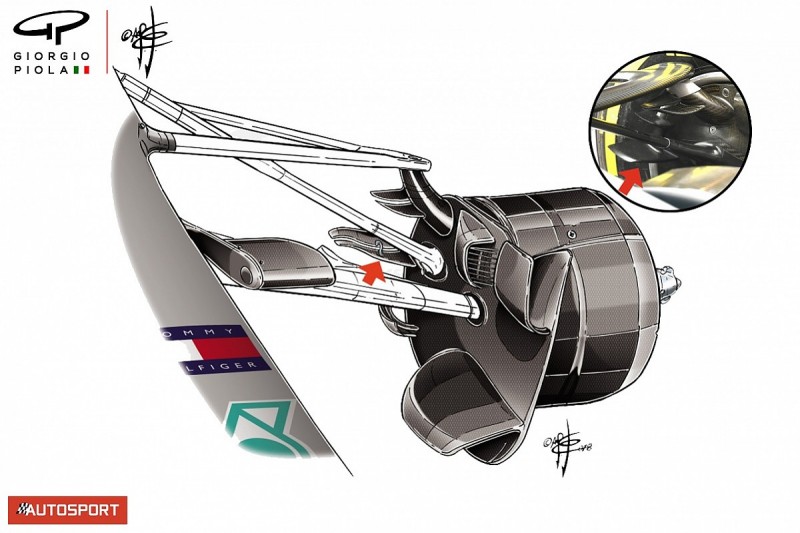 This was in-part due to the arrival of its second generation power unit, which had originally been planned for Canada but was delayed due to reliability concerns.

In Austria, Mercedes unveiled its largest update of the season, altering the shape of its sidepods to push the inlet back. This helped lessen the impact of front tyre wake on the flow around that area of the car.

The mirrors and their mounting stalks were also adjusted in order to suit the new bodywork and take advantage of any secondary aerodynamic effects that were on offer.

It also introduced a new rear wing, which featured an endplate design reminiscent of the one used by McLaren since 2017, increasing the wing's yield at higher downforce circuits.

Ferrari responded at Silverstone, as it introduced a new floor, featuring another full-length slot on the edge that blended into the angled 'tyre squirt' holes ahead of the rear tyre.

The intent was to seal the edge of the floor, creating an air skirt that encloses the airflow under the floor and diffuser. It also amended its rear brake duct winglet, fully separating it into three sections, rather than just having slots in the end fence.