Alonso overtook Raikkonen for sixth place in the closing stages, having caught the Finn on fresher tyres by virtue of stopping three times compared to his team-mate's two pitstops.

Earlier in the race Alonso had been able to make the first pitstop of the pair despite running behind Raikkonen on the road. Teams often give pitstop choice priority to the driver who is ahead on track.

On team radio messages from the slowing-down lap broadcast to television audiences, Raikkonen asked "who made these calls?" as he felt he was getting "second choice".

Asked by AUTOSPORT to explain the messages and whether he felt Alonso was getting priority, Raikkonen replied: "I just wanted to clear up some things."

The Finn played down the significance of the differing strategy choices and being beaten to sixth.

"Obviously there was not much between it," Raikkonen said. "We still finished far away from the others. It did not make much difference to the result."

ALONSO 'ONLY THINKING ABOUT VETTEL'

Alonso insisted that his strategic priority had been to beat Sebastian Vettel's Red Bull, not to try to win an intra-team war. Vettel managed to jump Alonso at the final stops and pulled away to take fourth.

"I don't know how the tyres were for Kimi, but for me after two or three laps I had a very difficult rear end so was asking when we could stop," said Alonso.

"When it was time, we stopped. Then I had traffic and because of that I didn't pass Kimi.

"In the second stint I finished the tyres again and asked when we could stop. They said we could keep going or do two stops, or we stop and do three. 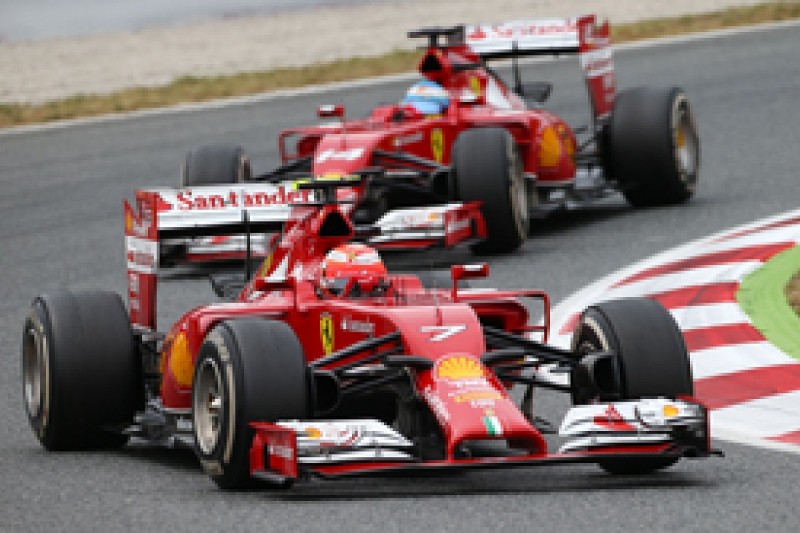 "They said Vettel was on three so if we stopped now, we covered him. And I said 'we do it'.

"I tried to protect the position from Vettel and it was not possible. The intention was just to keep Vettel behind once we'd changed strategy. We didn't manage it and it was a shame."

Although Raikkonen was closer to Alonso in Spain after being outperformed by some margin at the preceding race in China, the Finn said he was more concerned with Ferrari's poor overall position.

"It's just a different race. We're trying many things and it was a bit better, but we are still sixth and seventh," he said.

"We had some chances to fight but we are still far away from where we want to be. Overall we were the fourth-quickest team, so it's disappointing.

"But there were some good points over the weekend compared to the last race."