The Red Bull driver endured a troubled weekend at Barcelona, starting with an electrical problem that left him sidelined for much of Friday.

His qualifying session was then cut short by a gearbox issue, which in turn led to a five-place grid penalty for a gearbox change.

But despite the lowly starting position, Vettel was able to charge through the field, a well-executed three-stop strategy and some aggressive racing helping him to fourth place.

"It was definitely more fun than in the last race when we had to let people by," he said.

"We were quite happy with the car in the race. We had to be patient. It's very tricky when you sit in a train - the car slides, the car in front of you slides, and you lose grip.

"Once the traffic was clear, we were able to use the pace. We had a good strategy and had two sets of softer tyres at the end and we could get past some people.

"I enjoyed it a lot and I think fourth is the best we could get today."

Vettel added that while Mercedes is currently out of reach, he had not given up on bridging the gap this season.

"[Mercedes] have a very good package with the engine, car and two very good drivers. All in all that makes them so strong and difficult to beat," he said.

"But it would be quite sad to go into the weekend and just aim for third. I think this weekend from the team point of view was good with third and fourth, but at the next race we'll attack again."

RICCIARDO SATISFIED TO BE 'BEST OF REST' 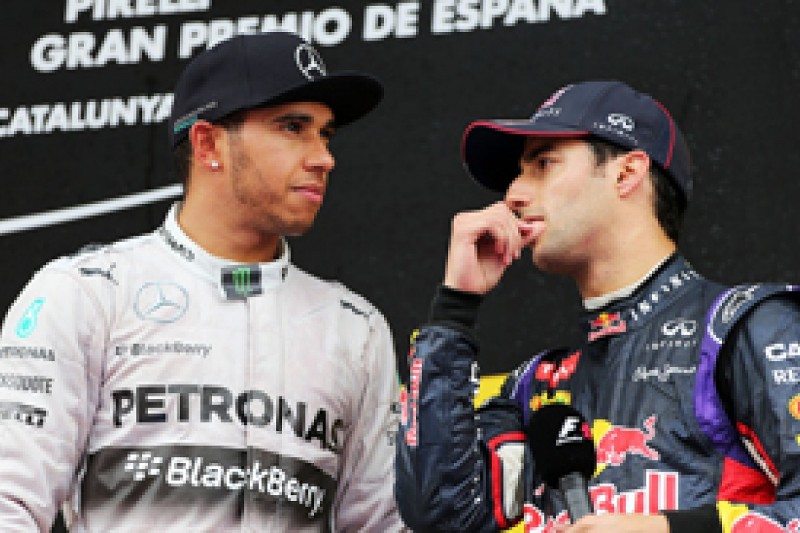 Daniel Ricciardo agrees that Red Bull has some work to do if it is to take the fight to Mercedes.

Ricciardo finished third in Spain - his first official podium finish after losing second in Australia to a post-race exclusion - although the young Australian was a full 49s behind race winner Lewis Hamilton.

"Unfortunately we are not going to catch Mercedes, at least this weekend, so a lonely third was not a bad result," Ricciardo said.

"Mercedes are the top dogs at the moment but we seem to be setting ourselves nicely in that next stop, so we now need to creep our way closer."