Six sets of Formula 1 team-mates, including Mercedes and Ferrari, have opted for different tyre allocations for next month's Italian Grand Prix

Mercedes' Lewis Hamilton and Ferrari's Sebastian Vettel have chosen five sets of softs, one more than their respective team-mates, and just one set of mediums.

Force India has selected three sets of the mediums - more than any other team - with Sergio Perez choosing an extra set of softs compared to Nico Hulkenberg.

At Haas, Romain Grosjean has selected one more set of the softs than his team-mate Esteban Gutierrez, but both have nine sets of super-softs - the most of any team.

Only the Red Bull, Toro Rosso, Sauber, McLaren and Manor drivers will start the weekend with the same allocations.

The super-soft tyre will be making its debut at Monza this year, with Mercedes, Ferrari, Williams, Renault, Toro Rosso, McLaren and Manor all choosing seven sets of the compound, one more than Red Bull and Sauber.

The soft and medium rubber was used in Italy in 2015, and both must be used again at some stage during this year's race.

Pirelli has nominated one set of the super-soft tyre to be used in the final part of qualifying.

Teams will be free to use the remaining 10 sets, making up 13 in total, as they wish during the weekend. 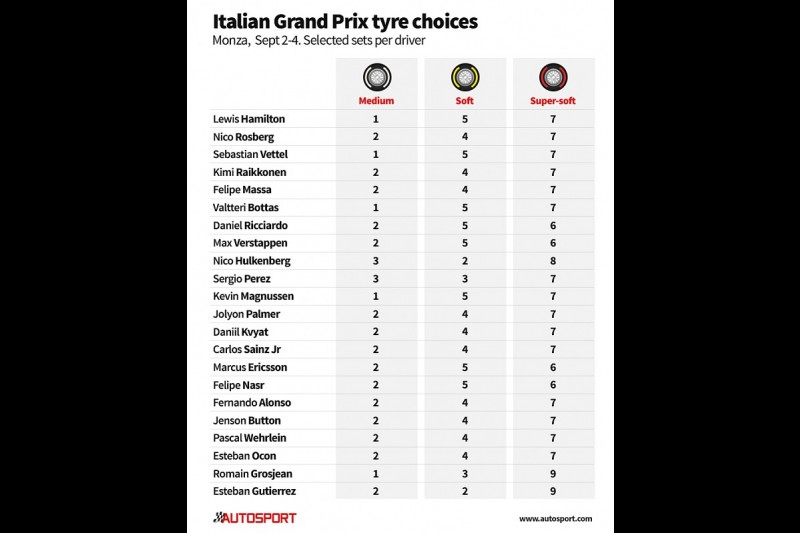 2016 Formula 1 title would mean more than others, Hamilton feels