Perez delivered his and Force India's first F1 podium since the same event in 2016, recovering from an opening-lap hit from Sergey Sirotkin to bring the car home in third behind Lewis Hamilton and Kimi Raikkonen.

He was then summoned to the stewards post-race, alongside fellow drivers Lance Stroll and Kevin Magnussen, over alleged improper use of DRS midway through the grand prix.

The system had malfunctioned during the race, with detection briefly rendered inactive at the first point and manual operation of the system permitted.

The stewards said the Perez had "incorrectly activated the system manually", but opted to take no further action, as the activations were brief and no car was overtaken.

"The stewards heard from Sergio Perez, the driver of car #11, and the team representative," an FIA statement read. "The stewards examined DRS activation data.

"It is apparent that the move to the 'default' setting if the DRS system malfunctions requires the team to convey to the driver, by radio, a series of steps to adjust various settings.

"In this case, the DRS light came on and as this was the first time the driver had experienced a default operation for the DRS, there was some misunderstanding of the procedure and the driver incorrectly activated the system manually.

"The system, however, was only activated twice, each time for a short distance before the driver and team recognised the error.

"The stewards are satisfied that no car was overtaken through this incorrect use."

Stroll, who finished the race in seventh to score Williams's first points of the campaign, and Magnussen, who ended up 13th, both likewise escaped penalties.

No action over Ocon/Raikkonen clash 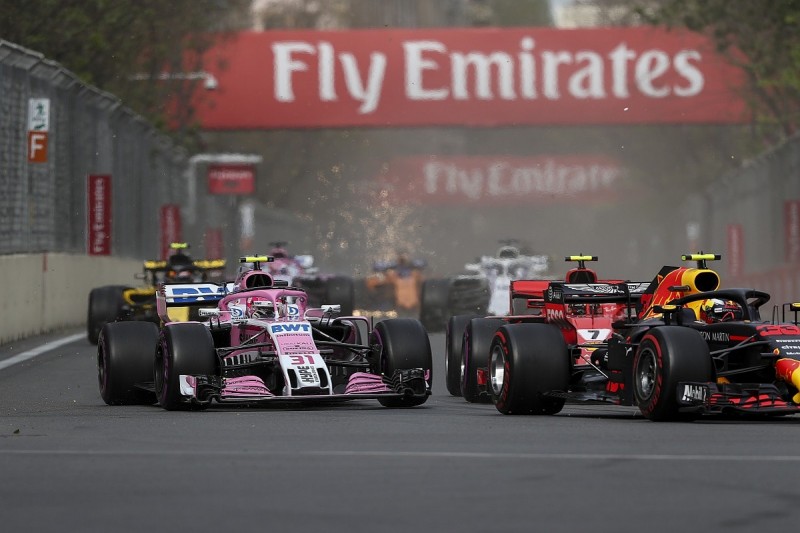 Ocon overtook Ferrari driver Raikkonen at the start of the race, but the Finn attempted to reclaim the spot into the Turn 3 left-hander.

As Ocon turned for the corner, the pair collided, sending the Force India into the outside wall and out of the race.

"The driver of car #7 [Raikkonen] and his team representative conceded that the collision was typical of a first lap racing incident," the stewards' statement read.

"The driver of car #31 [Ocon] stated that the last vision he had of car #7 was on the straight after Turn 2 which the two cars had successfully negotiated and that he had not seen car #7 on the inside into Turn 3.

"The driver of car #31 accepted the comments of the stewards that a driver should not assume another car is not in his proximity just because he cannot see one, as it is well known that vision from the current cars is not optimum in some positions."

Verstappen and Ricciardo reprimanded by FIA for Baku F1 crash