Vettel feels the incident needs to be reviewed, in particular given the way the TecPro barrier system worked compared to a similar nose-first accident involving Sainz's Toro Rosso team-mate Max Verstappen in Monaco this year.

"First of all it's important to know he is fine," said Vettel.

"But it was shocking to see he was so deep in the barriers, and he was covered by the barriers.

"If you look at the accident of Max in Monaco and compare that to Carlos's accident today, it was very different the way the barriers worked.

"That's something we need to understand because it took longer [to recover him] because of that.

"I don't know if there was anything wrong with the way they installed the barriers, or if it was just a coincidence with the way he crashed.

"But that's something that needs to be avoided."

Sainz tweeted a thumbs-up picture of himself from hospital after being given the all clear by doctors following numerous tests, and he said he hopes to be able to race on Sunday.

He is set to stay in hospital overnight, and it is now up to the FIA doctor to provide the final say on whether Sainz will be fit to take part in the race.

Vettel, however, feels Sainz would be wise to skip the event, adding: "It would be great to have him with us tomorrow, but after such a heavy impact I think you need to be patient.

"I remember Sergio Perez having an accident [in Monaco in 2011] and wanting to start the day after, but he couldn't even start the grand prix after that. It's wise to take the time."

In that instance Perez sustained concussion from a smash in Monaco, with different medical protocol applied around a driver that has sustained such an injury.

McLaren's Jenson Button, meanwhile, feels the fact Sainz ploughed through the TecPro barrier into metal Armco behind was of greater concern for him.

"You're always going to go under a barrier if you have a low nose on a racing car and the barriers aren't bolted to the ground," said Button.

"The problem was he didn't use the barrier to slow the car down because he went under it, so he hit the Armco, which is the bigger problem more than anything else.

"I don't really know what you can do in that situation, but there's always room for improvement with safety, cars, circuits.

"We've just got to make sure everyone keeps pushing and keeps improving." 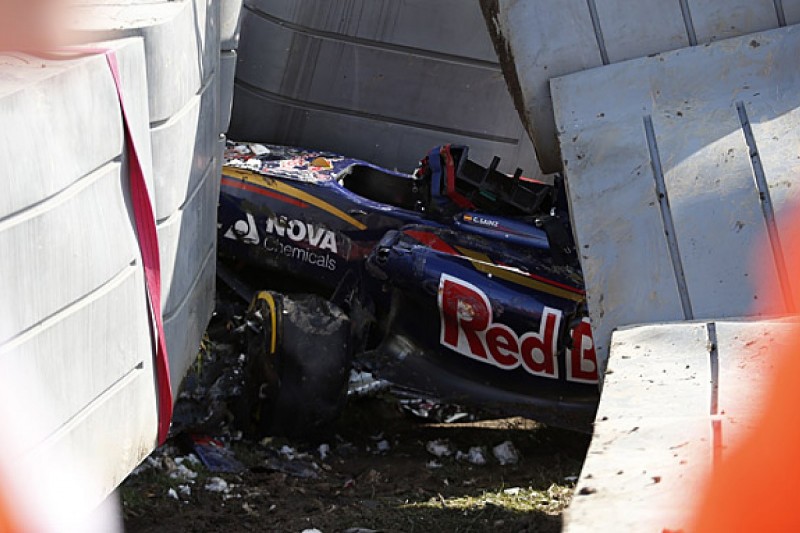