Sebastian Vettel says Ferrari had insufficient time to fix his broken Formula 1 car during Singapore Grand Prix qualifying, even had he pitted sooner for repairs

Vettel qualified slowest of the 22 F1 drivers at the Marina Bay circuit, after his Ferrari suffered a "rare" suspension failure in Q1.

He soldiered on in an attempt to make it through to Q2, but eventually retired the car to the pits.

Vettel said Ferrari realised it would have no time to fix the car after spotting the problem on his out-lap, so he had no choice but to press on regardless.

"Part of the rear suspension broke on the out-lap," explained Vettel, who suggested Ferrari may now fit his car with a fresh engine for the race, given any subsequent grid penalty would not affect him.

"It felt like the front and rear anti-roll bar broke, and I was going round on three wheels, which doesn't really work.

"Then the next lap from the garage side they understood they couldn't fix it.

"It was clear I wasn't going to improve significantly to save myself into Q2 to have another look and repair it, so that's why we decided to come in after the second lap.

"It is a rare failure. It broke, fortunately only on one car and not two.

"It's a big shame because I think the car was good enough to put on the front row.

"It felt better in the late evening than the afternoon sessions, so I had quite high confidence for qualifying, but couldn't really show that." 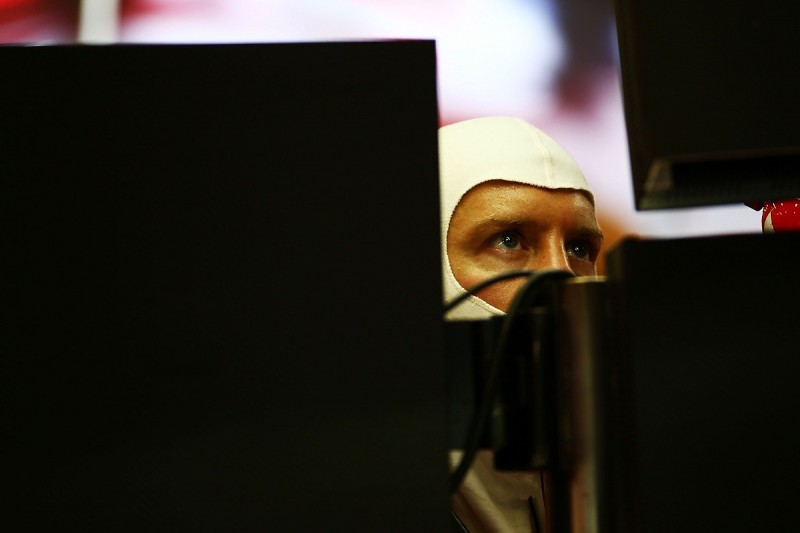 Vettel scored a dominant pole in Singapore last year and, though he predicted Mercedes would be favourite for this race this year, was surprised that Nico Rosberg was over half a second clear of Daniel Ricciardo's Red Bull.

"The gap to Mercedes is big, probably bigger than everyone expected, not just to us, but also to Red Bull," Vettel added.

"They should have put both cars on the front row, but Daniel did a very good job."

Team-mate Kimi Raikkonen was third fastest after the first runs in Q3, ahead of both Red Bulls, but slipped back to fifth when he failed to improve later.

"The car was behaving pretty decently, apart from lacking a bit of grip overall," he said.

"There are no major things we could have fixed to go faster, apart from adding grip overall.

"It was a good lap on the first run and then I had to try a bit too much to go faster and it didn't pay out."

Verstappen's Red Bull 'was driving me' in Singapore GP qualifying