The McLaren-Honda driver found the balance of the car more to his liking in qualifying after struggling in free practice and was on a lap that should have been good enough for the top 10 in Q2 when he grazed the wall with the left-rear wheel exiting the Turn 14 right-hander.

The resulting damage to the wheel caused a puncture, meaning Button was unable to improve on his 13th place and match team-mate Fernando Alonso's ninth on the grid.

"So many people have hit the wall here this weekend and no issues, then I hit the wall and I get a puncture," said Button, who claimed he was only half-a-tenth behind Alonso's lap time when he went off.

"It was a tiny tap, but I pushed the boundaries and thought I could get away with it, and I couldn't.

"All weekend, I struggled massively with the car, but in qualifying it definitely came to me and the pace was good compared to Fernando.

"It would have been a pretty easy Q3, but you have to get round the lap and I didn't." 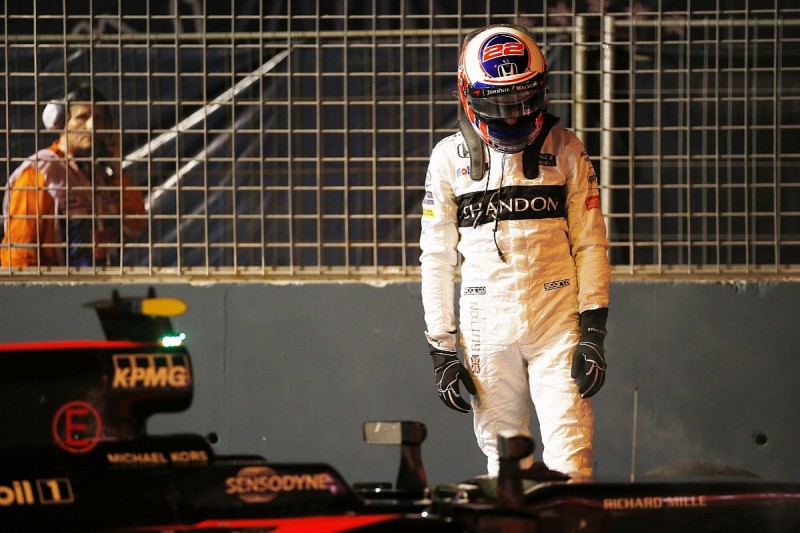 McLaren had set its sights on being the fourth strongest team for the rest of the season, but Alonso was not disappointed despite ending up behind Toro Rosso drivers Carlos Sainz Jr and Daniil Kvyat as well as Mercedes, Red Bull, Ferrari and Nico Hulkenberg's Force India.

He did admit to being surprised to be behind the ex-Minardi squad.

"We are more or less in that position, it's just Toro Rosso is surprisingly good here," said Alonso when asked why McLaren was not the fourth strongest team in qualifying.

"They have a car that is good for the street tracks with a lot of downforce, a lot of drag but we know after this track we should be in front of them regularly.

"We are still aiming to be the fourth quickest team for the rest of the season, and hopefully tomorrow we will finish in front of them."

Button also expressed concern about the race pace of Toro Rosso and Force India, but expects the picture to change a little but as the track continues to rubber in.

"The Toro Rosso and the Force India have been very strong on long-run pace, but it seems when the circuit grips up we definitely find better pace," said Button.