Verstappen's Red Bull 'was driving me' in Singapore GP qualifying

Max Verstappen felt like his Red Bull Formula 1 car "was driving me" during Singapore Grand Prix qualifying, as hopes of challenging Mercedes for pole evaporated

Verstappen lapped within a tenth of Nico Rosberg in final practice, but could get nowhere near when it counted in qualifying, ending up almost eight tenths slower than the pole position time in Q3 at the Marina Bay F1 circuit.

Verstappen explained that he had difficulty getting the ultra-soft tyres on his Red Bull to work properly over the first sector of the lap.

"I just couldn't get the front tyres to work in the first sector and it just snowballs," he said.

"You can't get them ready, you don't feel comfortable, you start locking tyres, and then sector two and three you're not getting the most out of it because in sector one you're killing the understeer by going on the throttle, but that kills your rear tyres.

"The whole weekend I've been happy, and then the moment it had to be done I was not happy.

"You don't feel comfortable and then you can't take the risk you usually take because you're just fighting the car.

"I think today the car was driving me because I couldn't feel it like I wanted to.

"It was not a fantastic qualifying." 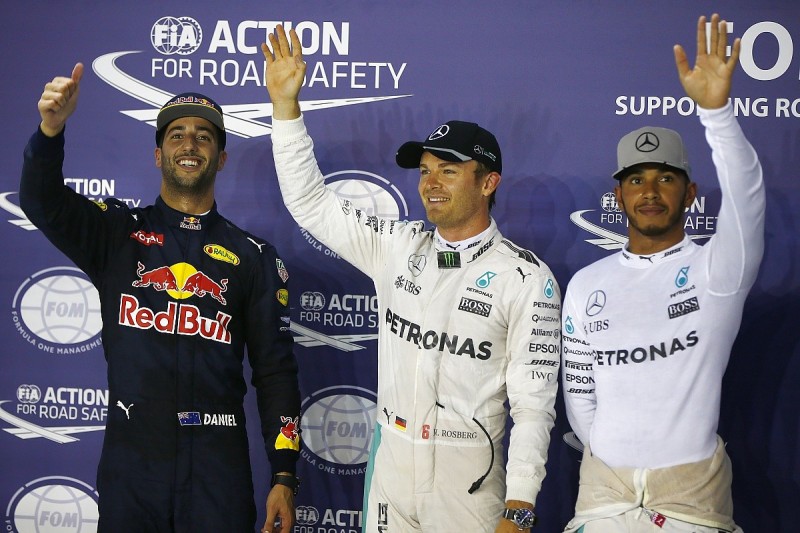 Both Red Bulls will start on an alternate tyre strategy to Mercedes, after passing through Q2 on the super-soft tyre, and Ricciardo hopes it will pay dividends by allowing him to complete a longer first stint than Rosberg and Hamilton.

"We expected other teams to do it as well," he said. "We were a bit surprised we were the only ones.

"It was always the plan. It's a bit like Monaco. We did that thinking it would be the right thing but we didn't get a chance to see it with the wet start.

"Tomorrow I think it's going to be dry, so we'll get a chance to see if it works."

Ricciardo was quickest by an impressive margin in Q1, but said he always knew it would be difficult to beat Mercedes in qualifying.

"I'm pleased enough, the aim was to try and be on the front row," he said.

"We knew it would be hard to try and get in front of Mercedes, but it was nice to at least get one.

"I would love to win it - we've created an opportunity starting on the front row.

"If we get a good start and if we get track position we can control the race.

"There will be some curveballs with safety cars and whatnot, but at least we're at the pointy end.

"Hopefully we can stay out of trouble and get that victory."