The Ferrari driver went on to claim pole position at Montreal on Saturday, and he progressed from Q2 with the ultrasoft tyre, meaning he avoids having to start the race on the more fragile hypersoft.

However, he wanted to get a feel for the softest tyre before the decisive Q3 session, but had to abandon the lap when he caught a train of four slow cars on the long straight before the final chicane.

Vettel called the incident "ridiculous" on the radio at the time, and questioned what the drivers involved - Valtteri Bottas, Nico Hulkenberg, Carlos Sainz Jr and Kevin Magnussen - were doing.

"I wanted to get a feel [for the hypersoft] and see where we end up," he said after the session.

"Obviously they were all trying to get a slot for their flying lap, but I was coming at full speed and I had to abort.

"There was no chance to go slalom around them. It was a bit surprising, there was no way for me to carry on." 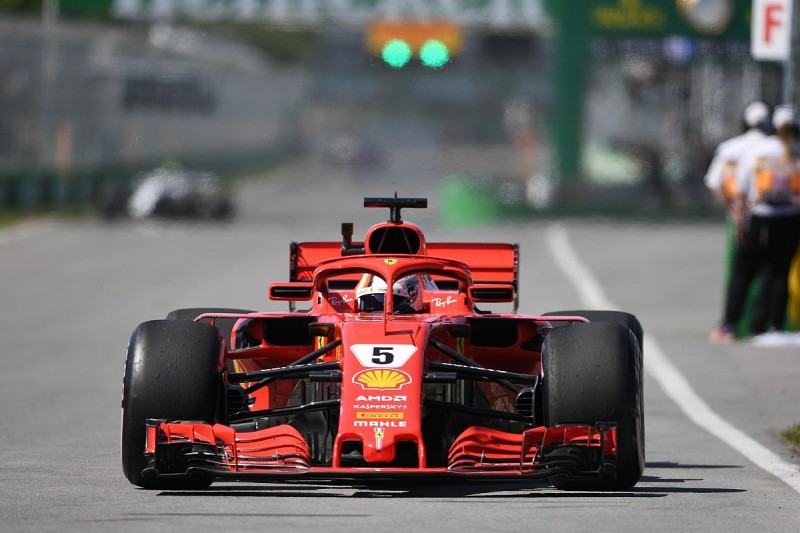 Magnussen said the other drivers did their best to stay out of Vettel's way.

"I was pretty surprised as well," he said of the incident.

"He was on a flying lap, so we all tried to get out of his way.

"But you are also trying to stay out of the other cars' way, and trying not to have an accident, while looking in your mirrors.

"It's not an easy situation.

"What are you going to do? I don't think there's much.

"That situation was a bit unlucky - we were all bunched up.

"Because people tried to stay out of his way they all braked, and went really slow in a fast bit of the track to let him past.

"I arrived there and saw three cars stopped on the track so I then looked in my mirror and saw him not far away so I did the same.

"We all did that, four cars trying to let him past.

"It was pretty messy, but I don't know what you're going to do about it."

Haas team boss Gunther Steiner said situations like that are "impossible" to manage from the pit wall.

"A situation like this for Vettel when he is coming up fast - in the end he still got pole, so no harm, no foul, which was good," he said.

"But we cannot manage it.

"We don't know what the other cars are doing, so we cannot tell our driver 'go right, go left'.

"Everybody else moves out of the way, Kevin knew he was coming, he was out of the racing line, but we are not playing games between teams."