After a difficult 2017 with a tricky car and year-old Ferrari engine, Sauber is expecting a stronger grand prix season after overhauling its aerodynamic philosophy and marrying that to a latest-spec power unit.

It has adopted some radical solutions in areas of its C37, and here Giorgio Piola and Matt Somerfield look at how Sauber is pushing the limits of the rules in its bid to make steps up the grid.

One of novel solutions on the C37 is the use of winglets on the already raised upper front wishbone.

The raised wishbone strategy was adopted simultaneously by Mercedes and Toro Rosso last season and helps the airflow find a clearer path to the sidepods and floor behind.

Sauber has utilised the upper elements of this wishbone idea by fitting vertical winglets to help further align the airflow passing through.

This also helps limit the turbulence shed from the tyre alongside and the damage that could cause downstream.

The winglets fall into a grey area of the regulations, with the outer 125mm of the wishbone shroud classified as part of the brake duct rather than as part of the suspension.

This is the first time such winglets have been used so aggressively in F1 on the top surface of the wishbone, but it is not the first time teams have played around in this area.

Back in 2016, Toro Rosso featured a winglet that was hung from the lower wishbone, but this was nowhere near as complex as what Sauber has done. 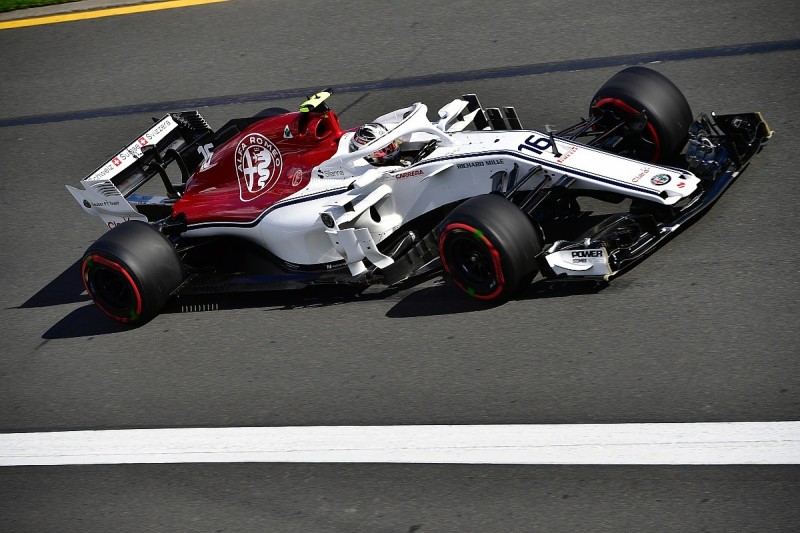 Sauber has also made a lot of effort with its engine packaging, and is treading its own path when it comes to the sidepod solution too.

Rather than adopt the low-slung side impact spar pioneered by Ferrari and copied by several others, it has created multiple inlets above and below the spar which changes the car's aerodynamic profile instead.

Charles Leclerc finished 13th in the season-opening Australian Grand Prix, beating Lance Stroll's Williams, and though team-mate Marcus Ericsson retired the Swede had only narrowly missed out on a Q2 slot on Saturday.

Sauber technical director Jorg Zander told Autosport that the team's target was now to avoiding having "individual elements that all provide some performance, but are not linked to each other well enough in order to extract more out of it".

"We've got a lot of good features on the car and they do work and provide a certain potential performance," he said.

"What we need to get sorted is all these features being harmonised on a better level.

"It's more to do with an improvement of the overall concept. We simply didn't have enough time to make sure this is all harmonised.

"I believe if we get this done we can unlock more potential."