On Saturday, Norris had qualified fifth, which became fourth on the grid when Ferrari's polesitter Charles Leclerc failed to make the start.

Norris chased after the remaining Ferrari of Carlos Sainz Jr in the first stint, but then started to fade in the second stint on hard tyres.

Due to Valtteri Bottas retiring following a Mercedes pitstop mishap, Norris' fourth position became third, with the young Briton defending his second podium of the year against the chasing Perez in the final laps.

In a processional Monaco race, overtaking proved impossible but, until the chequered flag, Norris still had to soak up plenty of pressure from the Mexican - who was on fresher tyres.

"It's a cool feeling," Norris said. "You don't know how cool it is until you're actually there, it's incredible.

"It's a fricking long race, especially with Perez the last few laps.

"I know you can defend relatively easily in Monaco but there's still just that pressure and seeing him in my mirrors every time I go round the corner is just a bit stressful.

"We were there, you know, I was keeping up in the first stint. The second stint we struggled a bit more on the harder tyre but we had good pace all weekend and it's paid off today."

Norris said he was confident of keeping the quicker Red Bull of Perez at bay if he managed to get a good exit from the corners leading onto Monaco's short straights but said managing his tyres and fuel made "life a lot more tricky" behind the wheel.

"I think the Red Bull is a bit quicker than us, they were blatantly faster," Norris added.

"But it's a track you can defend relatively easily on, as long as you've got them covered into Turn 1 and Turn 10, then you're in good shape, so as long as I didn't make any mistakes there then I knew I'd be in with a good shot.

"It was more just managing a couple of things like the fuel, the tyres, things like that which made my life a lot more tricky than ideal, but it's the way it is. It's the way races go sometimes, but it paid off so I'm not complaining." 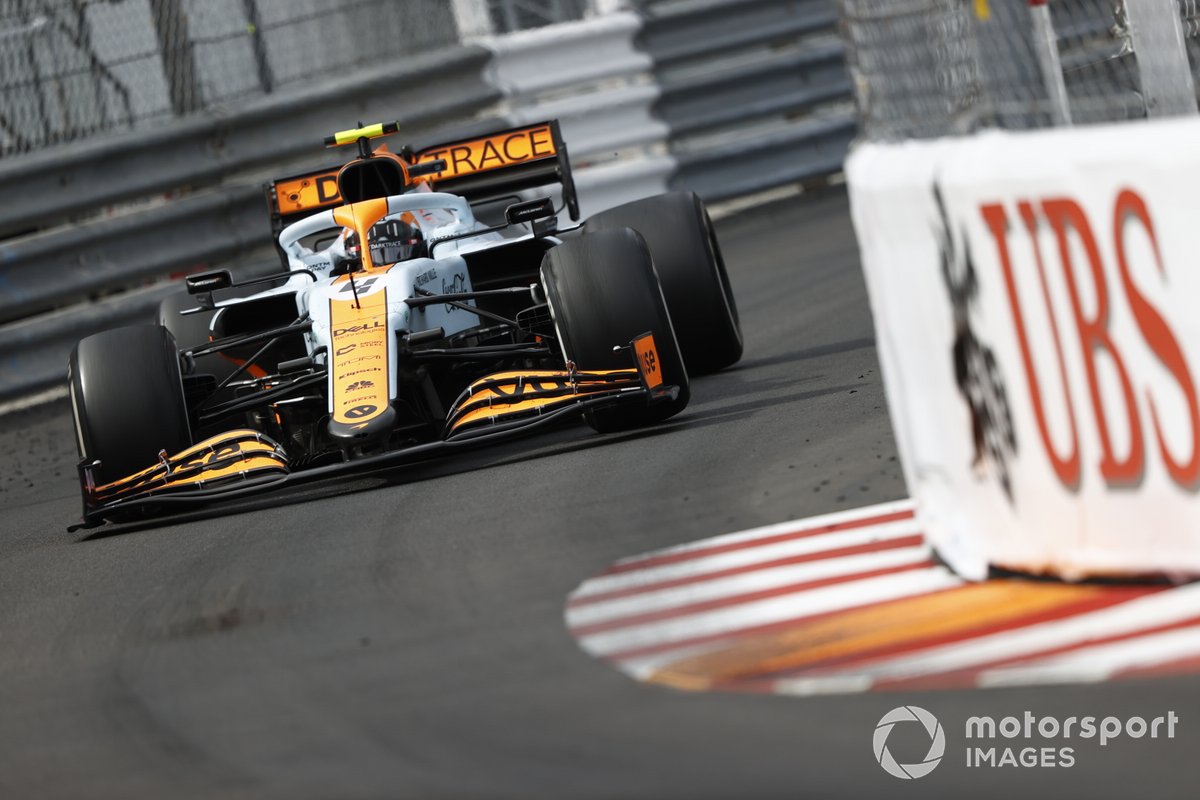 Norris, who is one of F1's standout performers in 2021 with two podiums, leaves Monaco third in the championship after leapfrogging the unfortunate Bottas.

But the 21-year-old downplayed his lofty championship position as a "bonus" and preferred to focus on the fact that the Woking outfit's efforts to catch up to F1's top teams are starting to pay off.

"I'm not thinking of the championship, that's like an added bonus for now," he explained.

"Moments like today, Imola, the biggest thing is seeing the team, how happy they are, their hard work paying off.

"It's our final year to really make that next step and really get on the same foot as Red Bull and Mercedes and Ferrari, and days like today prove that.

"But also it's very motivating for the team to make sure, like yesterday two tenths off pole, if we make the car that little bit better we can be even stronger.

"So, it's awesome. Big thanks to them and we'll try to keep it up."