Rosberg failed to hook a decent lap together during free practice for the Mexico City F1 race, and found himself down in fourth and behind both Red Bulls after the first runs in Q3.

He bounced back on his final run to join Mercedes team-mate Hamilton on the front row, but was still 0.254 seconds behind the reigning champion's best effort.

"Lewis's lap was brilliant, not so much mine," Rosberg said.

"I put it together when it counted at the end, so I'm relatively pleased with that, to make sure I'm on the front row.

"It's not pole, of course, but it still gives me a great chance for tomorrow."

Rosberg said colder than expected temperatures at the Hermanos Rodriguez circuit made the car difficult to drive, and made it harder for him to get comfortable in the build-up to Q3.

"It's taken me a bit longer this weekend to find a way, with tyre temperatures being on the cold side all weekend, but I got there in the end," Rosberg added.

"I'm feeling optimistic. As we've seen this year pole is not everything on Sundays, so I'm sure there will opportunities to try and get that win."

Hamilton qualified well clear of the field, but was not happy with his performance in the final segment of the session.

"Q3 was actually the worst session of whole weekend so far," Hamilton said. 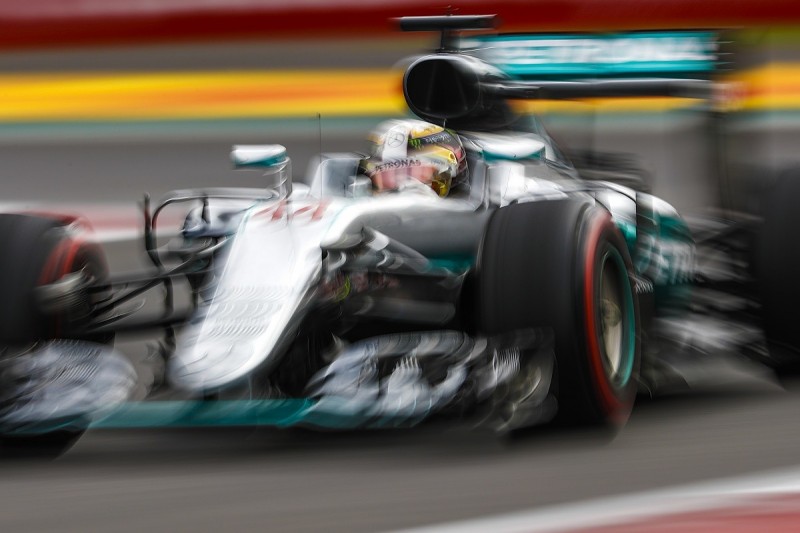 "But I know going into tomorrow we've the right strategy, and the car in a good place for long runs.

"It's always a tough battle when you're trying to pull out perfect laps, and when it counts is always a difficult thing, particularly with these tyres.

"But at least there was a bit more grip on the track. It felt more like a racetrack [than earlier in the weekend], which is great."

Both Red Bulls improved on their final runs in Q3, but not by enough to deny Mercedes a front row lockout.

"Generally qualifying felt good, I had a good feeling with the car, and it was getting better and better," he said.

"It's just a shame in Q3 I couldn't get a lap together - P2 was definitely possible, but we're not too far behind, and we're on a different strategy for tomorrow as well, so it will be interesting."

Verstappen and team-mate Daniel Ricciardo will start the race on the super-soft tyre, putting them on an alternative strategy to the Mercedes drivers.

"There's more degradation than the soft, so it's up to me to make it last as long as we can," Verstappen added.

"With such a long run to the first corner, if you get a good start, there will be opportunities from there onwards."