Hamilton did a time good enough for pole position on his first run in the Q3 top 10-shootout and was unable to improve on his second attempt.

But Rosberg had the most to do on his second runs, as he was initially only fourth fastest, behind Hamilton and Red Bull drivers Max Verstappen and Daniel Ricciardo.

With all drivers using super-softs during Q3, Verstappen and Ricciardo were only able to make tiny improvements on their second runs in an attempt to consolidate second and third places.

Rosberg, who has had a tough weekend, managed to do enough on his final run to jump to second, one tenth faster than Verstappen.

Nobody was able to challenge Verstappen and Ricciardo for second-row slots, with Force India driver Nico Hulkenberg's first run in Q3 good enough for fifth place.

Ferrari had a disappointing session, with Kimi Raikkonen unable to improve on his first run time and ending up sixth and Sebastian Vettel moving from eighth to seventh on his last run as the team struggled to find grip with an increase in track temperature near the end. 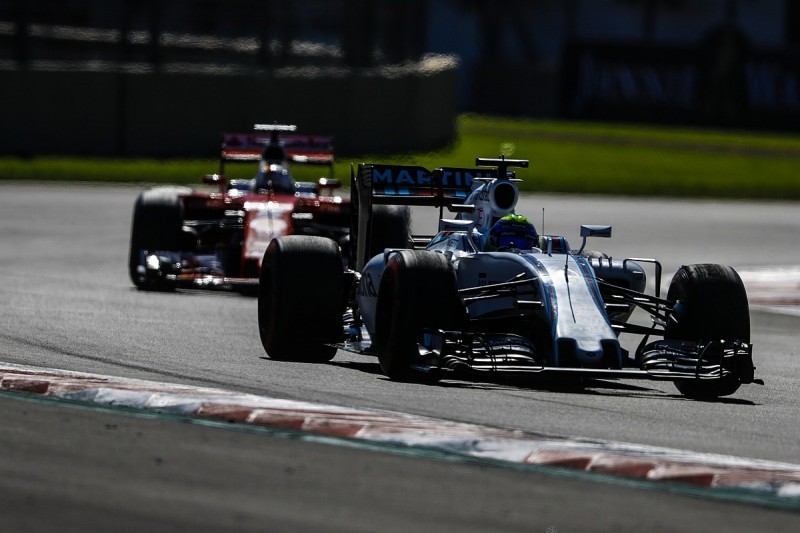 The two Mercedes drivers, as well as the two Ferrari drivers, will start the race on the soft-compound Pirellis having set their fastest times in Q2 using the slower rubber.

Raikkonen did go out on super-softs in Q2, but did not improve on his soft time.

McLaren driver Fernando Alonso missed out on a place in Q3 by 0.113s seconds to Sainz, and will start 11th.

Home hero Sergio Perez was unable to improve his laptime on his second run using super-softs, having set a time ultimately good enough for 12th using the softs.

Wehrlein had earlier put in a stellar last lap on a third run in Q1 to reach Q2.

Haas driver Esteban Gutierrez was fastest of those eliminated in Q1 having spun in the Esses while trying to improve on his final flying lap.

Although he held 16th place at the time, Wehrlein's late effort then bumped him down to 18th place.

Toro Rosso driver Daniil Kvyat was only able to complete one four-lap run, reporting a total loss of power and returning to the pits and not running again thanks to an electrical problem.

Felipe Nasr was 19th ahead of the Manor of Esteban Ocon, while Romain Grosjean in the second Haas had a trouble session.

Grosjean was unable to post a laptime on his first run after locking up and going off at Turn 12, before being called back into the pits because he didn't have enough fuel to do another run.

Although he did set a time during a seven-lap run on his second set of super-softs, he was unable to threaten the top 16 and lost time on his final attempt when Gutierrez spun in front of him.

Jolyon Palmer was unable to participate in qualifying after suffering chassis damage from clouting a kerb during Saturday morning practice.