Ferrari set the pace in practice on Friday, but it failed to carry that into Saturday, with Kimi Raikkonen one place ahead of Vettel in sixth for the Mexico City F1 race.

Vettel lamented Ferrari's pace on the super-soft, having been third quickest in Q2 on the softs.

"I found more grip with the soft than the super-soft, which is pretty unnatural, so it's something we need to look into," said Vettel.

"This morning I struggled on the super-soft, and yesterday wasn't the case.

"Something happened in terms of conditions, but it should have been fine, if anything better this afternoon with the hotter track.

"The car was good enough to put it potentially in second, or at least on the second row, but we didn't do it."

Vettel remained positive about Ferrari's chances in Sunday's race, particularly as both he and Raikkonen are starting on the soft like the Mercedes pairing with the Red Bulls and Nico Hulkenberg ahead of him on the supersofts.

"It could be interesting," he said. "One lap is very different to doing a lot of laps in the race.

"We tried it [the soft], it worked for both of us, so that's positive, so it should suit us in terms of the race pace, and finding the right strategy I hope." 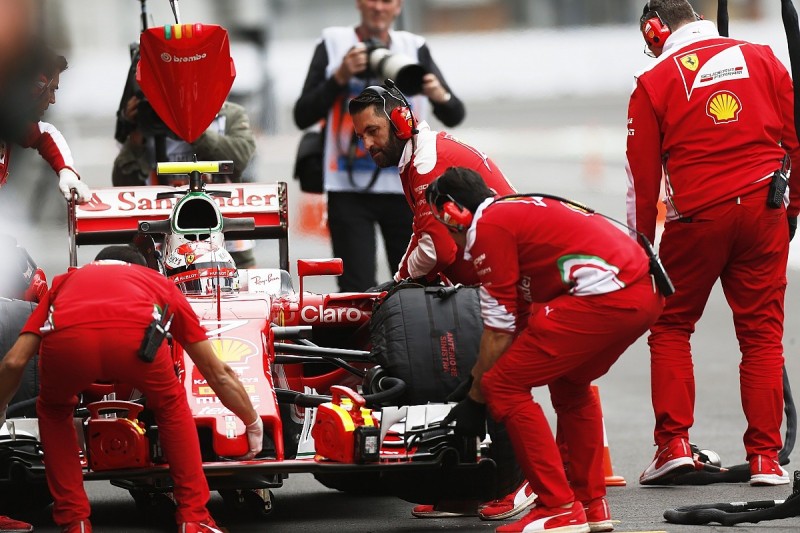 Raikkonen said the car improved for Saturday, but he was also confused by how the tyres performed and cited an engine problem for ruining his final run in Q3.

"I felt my car was definitely better today," he said.

"It was more to do with getting the tyres working as you want because it seems to be quite tricky.

"One lap, you make them work easily, like in Q1, then we had a struggle in Q2 and it seemed to come back in the last qualifying.

"In the last qualifying, the first lap was decent but I felt I lost time in a few places and then there was something a bit odd feeling in the last part.

"We had some issue with power on the last set of tyres so I feel there was a lot of lap time that we never got to use. The team is looking into it.

"After a little struggle in Q2, I took it a bit easy in the first run in the last part of qualifying first run so the position we are is not showing where the lap time was from our side.

"It's just unfortunate what happened."