Sebastian Vettel believes Max Verstappen is still "a bit jumpy" when defending his position in Formula 1, following their wheel-to-wheel battle in the British Grand Prix

Verstappen's defensive driving has come under fire in the past, with F1's rules previously being tweaked to clarify what drivers are allowed to do to hold onto their position, particularly in braking zones.

Vettel and Verstappen briefly fought a fierce battle for third place at Silverstone in the first stint of the race, each going off track once through Stowe and Club, with Vettel suggesting on the radio that he felt Verstappen moved in the braking zone for the latter.

"It's not right to say I expected it, but we know he is a bit jumpy on that," said Vettel when asked by Autosport about that message.

"He is trying to defend as hard as possible, but at some point you need to stick to your line.

"I'm sure he will calm down, it's still not that many races he has done."

When asked if he felt Verstappen overstepped the mark, Vettel added: "No, not really, but you can argue on that - what did it bring him?

"The fact that I ran out of tyres and it blows up, that's something nobody could've seen.

"It was clear we were faster, we got him in the pitstop.

"We weren't fighting anybody else so it's fine. He has calmed down a lot already, so it's normal." 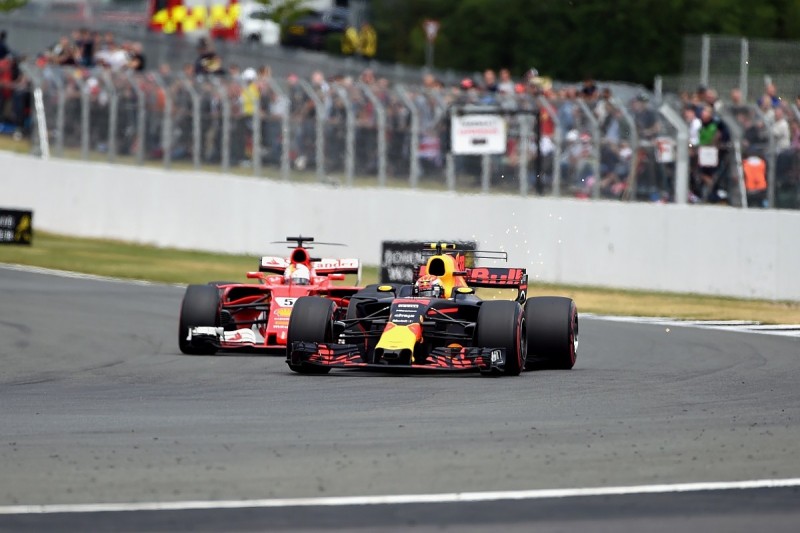 Vettel also had a close fight with Valtteri Bottas through Stowe, but he said he had no problem with the Mercedes driver.

"In Stowe I had something similar [twice], I was on the inside - once trying to attack Max and then trying to defend from Valtteri," he said.

"It looks like the track can be very wide there!

"In the end [the battle with Bottas] didn't make or break our race.

"I probably didn't get too lucky twice there, but it was fine. I didn't have a problem with what he was doing."