A hard week for Lotus was alleviated on Sunday when Romain Grosjean finished third in the Belgian Grand Prix, claiming the team's first podium for almost two years.

Behind the scenes, however, chief executive Matthew Carter and deputy team principal Federico Gastaldi have been forced to deal with legal matters related to the issue surrounding Pic.

Pic recently opted to take Lotus to court, claiming the team failed to honour its contract with him last season with regard to the number of days he should have been behind the wheel in his reserve role.

That matter is currently being dealt with by an arbitration court, but in a bid to expedite matters Pic managed to acquire an attachment order from a Belgian court on Thursday preventing the team's cars and equipment from leaving the circuit.

Although progress has been made over the past few days by lawyers representing both parties, a resolution is not due until Monday.

The issue, however, failed to detract from the team's joy at securing a first podium since the 2013 United States GP.

Grosjean's cause was aided by a tyre blowout for Sebastian Vettel on the penultimate lap as the Frenchman closed on the Ferrari.

"I still can't believe we are on the podium," said Grosjean, who admitted to "crying on the last lap" such was his joy and relief.

"It's very unfortunate he had that puncture and it was a bit of a scary moment just being behind.

"But this is probably one of my best races ever.

"Being on the podium now, with how we are during the weekend, shows how strong our guys are, how strong we're capable of building a car."

Highlighting the difficulties for Lotus, trackside director of operations Alan Permane said: "This is the worst season we've had financially, no doubt.

"We've had to scrimp and scrape for parts, and to get the parts on the track is a massive effort each week, so to be on the podium is unbelievable for everyone here and back at Enstone.

"I know it's the party line, but it really will make a big difference to us.

"If you'd have asked me at 2pm whether we would be on the podium I would have said no, so a little bit surprised there.

"But Ferrari allowed us to get close to them because of their all-or-nothing strategy, if you like, and Williams were a little bit slower than I imagined.

"Romain was faultless, he was brilliant. If you look back at his performances in 2013 he did this race-in, race-out, so this is Romain." 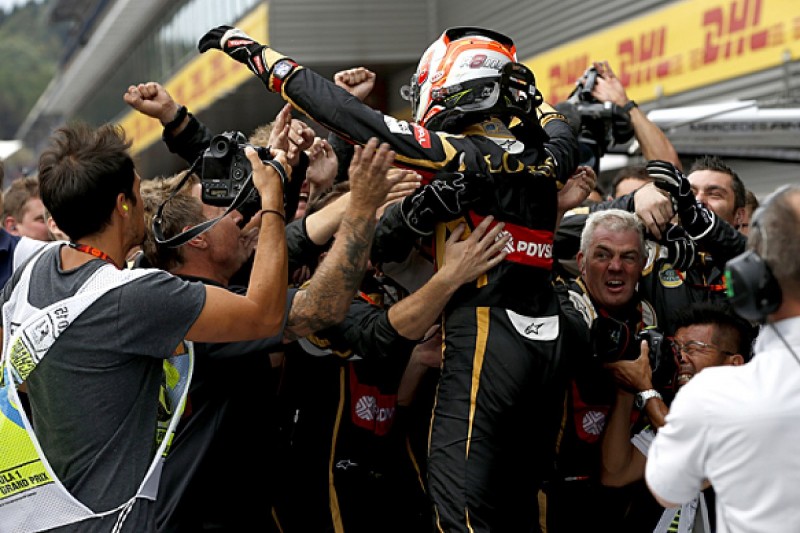