The reigning world champion, who has won four times at Austin to add to his 2007 US GP success at Indianapolis, finished 4.5s ahead of Mercedes team-mate Rosberg, with Red Bull's Daniel Ricciardo third.

Rosberg's championship lead has been cut to 26 points over Hamilton, but it could have been more as Ricciardo and team-mate Max Verstappen had a shot at upsetting the Mercedes one-two.

Hamilton and Rosberg made clean starts, although Ricciardo took advantage of the wide first corner to get alongside Rosberg, ultimately completing the pass around the outside through Turn 2. 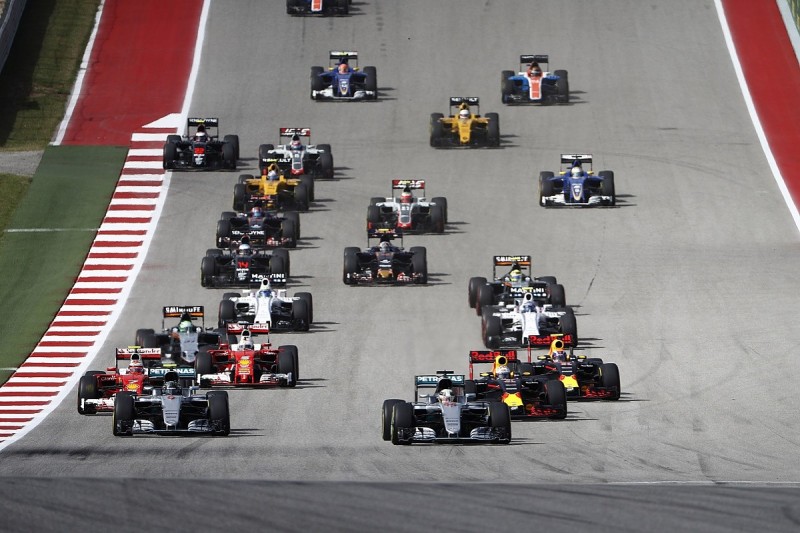 Verstappen, who passed Kimi Raikkonen on lap 12 to claim fourth, then began to push Rosberg who found himself sandwiched between the Red Bull duo.

But Verstappen's race unravelled from lap 26 when he mistakenly thought he had been called into the pits, with his crew not ready when he arrived.

Three laps later Verstappen suffered a gearbox failure, and he tried to get his car back to the pits rather than stopping trackside.

When he eventually parked up, the virtual safety car was deployed, which gave Mercedes pair Hamilton and Rosberg what Ricciardo described as "a free stop".

Having stopped for a second time on lap 25, before the VSC, Ricciardo therefore found himself third, losing what Red Bull estimated to be 10 seconds to Rosberg thanks to the VSC.

From that point on the top three positions were sealed, with Ricciardo safe in third as Raikkonen was on a three-stop strategy and had another stop to make.

Raikkonen's third stop led to the end of his race though, as he pulled away too quickly, with the right-rear tyre gun yanked off in the process.

As Raikkonen began to climb up the hill out of the pitlane he was forced to pull over after being told to stop, from where he rolled his car back down the slope and out of harm's way.

Raikkonen was the fourth retirement of the race, with Force India's Nico Hulkenberg first out after a Turn 1 collision with Valtteri Bottas in his Williams, sustaining trackrod damage with his car unable to turn left.

Bottas suffered a right-rear puncture that dropped him to the back of the field, and after an early pitstop he could only manage 16th at the end.

Along with Verstappen, Esteban Gutierrez was the other retiree after 18 laps with what appeared to be a brake problem that led to him going off at Turn 11.

Behind the leading trio, Vettel salvaged fourth for Ferrari, with Fernando Alonso fifth for McLaren after passing Toro Rosso's Carlos Sainz Jr on the penultimate lap of the 56.

Alonso, though, is under investigation for an incident with Williams's Felipe Massa on lap 54 that led to a front-left puncture for the Brazilian, who managed to hang on to seventh ahead of Sergio Perez.

The Mexican suffered a lap one spin after being hit in the rear by Daniil Kvyat, which led to a 10-second time penalty for the Russian who finished 12th.

Jenson Button and Romain Grosjean were ninth and 10th, the latter claiming a point for Haas at the team's maiden home race.

United States GP: How the grid will line up for the race