If Hamilton wins at Yas Marina on Sunday, he needs Rosberg to finish fourth or lower to overturn the German's 12-point lead in the standings and win a fourth world championship.

Horner, whose Red Bull team is likely to be Mercedes' closest challenger, understands that means Hamilton needs drivers such as Max Verstappen and Daniel Ricciardo to get ahead of Rosberg.

"First of all to my drivers I'd say just go for it because it's not our championship battle," Horner told reporters at a Red Bull media event on Wednesday.

"We could be Lewis's best friend on Sunday if we manage to get both cars ahead of Nico.

"There's no point Lewis being ahead by half a lap - if he's smart he's going to back the cars up so there is racing behind him because that's the only way the result will fall his way.

"Nico has got everything to lose.

"In reality a top three finish is a straightforward result for a Mercedes driver but he's probably going to be watching his mirrors harder than everybody else in the field. He's got everything at stake.

"Lewis's job in some ways is easier as Nico is the one with the pressure on him to close out the championship."

Ricciardo reckons trying to hold Rosberg back might compromise Hamilton too.

"I'm sure he wants us to get up there but I think he should still focus on his race, because if he starts playing around, then we might beat him as well," he said.

Horner believes the way Sebastian Vettel snatched the title from Fernando Alonso and Mark Webber in 2010 is an example of how the focus on securing a championship can upset title contenders' rhythm.

"That was very much the scenario with Sebastian in 2010 - he paid no attention to what was going on around him, just got on with the job and drove a great race. 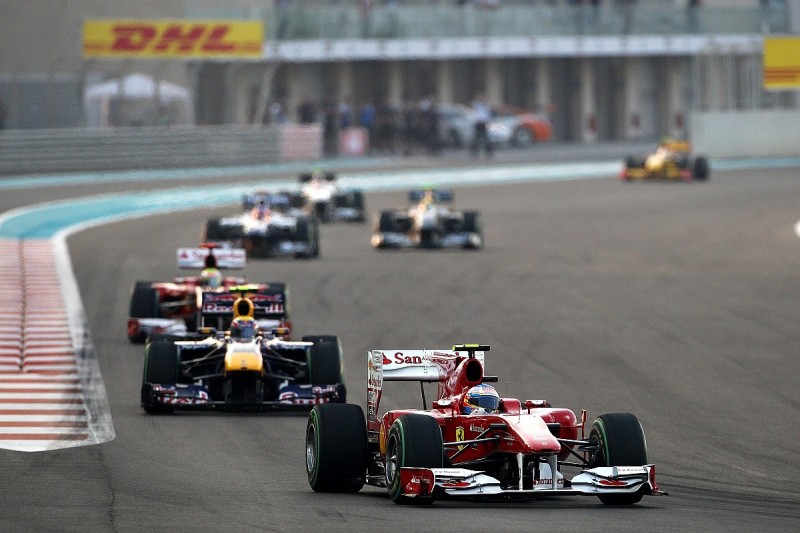 "The others tightened up a bit, particularly Fernando focusing on what Mark was doing and forgetting what Seb was doing.

"[Alonso] went into that race similar to Nico just needing to finish in the top three to be world champion.

"Lewis still has a pretty decent chance going into this final race."

"You think about Rosberg's position - all he has to do is finish third," said Ricciardo.

"Even if he drops back to fifth at the start, the car is still quick enough that he could get through during the race.

"If he's a bit cautious, I'll try to take some advantage.

"They're normally too fast, but if they're a bit more vulnerable this weekend it's better for us."