Japanese Grand Prix: Bottas fastest in FP3 before crashing out

Valtteri Bottas edged out Mercedes Formula 1 team-mate Lewis Hamilton to set the pace in final practice for the Japanese Grand Prix, but crashed to end his session early

The Finn clocked a 1m29.055s on the soft tyres to finish 0.014s clear of Hamilton, with Ferrari's Sebastian Vettel three tenths off the pace in third place using the super-soft Pirellis.

It was frustrating session for both Mercedes and Ferrari, with Bottas and Kimi Raikkonen crashing and Vettel the only one of the quartet to get a representative lap on the super-softs.

The rain stayed away during the session, allowing the field to head out on the slicks from the off and set about making up for running lost in yesterday's rain-hit second practice session.

Bottas set the early pace on the soft tyre, a fraction ahead of Mercedes Hamilton, who was running the same rubber.

Red Bull's Max Verstappen was third on the soft, 1.334s adrift, with team-mate Daniel Ricciardo four tenths further back on the super-softs in fourth.

The session was then red-flagged shortly before the halfway mark when Bottas ran wide of out Spoon, pulling up the artifical grass at the exit of the corner.

The Mercedes driver clipped the wall a couple of times, damaging the right-rear corner of the car. Although he made it back to the pits, that was the end of his session. 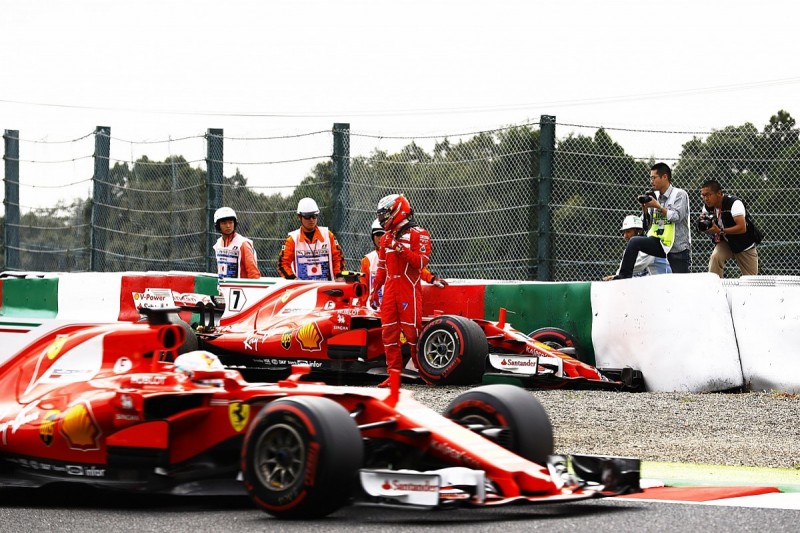 Running got back under way just after the halfway point but lasted just three minutes before race control red-flagged it again following Raikkonen's crash at Degner 2.

Replays showed the rear of his Ferrari got away from him mid-corner and Raikkonen couldn't gather it up before he hit the barriers, damaging the left side of the car.

The marshals quickly craned his damaged Ferrari over the barriers, allowing the session to get going again.

Several drivers, including Lewis Hamilton, had their super-soft qualifying-simulations ruined by the two red-flag interruptions.

Vettel focused on race simulations early in the session, before turning his attention to the super-softs and low fuel.

His first effort put him third and although he improved next time around, he was still 0.324s adrift of the lead Mercedes.

Verstappen's super-soft tyre run put him fourth, 0.855s off the pace and one tenth clear of Ricciardo in fifth.

Esteban Ocon was best-of-the-rest in sixth, just over a second adrift of Bottas, with Nico Hulkenberg the leading Renault in seventh.

Fernando Alonso, who has a 35-place grid penalty for engine component changes ahead of FP3, was eighth as Sergio Perez ended up ninth.

Jolyon Palmer made it two Renaults in the top 10, but he will start Sunday's race towards the back after engine component changes handed him a 20-place grid drop.

Raikkonen ended up bottom of the timesheets, having focused on race simulations on older sets of super-softs before crashing on his first flier on a fresh set.