Once the 2020 Formula 2 season eventually gets started in Austria, one Formula 1 junior will face the most important campaign of their career to date in a bid to land a seat in F1, as FRANKIE MAO explains

It was right after midnight on 11 May in Shanghai when Guanyu Zhou celebrated his maiden victory in the F2 virtual series at the Circuit de Barcelona-Catalunya. Appropriately, it was exactly one year after the Chinese driver had claimed the first podium of his debut season in F2 at the same venue.

In early 2019, when Zhou landed at the rebranded Virtuosi Racing outfit which had previously operated the Russian Time team, nobody really knew what to expect from a driver with two wins and three pole positions to his name from his three seasons in the FIA Formula 3 European Championship.

But if fighting back to 10th place from the back of the grid after a brake issue in the Bahrain feature race didn't earn the credit it deserved, the 21-year-old's first visit to the F2 podium at the Barcelona feature race - only the third round of the season - prompted observers from the Formula 1 paddock to raise their eyebrows.

Zhou, who joined the Renault Sport Academy prior to the 2019 season, would later prove that his Barcelona result was not a flash in the pan with two more feature race podiums at Silverstone - where he claimed pole position - and Abu Dhabi, bolstered by sprint race podiums at Monaco and Paul Ricard on his way to seventh in the standings.

That earned him the rookie of the year trophy named in honour of former Renault junior contemporary Anthoine Hubert. Despite not winning a race, he was comfortably ahead of his former F3 team-mate and fellow rookie Mick Schumacher, who took a sprint race victory at the Hungaroring.

"Although the first win has not come yet, I am happy for my results last year, especially when I fought against other senior drivers for the podium," says Zhou in reviewing his rookie F2 campaign. 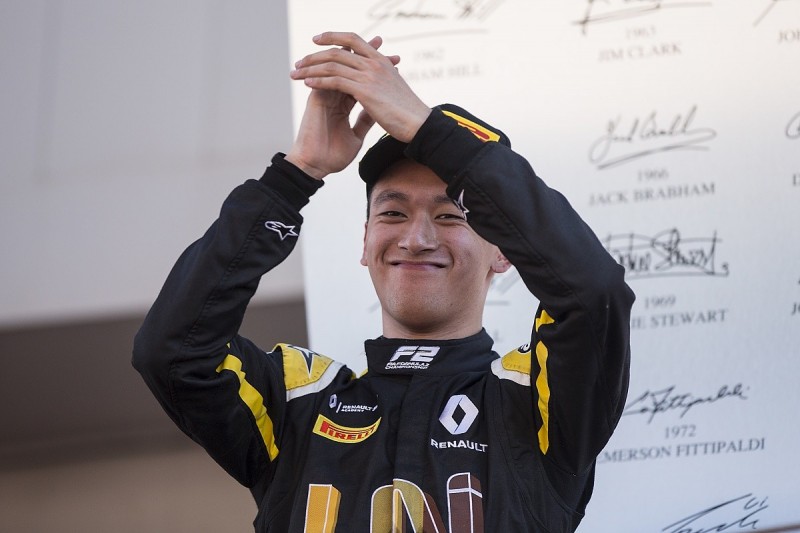 "I was already able to race against them for podiums in the feature race rather than the sprint race, which was my initial goal. Actually, most of my podiums were earned from the first race and last year I was the only rookie standing on podium on Saturday. So, except for a win, it still feels great."

From every aspect, the progress made together with Renault in 2019 looks genuinely promising for Zhou, who is determined to become the first Chinese F1 race driver in the near future.

"My goal is to finish the season in the top three - top four will be fine - as long as I could get the points I need for a superlicence. Should any chance arise, I don't want to miss it" Guanyu Zhou

At a media briefing arranged by Renault China ahead of the Chinese New Year, when asked by a veteran journalist if he had confidence in achieving his ultimate goal, Zhou simply smiled and replied in a firm tone: "I do."

He added: "I think no one else [from China] has achieved such results. I made the Chinese national anthem play in European F3 before and now we have seen the Chinese national flag flying in F2. I really feel proud about it as it shows what Chinese people are capable of.

"I believe what really matter is that result speaks itself in any sport. As long as you have the result, people will know Chinese [drivers] could do well in motor racing."

While the coronavirus pandemic has delayed the start of the new F2 season, Zhou - who will return with Virtuosi alongside Briton Callum Ilott - has appeared prominently in sim racing events, finishing on the podium in four of his five appearances in F1's Virtual Grand Prix series with Renault and taking victory in the inaugural Bahrain race. 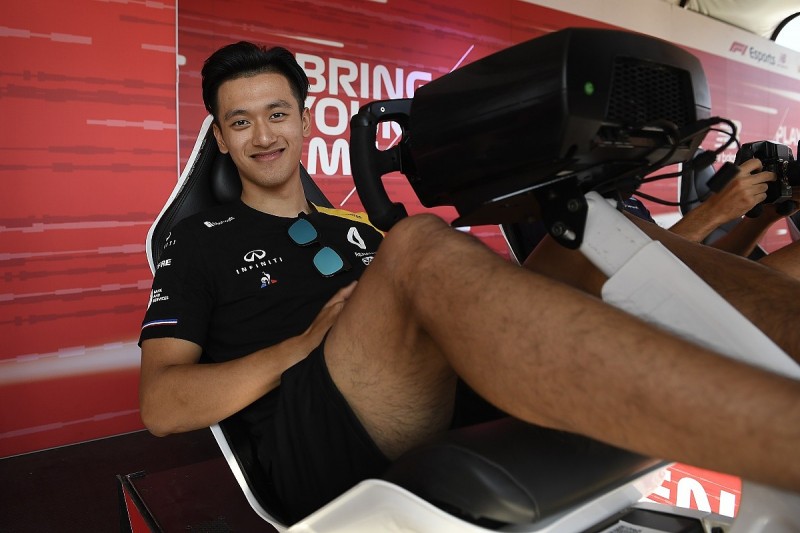 Zhou admits to spending several hours on his simulator every day to replicate the concentration required for real-life racing and sees the results in the Virtual Grand Prix series as nothing but encouragement ahead of the resumption of real racing, with a top-four finish in F2 enough to grant him enough points to apply for F1 superlicence.

The vacancy left by Daniel Ricciardo's move to McLaren for 2021 means this year is even more critical for Zhou. Since Renault returned to F1 as a works team in 2016, Abiteboul has been talking about making its own future star and in Ricciardo's current team-mate Esteban Ocon, it has just that.

But despite the rumours linking big names world champions Fernando Alonso and Sebastian Vettel to the seat, Abiteboul didn't rule out the possibility of picking up a driver from its own junior pool when speaking to Autosport as part of the #thinkingforward series, and stuck to the line that a replacement for Ricciardo won't be chosen until after the season has started.

"As we speak now, it's a bit audacious to think that, but who knows? With one more season of F2 for them, it could be the right thing to do. And that's typically the sort of thing that we could not decide when the decision had to accelerate with Daniel."

Irrespective of Abiteboul's professed eagerness not rush to a decision, Zhou reckons he must keep delivering in his own campaign to keep his name in the picture.

"My goal is to finish the season in the top three - top four will be fine - as long as I could get the points I need for a superlicence," he says. "Should any chance arise, I don't want to miss it." 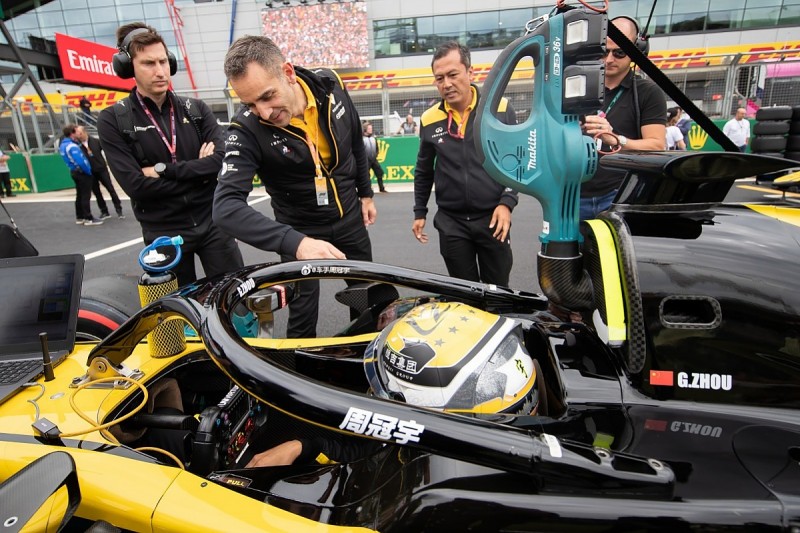 Although the global economic implications of the pandemic has raised concerns that some F2 drivers will struggle to see the season out, the field still features a formidable line-up.

Zhou was the best qualifier among last year's rookies - his Silverstone pole the only occasion qualifying was topped by a rookie all year - and he managed another two front-row starts at Paul Ricard and Monza respectively. Nevertheless, he knows that he'll have to raise his game if he is to achieve his goal, with more consistent performances in the feature race one of the key areas he's keen to address.

"This year I have a higher expectation, because if you want to finish on a top position in the championship, you need to focus more on the first race which offers the full points" Guanyu Zhou

Across the 11 rounds last year, Zhou's average finishing position for feature races was 4.8, while for the sprint race it was 6th - but two feature race DNFs at Baku and Monza bring that average down.

"In the beginning of last year, my target was trying to fight for podium in the second [reversed grid] race of the weekend, but my first podium came in the first race in Barcelona," he says.

"This year, obviously I have a higher expectation, because if you want to finish on a top position in the championship, you need to focus more on the first race which offers the full points. It will be my priority this season."

"This definitely is an area that I need to improve, which I believe I can, with the experience gained from last year," he says. "It's all about strategy when you get stuck in the middle. 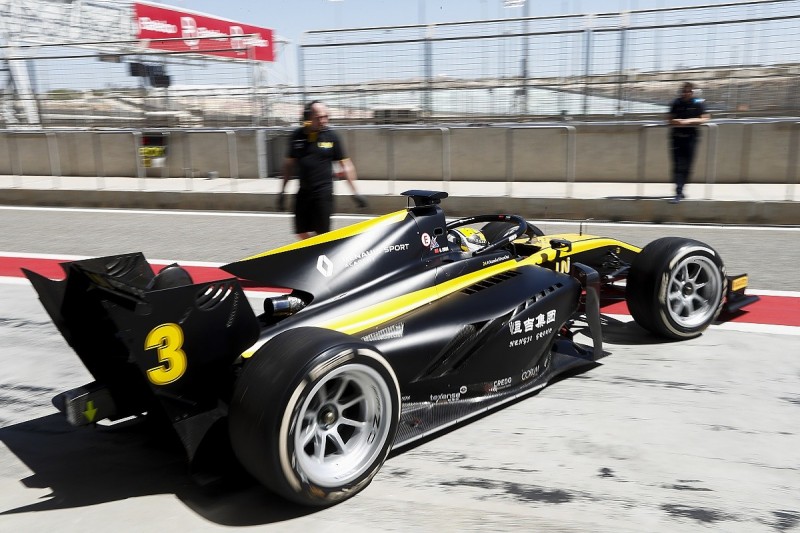 "If you push too aggressively at the beginning to try to pass the cars ahead, you absolutely will lose your tyres and cost a lot of time in the second half of the race. So tyre management will be critical. But I am confident I could make another step."

Tyre management could be tricky for all drivers with the switch to Pirelli's new 18-inch tyres this year, but Zhou is optimistic that the experience he and fellow second-year driver Ilott can bring to the table will counteract the learning curve.

"Because this year's tyre has changed, I hope our team could adapt to it and find the best set-up for our cars as early as possible, especially at the beginning of the season," says Zhou. "We have two drivers in our second full-season in the series, which should help the team improve with the lessons we learned from last year.

"The first few races will have many back-to-back weekends. If we can manage to get a good set-up to grab as many points as possible, with the experience as our advantages, it will make the second half of the season easier.

"I hope the car can do whatever I want, and we could have good results."

As chances favour the prepared mind, if Zhou does manage to tick off all the boxes, then the young man himself and the nation behind will be one step closer to fulfilling the dream they share. 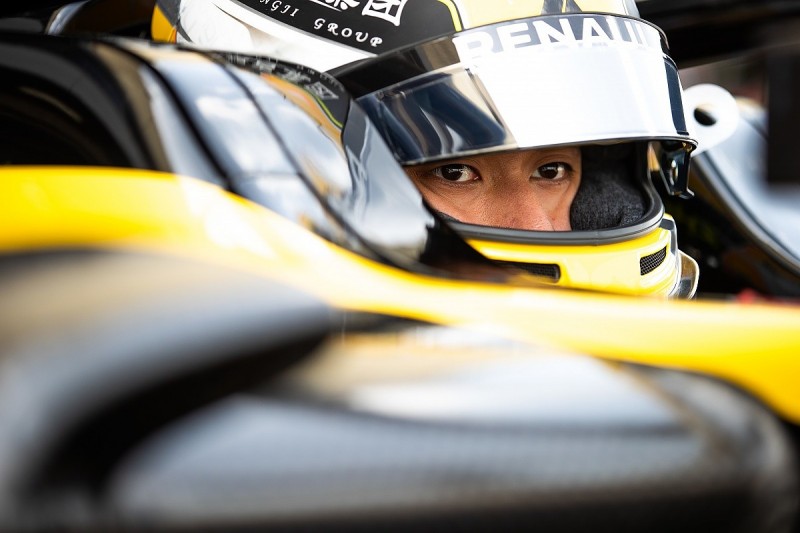