Verstappen set the pace early on in the 90-minute session using soft-compound Pirellis, setting a time of 1m17.509s to take top spot just ahead of Red Bull team-mate Daniel Ricciardo.

Vettel, who was only fifth and seven-tenths behind Verstappen on the first-run times when also on softs, then secured first place with a best time of 1m16.834s using ultrasofts.

After Vettel went to the front, the two Red Bull drivers completed their ultrasoft qualifying simulations and Verstappen slotted in behind.

Ricciardo, using an older-specification Renault engine than team-mate Verstappen, was third fastest and 0.153s slower than his team-mate - complaining about the balance not being quite right.

Kimi Raikkonen, one of the few to set his initial lap time using the mediums, was one of the later drivers to complete his qualifying simulation and went into third place - setting the best final sector time of the session along the way.

This meant the Mercedes drivers, Lewis Hamilton and Valtteri Bottas, were fifth and sixth having both had to abort their qualifying simulation runs.

Bottas went first, but after some rear-end snaps had a bigger moment on turn-in to the Turn 12 right-hander and aborted the lap.

Hamilton, who was not far behind Bottas on the track, also struggled with the rear end but held on to the final right-hander when the rear end stepped out and pitched him wide.

That cost him well over a second and meant his fifth place was secured by his early pace on softs, 0.281s faster than Bottas. 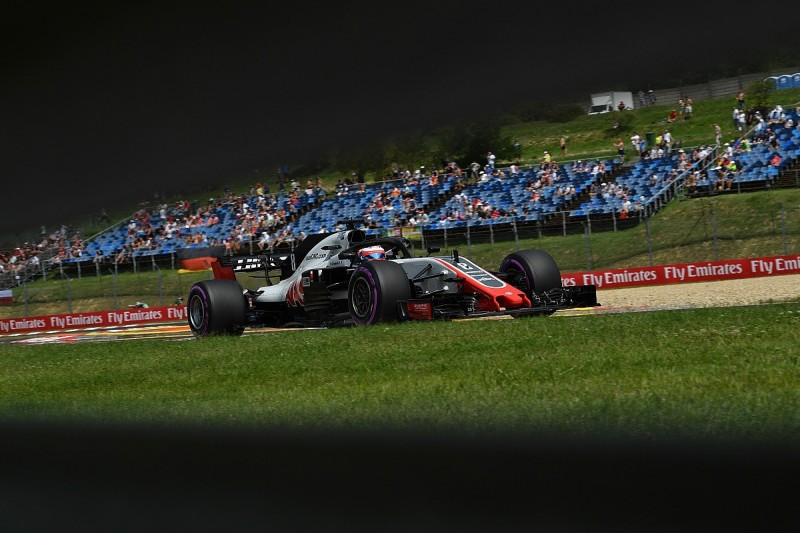 Romain Grosjean secured best-of-the-rest honours for Haas with a lap of 1m18.168s shortly before the halfway mark of the session.

That relegated Renault driver Carlos Sainz Jr to eighth place by just over three-tenths of a second.

Sergio Perez jumped into 11th place with 27 minutes of the session remaining, just under a tenth of a second off the top 10.

This shuffled McLaren driver Fernando Alonso, who had just set his time, down to 12th - two seconds off the overall pace.

It also bumped the second Haas of Kevin Magnussen, complained earlier in the session about understeer and a slight engine problem, down to 13th.

Nico Hulkenberg had a late start to the session after stopping in the morning session, which triggered a precautionary energy store change.

He hit the track just before the halfway mark and went straight into running on ultrasofts, taking 14th place ahead of Toro Rosso's Brendon Hartley.

Sauber driver Marcus Ericsson recovered from an early-session spin to set 16th fastest time, just under a tenth of a second faster than team-mate Charles Leclerc.

Ericsson ended the session under investigation for an unsafe release from a pitstop.

Vandoorne, who has had a chassis change after struggling in the previous two race weekends, spun when he touched the grass at the entry to the Turn 5 right-hander on his first qualifying simulation lap and had to rely on his soft-tyre pace for his position.