The Hungaroring is a challenge for Formula 1 drivers and engineers alike, and is often likened to Monaco but without the walls

But while its high-downforce nature makes it comparable to street circuits, it rubbers in like more traditional tracks and, to further add to complications, high temperatures mean cooling brakes the power units becomes critical - which results in aerodynamic efficiency being sacrificed.

It's a track where extra grip pays off more than straightline efficiency, which is why teams focus more on finding what is known as 'dirty downforce'. 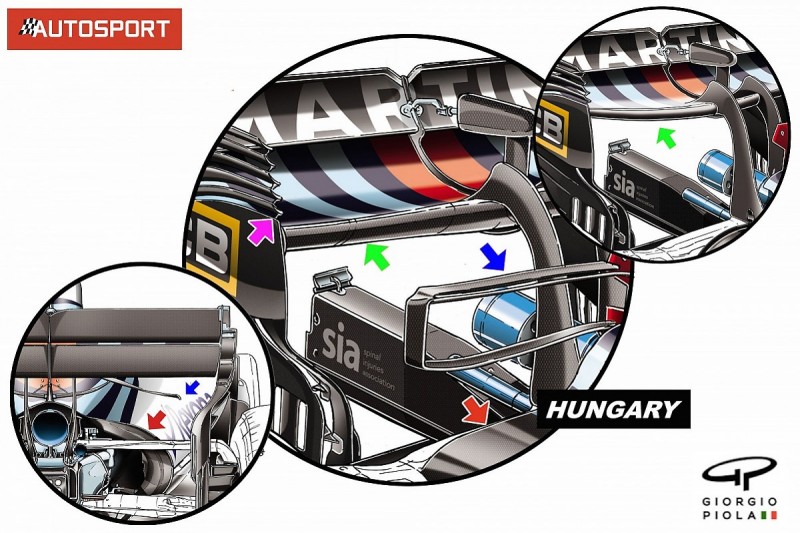 Williams's FW41 may still lack performance, but the front wing introduced in Germany has at least made the car more predictable.

The team arrived in Hungary with a new, rather large, T-wing (blue arrow) featuring two main horizontal surfaces either side of the engine cover that are hooped together by endplates.

The lower of these two surfaces helps to drive the airflow travelling over the top of the sidepod's surface, and the hot air exiting the enlarged cooling outlet, which was last used in Bahrain (lower left inset, red arrow).

The upper surface works the airflow a little harder, sitting in a similar position to the regular T-Wing, and features a slot along its length.

The rear wing also featured changes, and the mainplane was swapped out for a conventional shape, rather than the 'spoon' wing seen elsewhere (green arrow).

This push for downforce consequently created more drag, so the team added an extra open-end style louvre to alter the tip vortex being created (purple arrow). 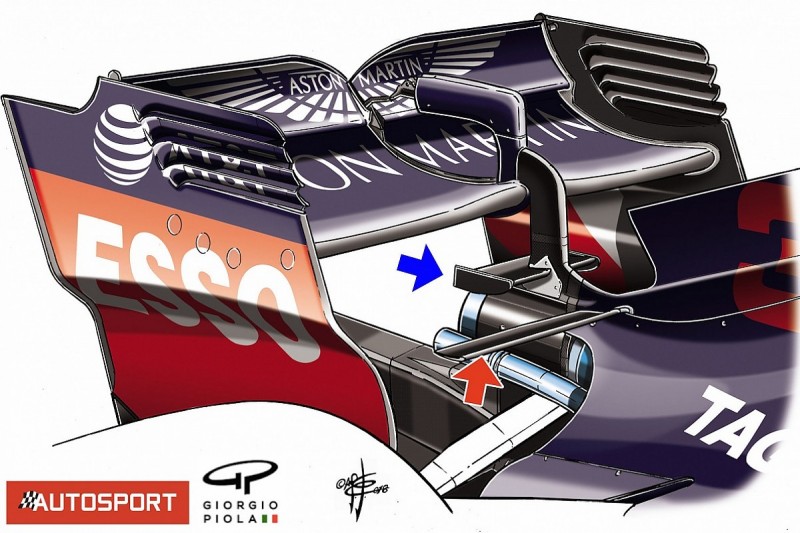 Red Bull has to consider its aero efficiency ratio more often than its rivals, given its power deficit to Mercedes and Ferrari, but that allows it to throw caution to the wind at high-downforce tracks.

Just as it was in Monaco, the RB14 was fitted with a high-downforce rear wing and complemented by a T-wing (red arrow) and a small monkey seat (blue arrow).

The influence of monkey seats has been drastically curtailed for 2018 by the FIA, which is keen to reduce the impact aerodynamic devices can have on the exhaust.

But Red Bull has, when the need arises, gone back to the device to overcome any instabilities that may occur when running an aggressive rear wing.

Most of the teams have run a T-wing in one form or another at the majority of races, teasing a little more downforce and stability from the surface for negligible drag. 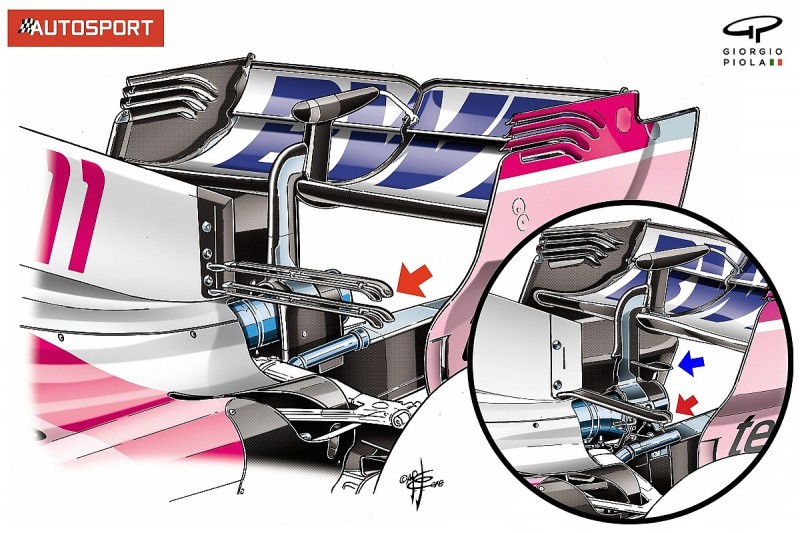 Starved of budget early in 2018, Force India has slumped slightly - especially compared to the success it enjoyed in the previous two seasons - knowing it has to be more cautious about its timing of introducing new parts.

With aerodynamic efficiency less of a concern at high-downforce circuits, the team added a pair of double T-wings in Monaco and Hungary instead of its usual single-element part (inset, red arrow).

It also toyed with, but never raced, a small monkey seat winglet hung from the rear wing centre pillar over the exhaust (inset, blue arrow).

Mercedes admits Hungarian GP strategy too much for 'valiant' Bottas