Honda's upgraded Formula 1 engine provided a step forward in performance in race conditions even though it was primarily introduced for reliability, according to McLaren's Jenson Button

The Japanese manufacturer brought a new engine block and lightweight exhaust to Malaysia, with Fernando Alonso running it in Friday practice.

The results proved positive and Alonso used the update in Japan, with Button also doing so for race day after Honda made a strategic decision to introduce it as the associated penalties would have little impact on his lowly grid position.

In Malaysia, Alonso had been adamant the new engine was "not quicker", saying: "the engine has the same performance, exactly the same horsepower, it's just reliability is a little bit stronger."

But having experienced it himself in Japan, Button said the reliability improvment would have a performance benefit too.

"Reliability helps performance because it means you can run a more aggressive strategy with the engine," he argued.

"So it does help performance in a race, yeah, but in qualifying it shouldn't be any different." 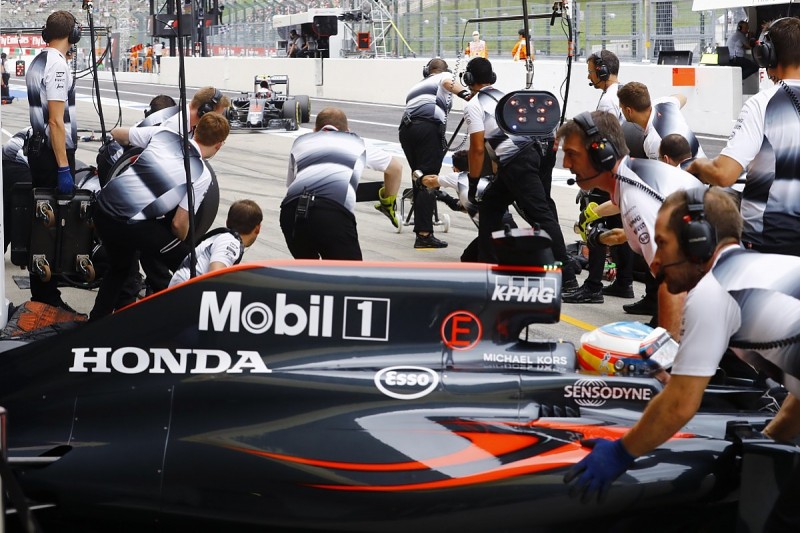 Those gains were not particularly evident at Suzuka, where Alonso described McLaren as "anonymous" on a weekend where neither car scored.

But racing director Eric Boullier said those difficulties were anticipated.

"That track layout doesn't suit our chassis and obviously on the engine side we are still not on the same performance levels as Mercedes," he said.

"So both combined obviously makes a difficult weekend for us.

"But as the drivers said, at some of the other track layouts we are surprisingly better just for the same reasons.

"We can exploit better the power unit, we can also use the car in some different attitudes where we know we are strong and we can be maybe the best in some conditions."

Honda is hoping to make big performance gains next season, when development is opened up, but wanted to focus on reliability for its latest update.

The new engine block and lightweight exhaust delivered on that, with Honda admitting the changes make it more confident of getting through the remaining four races without issues.

Further analysis of the update is being carried out at Honda's Sakura base but the factory's main focus remains on next year's engine, where a separate team has been working on the 2017 unit since it became clear the regulations would change.

As a result, Honda has no plans to use its two remaining development tokens.

Renault F1 team: Nico Hulkenberg is a leader and a motivator