Honda is working on a significantly updated Formula 1 engine designed to raise power levels, having finally appeared to make reliability progress as the 2017 season began in Australia

Fernando Alonso ended up 12th overall in second Melbourne practice, with McLaren able to get some decent running at last - Alonso and team-mate Stoffel Vandoorne covering 84 laps between them.

But with a horsepower deficit still apparent, Honda has revealed work is already under way on a revised engine.

The upgraded version will retain the split turbine and compressor concept adopted for 2017, but will feature hardware changes.

Honda hopes the engine can be ready before June, so could be introduced around the Monaco Grand Prix when teams are likely to switch to the second of the four power units they have available for the season.

"The power difference is big," he admitted.

"To raise the power it is necessary to raise the combustion efficiency, but to do that you have to change the hardware of the current power unit.

"So I am developing an improved power unit, but it will take some time to complete.

"I would like to have it finished and in the car within two months."

Although Honda suffered no major reliability problems on Friday, the vibration issues that dogged the final days of testing have not been cured completely.

It is understood the drivers have been asked to change gear in a different rev range to minimise oscillations, which is costing some lap time.

"The vibration was not that much of a problem today," Hasegawa added.

"However there was a little bit at the time of the upshift, so if we solve that then we may earn a little more lap time." 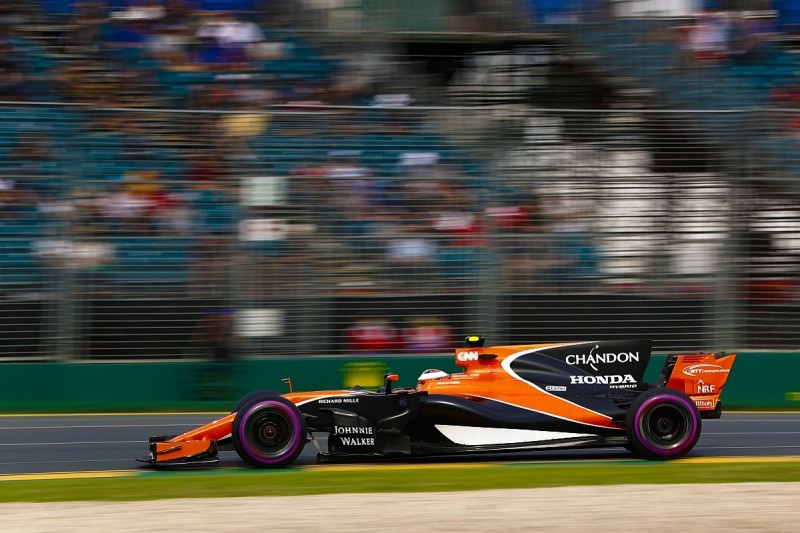 McLaren executive director Zak Brown took some encouragement from the progress Honda had made but acknowledged getting more power was essential.

"Today was alright," he said. "The reliability was good, but the speed was not where we want to be but it was better.

"I think some others had some issues, so I don't know if today is representative of where we will be tomorrow in qualifying.

"I hope so because 12th would be a little bit better than anticipated.

"But it was only free practice and day one. You don't know who turned it up and who was on what fuel load. But today was a good day."

Asked about the vibrations, he replied: "They have been improved. But I think it is too early to say that things have been solved, because we haven't done a GP distance.

"But it was good that we got some good laps, more laps, than we had done in any one day.

"The drivers liked the car. Fernando and Stoffel said the car feels very good, looks good - now we just need to get further up the grid."