Sergio Perez won his first Formula 1 race for Red Bull in the Azerbaijan Grand Prix after longtime leader Max Verstappen blew a tyre and crashed out late on.

From third on the grid, Red Bull’s Verstappen passed Ferrari’s pole-sitter Chares Leclerc on track and then benefitted when Mercedes’ Lewis Hamilton suffered a slow pitstop to overcut ahead of him.

Perez also got ahead of Hamilton and retained second place for what looked set to be a Red Bull 1-2, despite a restart after a safety car following Lance Stroll’s huge crash due to a blown tyre on his Aston Martin.

Verstappen was cruising to victory with three laps remaining when his left-rear tyre blew too, putting him into the wall and out of the race.

The race was red-flagged, allowing the track to be cleared and all cars were able to change tyres. From a standing start, for the final two laps, Perez was beaten off the startline by Hamilton, but the seven-time world champion locked-up and went straight on at Turn 1, dropping to the tail of the field.

Perez won but was instructed to stop his car straight after taking the chequered flag. 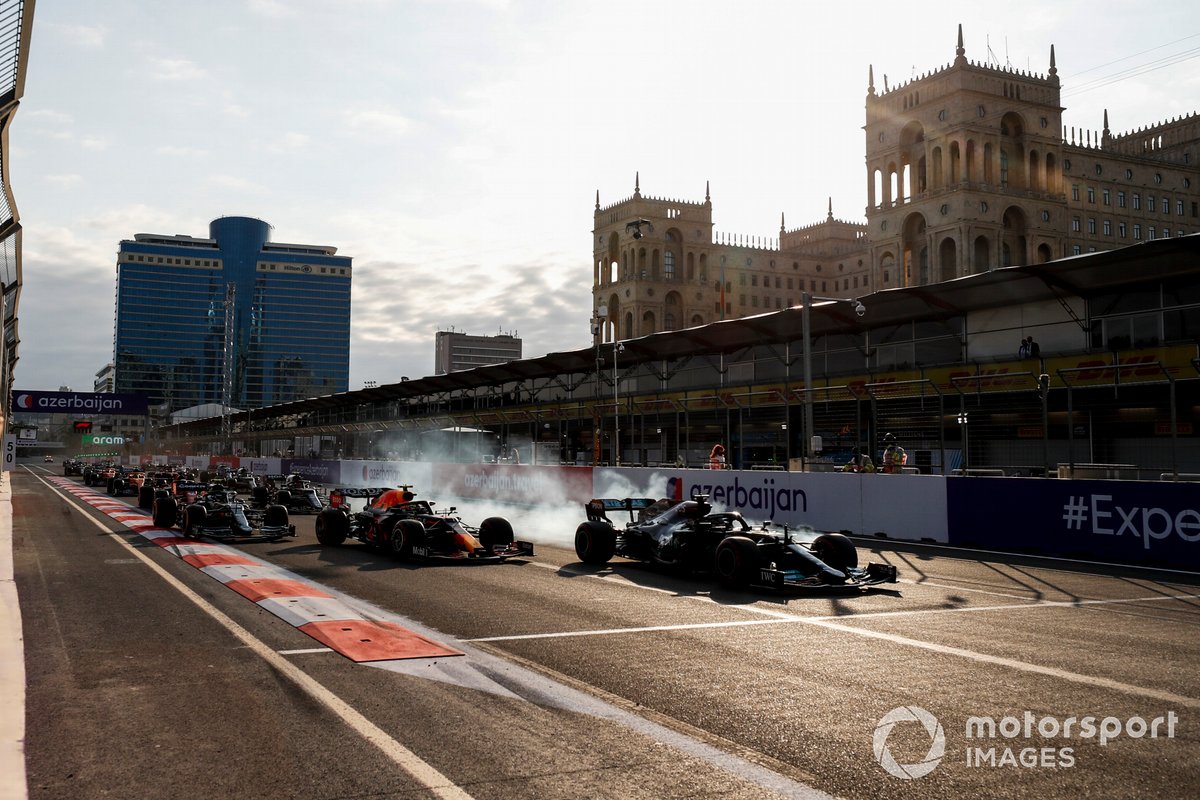 From pole position, Leclerc led Hamilton and Verstappen, with Perez moving past Pierre Gasly (AlphaTauri) around the outside at Turn 4. Ferrari’s Carlos Sainz Jr dropped to sixth, having been passed by Perez at Turn 2, with Fernando Alonso (Alpine), Yuki Tsunoda (AlphaTauri), Sebastian Vettel (Aston Martin) and Valtteri Bottas (Mercedes) rounding out the top 10.

Hamilton slipstreamed past Leclerc to lead at end of lap two and Ferrari then dropped into DRS range of Verstappen, who passed Leclerc at the start of lap seven. Behind them, Tsunoda passed Alonso for seventh.

Perez passed Leclerc for third, prompting Leclerc to pit on lap 10 to switch to hard tyres. Leader Hamilton stopped on lap 12, but suffered a slow stop of 4.6s as Mercedes had to wait for Gasly to go past to release him.

Verstappen rejoined well clear of Hamilton after stopping on lap 13. Perez pitted a lap later, but he too had a slow stop of 4.3s, and he rejoined in second just ahead of Hamilton. Gasly moved ahead of Leclerc in the pitstop cycle for fourth.

Hamilton had one serious attempt at passing Perez after the stops, but the Red Bull stayed ahead. Meanwhile, Vettel ran a long first stint, leading the first laps for the rebranded Aston Martin team. The four-time world champion led until lap 18, rejoining ahead of Tsunoda, battling Lando Norris (McLaren) and Bottas in seventh.

Sainz went down the escape road at Turn 8 after locking up soon after his pitstop, which dropped him to 14th. He spent the rest of the race recovering, passing Antonio Giovinazzi (Alfa Romeo) and Alonso.

Stroll ran even longer on his first stint than team-mate Vettel after crashing out of qualifying, and held fourth on lap 31 when he crashed heavily on the start/finish straight due to a left-rear blowout. That caused a safety car, but as the pits were closed – due to Stroll’s car blocking the pit entry – it only served to close the pack up rather than switch the order.

Only Alonso, Giovinazzi, George Russell (Williams) and Mick Schumacher (Haas, whose left-front wasn’t fitted properly and he had to be pushed back) came into the pits when it was opened and took on soft tyres. 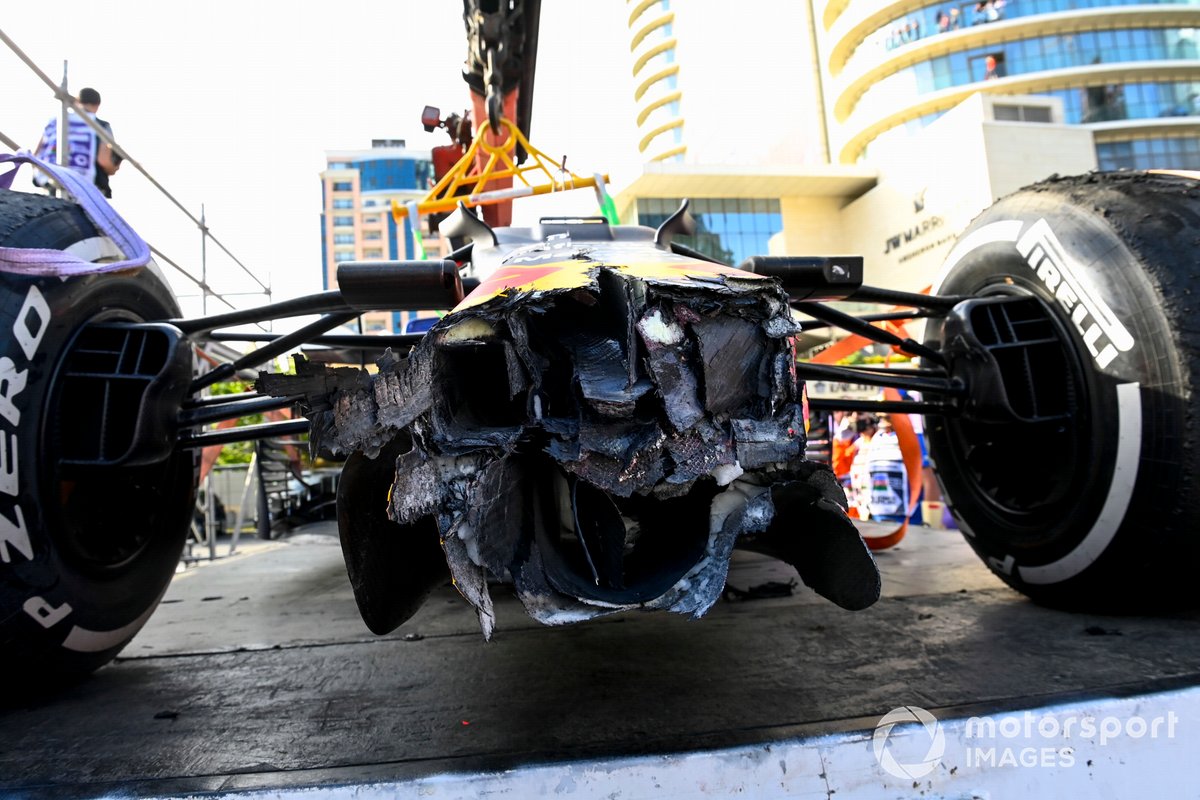 The race restarted on lap 36, with Verstappen leading and Perez blocking Hamilton. On fresher tyres, Vettel passed Leclerc for fifth at the exit of Turn 1, and almost got Gasly at Turn 3. Vettel had to wait until the start/finish straight, where he blasted past Gasly for fourth. Meanwhile, Sainz got past Daniel Ricciardo (McLaren) for ninth.

Verstappen pulled clear out front, while Perez fended off one more DRS-assisted attack from Hamilton. Then with just three laps remaining, Verstappen crashed out of the lead as his left-rear tyre blew, just as Stroll’s had. He got out of his wrecked car and kicked the tyre.

That handed Perez the lead, ahead of Hamilton, Vettel, Gasly and Leclerc as the race was then red-flagged to clear the track of debris and to allow the cars to change to soft tyres.

It was restarted with a standing start for the final two laps, with Hamilton jumping ahead of pole-sitter Perez but locking up and having to use the run-off at the first corner. Perez led Vettel, Gasly and Leclerc, as Norris and Alonso battled past Tsunoda. Hamilton rejoined in 16th.

Starting the final lap, Leclerc passed Gasly for third, but Gasly immediately took the place back into the corner, leaving Leclerc vulnerable from Norris.

Esteban Ocon (Alpine) retired with an engine issue after a handful of laps.