As one of the few anti-clockwise circuits on the Formula 1 calendar, Interlagos is already in a minority – but its combination of fast and technical corners make it a unique driving challenge. Former F1 racer Gianni Morbidelli explains why it’s his favourite track in our continuing series and recalls his little-remembered standout lap from 1994

There have been plenty of famous drives at Interlagos down the years that will be talked about for generations to come. Ayrton Senna’s emotional home win, stuck in sixth gear in the 1991 Brazilian Grand Prix, is often cited, while Juan Pablo Montoya’s breakout Formula 1 drive came 20 years later after a robust pass on Michael Schumacher. Felipe Massa upheld his end of the bargain in the famous 2008 title decider with a dominant win, while his victorious adversary that day Lewis Hamilton became the latest driver to produce an Interlagos masterclass in 2021 by defying Max Verstappen after starting 10th.

It would be easy therefore to overlook the achievement of Gianni Morbidelli qualifying a career-best sixth for the 1994 Brazilian GP in Alan Jenkins’ humble Footwork, 0.312s behind the Williams FW16 that Damon Hill would take to six grand prix wins that year and only narrowly miss out on the world title.

The Italian describes the lap “as one of the most gratification [giving] that I had in my life”, not least because it came in his first race back after sitting out the 1993 F1 season while he raced in Super Touring with Alfa Romeo. Unfortunately, his race lasted only five laps before the gearbox broke to deny a likely points score, given fourth-place finisher Rubens Barrichello's Jordan started eight places behind him on the grid.

“We did only 120 kilometres or something like that before flying to Sao Paolo, and I qualified sixth on the grid,” remembers Morbidelli, who singles out the 2.677-mile circuit as his favourite track in conversation with Autosport.

“In that period don’t forget there was the two Ferraris, two Williams, two McLaren, two Benetton, two Tyrrell, they were quick. It was quite hard to qualify in the top 10 and I did immediately sixth on the grid. That car was incredible, the best car I drove ever.”

Morbidelli had a stop-start F1 career that counted 67 grand prix starts between 1990 and 1997, including one for Ferrari as a replacement for the axed Alain Prost at the monsoon-esque 1991 Australian Grand Prix.
He only completed three full seasons during that time, also sitting out the entirety of the 1996 season after scoring his sole F1 podium at the 1995 season-ending Australian GP, before returning for a partial campaign at Sauber in 1997. 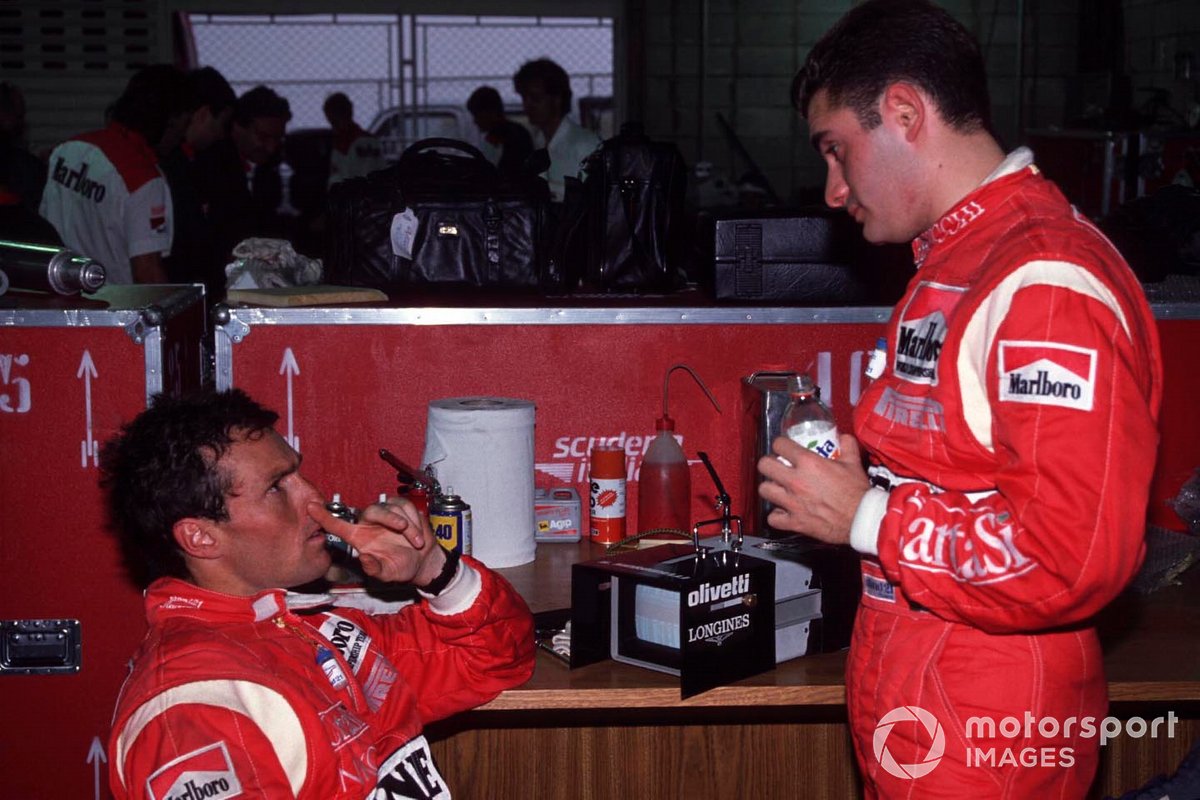 Morbidelli (right, with Scuderia Italia team-mate Andrea de Cesaris), made his F1 debut at Interlagos in 1990

His F1 career technically began at Phoenix in 1990 when the Italian Formula 3 champion stepped in at the Scuderia Italia Dallara team to replace a hepatitis-inflicted Emmanuele Pirro. But he didn’t qualify for the race as a crash on the tricky street track that prevented him from setting a competitive time left him unable to respond when rain rendered further improvement impossible.

So it was at the Brazilian track where Morbidelli – who spent 1990 testing for Ferrari while racing for Forti in International Formula 3000 – made his F1 race debut before stepping up full-time with Minardi for 1991. But Morbidelli says his choice isn’t at all connected with the emotion of his first F1 start, when he was the last classified runner in 14th. He cites several high-speed tracks with undulations as standouts, with Mugello, Suzuka, Portimao also featuring among his favourites.

“I don’t love Sao Paolo because it was my debut in Formula 1, it was just the feeling that I had there when I went there and I drove for the first time,” explains the 54-year-old, who today coaches drivers on the Italian iteration of Mini Challenge’s Academy scheme, and supports Italian Carrera Cup driver Giorgio Amati.

"It was impossible to describe, an emotion and something that only the drivers that drove in that period with those cars and those tyres can understand" Gianni Morbidelli

“I went out from the car and said, ‘Wow, I really like it’. It was quite bumpy in that period, but it was nice.

“I always like the track with the up-and-down with this very quick corners where you cannot breathe, but for me my preference is Sao Paolo.”

Morbidelli liked several elements of the track, citing the Senna S that opens the lap and the uphill double right of Turns 6 and 7 where “you feel all the g-force, you feel all the emotion that a Formula 1 can give you”.

“It was unbelievable in corners like that, especially in that period we had soft tyres for a sort of qualifying tyre and you had to push a lot,” he says. “The difference between the tyres that we used in the race and tyres that we used in qualifying was something like a couple of seconds, a huge difference, so it was also difficult to understand the limit of the car, the limit of the tyres, your limit. 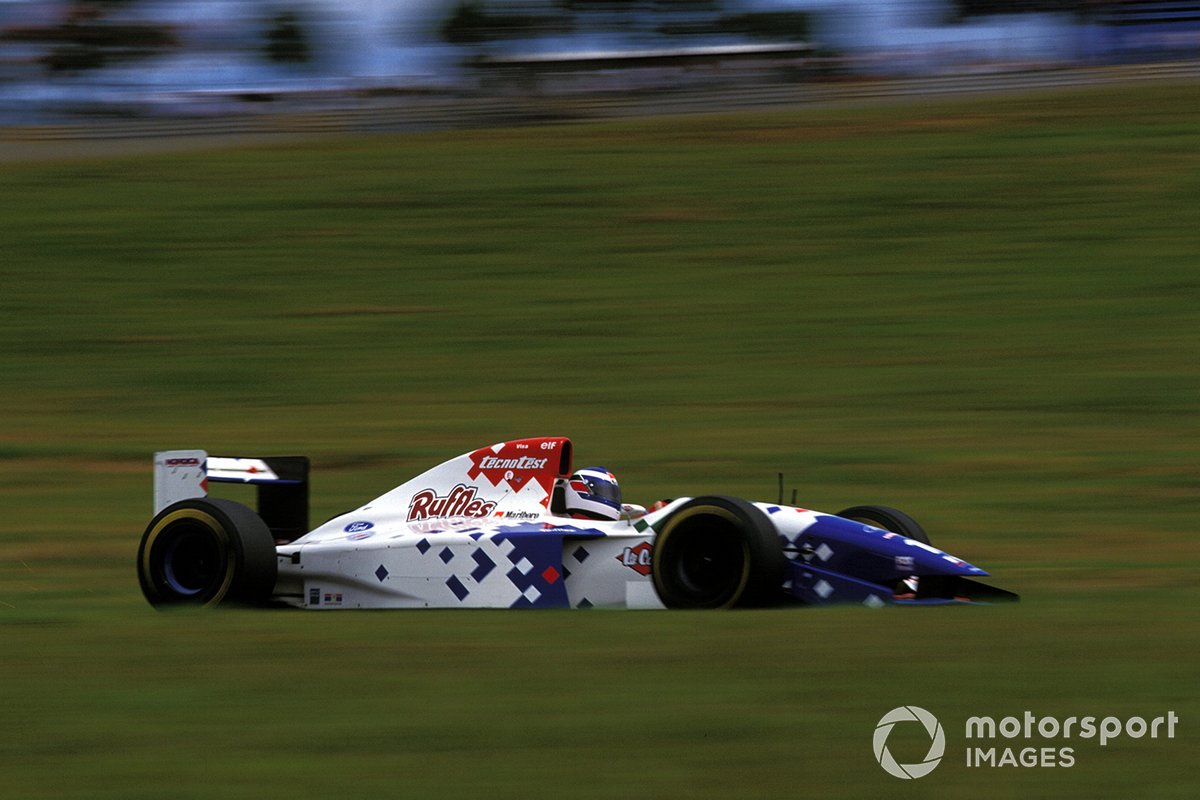 “It was impossible to describe, an emotion and something that only the drivers that drove in that period with those cars and those tyres can understand.”

Morbidelli adds that the counter-clockwise track – the first time he’d driven an F1 car on a track predominantly consisting of left-handers – “was extremely hard physically” when he made his F1 bow.
With his head exposed and no headrest to lean on through the fast final sector of sweepers – “it’s not like now they have the protection and they are able to relax a little bit with the head on the lateral support” – he even admits that he hoped he would be sidelined by mechanical problems, so “understood immediately that I had to work harder physically”.

“I was so tired during that grand prix that I prayed that my engine would break,” he says. “I saw it all the time the grand prix on television and [they would] always break the engine, always have a mechanical problem – so why does it not happen to me? It was so difficult, when I finished it was like to make a boxing match with [Mike] Tyson. I was destroyed!

“But I was extremely happy. It was like a touching the stars with your hand, it was an incredible experience.”

He never scored points in five starts in Brazil, but took eighth with Minardi in 1991 and was seventh the following year with the same team. 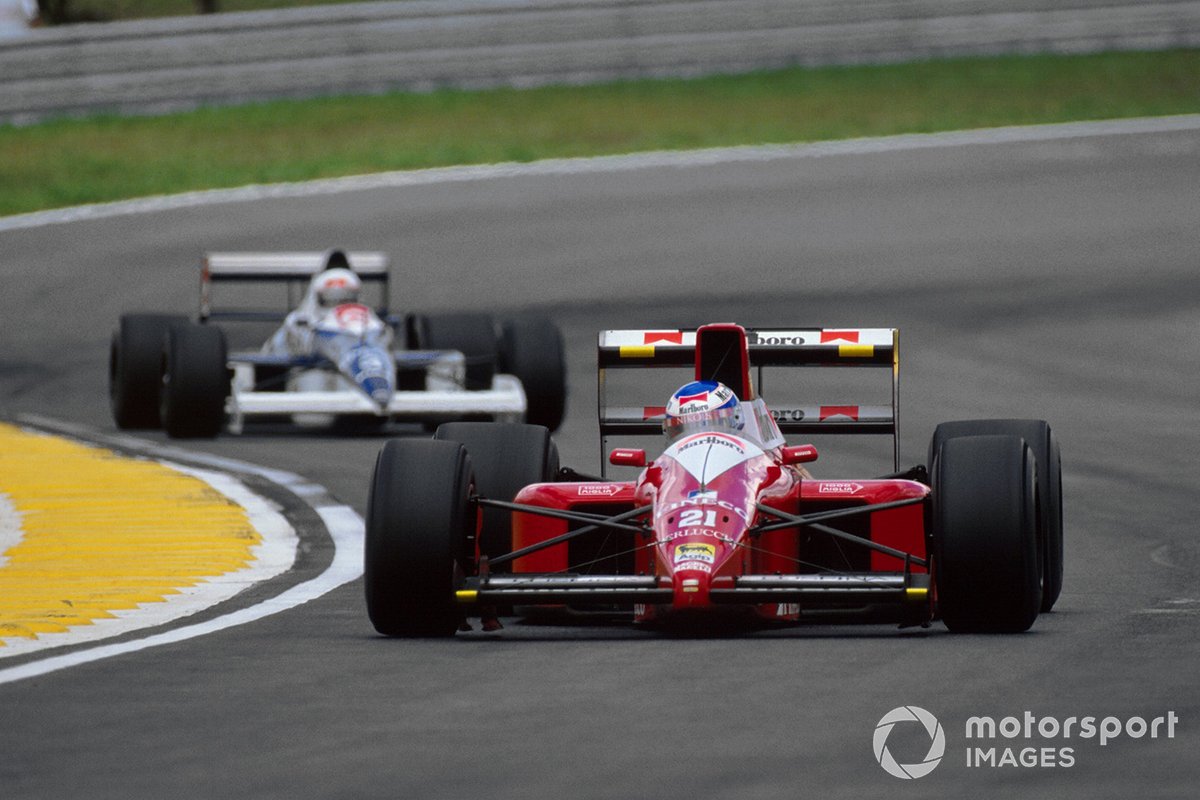