Sergio Perez and Esteban Ocon scored with seventh and eighth in last weekend's German Grand Prix, moving the team ahead of Haas into fifth place in the constructors' championship on countback.

But a financial squeeze has slowed down the progress with new parts at Force India, and chief operating officer Otmar Szafnauer admitted the team has not been able to improve its car at the rate it would like.

"To win a development race you need the resources to be able to develop," he told Autosport.

"We are suffering, truth be told. If we had more resources, both financial and internal manufacturing, we'd have parts on the car quicker. And in a development race, that hurts you.

"Usually we don't take little steps, we save them all up, and then try to do them all at once, whereas some of the others try to take baby steps, and when you take baby steps you learn as you go along, and that helps your direction.

"The whole thing is better when you have the resources."

Szafnauer said there will come a point where it will be too late to manufacture and introduce upgrades that are designed but currently on hold, and the focus will have to switch to 2019.

"It's how you use your resources, not just your money but where you spend your windtunnel time," he said. "That's important too. The quicker the better." 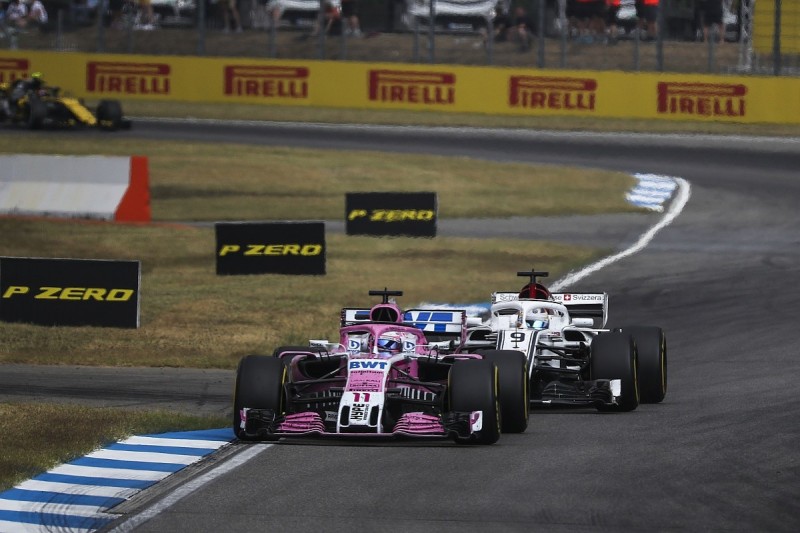 Szafnauer said Ferrari's recent upgrade, which has boosted Haas and Sauber, has made life even harder for Mercedes-powered Force India.

"It does put a premium. Even [Marcus] Ericsson was looking to overtake Esteban. Their powertrain has come on leaps and bounds," he said.

"Mercedes have done a fabulous job for us over the years, but all credit to Ferrari, I think they've probably got the most powerful powertrain in F1 now.

"To have Haas and Sauber get us down the straights is something new for us. It's an amazing powertrain. I just hope all those battery rumours have been put to bed."

Szafnauer felt the team made all the right strategic calls to earn its results in Germany, especially as Ocon was as low as 12th in the early stages and had gone out of qualifying in Q1.

"We could have ended up with nothing if we got the decisions wrong on the pitwall, but we just kept our heads and made some decent calls," he said.

"All credit to our engineers, our senior race strategist and our strategists, they did a good job.

"And the drivers, you need their feedback too, to say what they should be doing, because they're the ones that know how wet the track is what the conditions are."

How Hamilton pulled off his German GP miracle

Why Lewis Hamilton was only reprimanded for German GP pit offence