The FIA has introduced additional rear wing technical checks after Formula 1 qualifying in Qatar as part of a fact-finding mission amid ongoing complaints from Red Bull about Mercedes.

Horner said on Friday in Qatar that Red Bull was prepared to protest Mercedes as it questions the legality of its design, noting alleged score marks on the main plane of the W12’s rear wing.

Ahead of qualifying in Qatar, Horner said on Sky Sports F1 that he was “really delighted” that the FIA had “introduced a fact-finding mission here” and that new tests would be introduced after qualifying.

The FIA confirmed to Autosport after qualifying in Qatar that the additional rear wing tests had been introduced, starting on Saturday night, to help gather new technical information.

"As part of our normal checks we have a very well-defined list of tests that we do, described either in Article 3.9 or in TD018, on all cars to check conformity,” said an FIA spokesman.

“The tests you have heard about are intended to gather information and do not form part of the regulatory requirements, but rather could lead to new criteria being applied in the future.

“We will be reviewing these tests with the Technical Group.”

It marks the latest development in the rear wing saga between Mercedes and Red Bull in the closing stages of their F1 title battle. 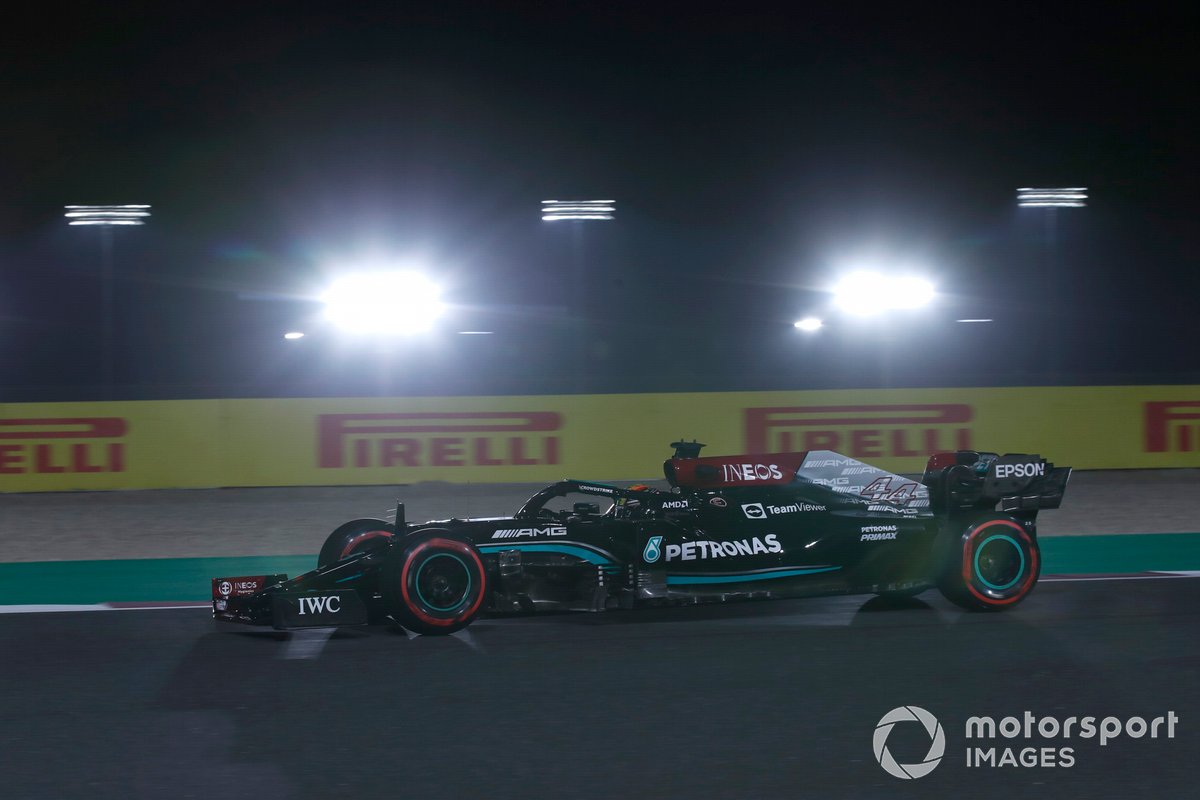 Mercedes F1 chief Toto Wolff said on Friday that he was not concerned about questions over the legality of the rear wing, while trackside engineering director Andrew Shovlin did not understand Red Bull’s claims about the apparent score marks.

“We've invited the FIA to look at it as much as they want, and they don't have any issue with what we've got,” Shovlin said.

“We go to every circuit, we look at what the fastest wing we have is, and that's the one that we'll bolt to the car. And that's what we'll keep doing.”

Horner claimed that the FIA test would see an amount of load get added to the back of the rear wing, estimating it would be equivalent to 70-80kg.

“It’ll be ramped up in stages, so you’ll be able to measure the deflection,” Horner said.

“It’s great that the FIA are being proactive, they’re looking at it. Because our concern isn’t so much here, where straight-line speed isn’t at the premium it is at potentially Saudi and Abu Dhabi.

Asked by Autosport about the added tests on Saturday in Qatar, Wolff said: “I think they’re trying a new load test, also for next year, to have these things more robust and checking how much a wing deflects.

“I think it’s not in the regulations or there is no TD, but it’s more of an experiment. But it will be interesting to see the results, because I believe we [will be] on the good side.”

Alpine executive director Marcin Budkowski told Autosport that the rear wing debate was “one of these things that you have to get closure on”.

“We have to make sure that the rules are clear, and that everybody is complying with the rules,” Budkowski said.

“So our wings are being checked as well tonight in parc ferme. There are standard checks, and they can do more checks if they want to.

“If it's on flexibility, I think it's the right thing to do for the sport."