Red Bull has vowed to protest against Mercedes if it continues to run its rear wing from Brazil. Here's why the team believes the wing's "score marks" point to an outlawed trick by its rival to boost top speed.

Mercedes and Red Bull continue to provoke one another both on and off the track this season, with the intensity turned up another notch at the Qatar Grand Prix, as Christian Horner threatened to protest his rival's car.

Red Bull has announced its dissatisfaction about the legality of the rear wing on the Mercedes on several occasions now, with the team convinced its bitter rival is gaining an advantage outside the bounds of the regulations.

Its suspicions have been fuelled by images, like below, that show apparent score marks next to the main plane.

These alleged scuff marks may point to the main wing element not being rigid and instead flexing up and down, although they could be emulsification caused by a dirty air flow. 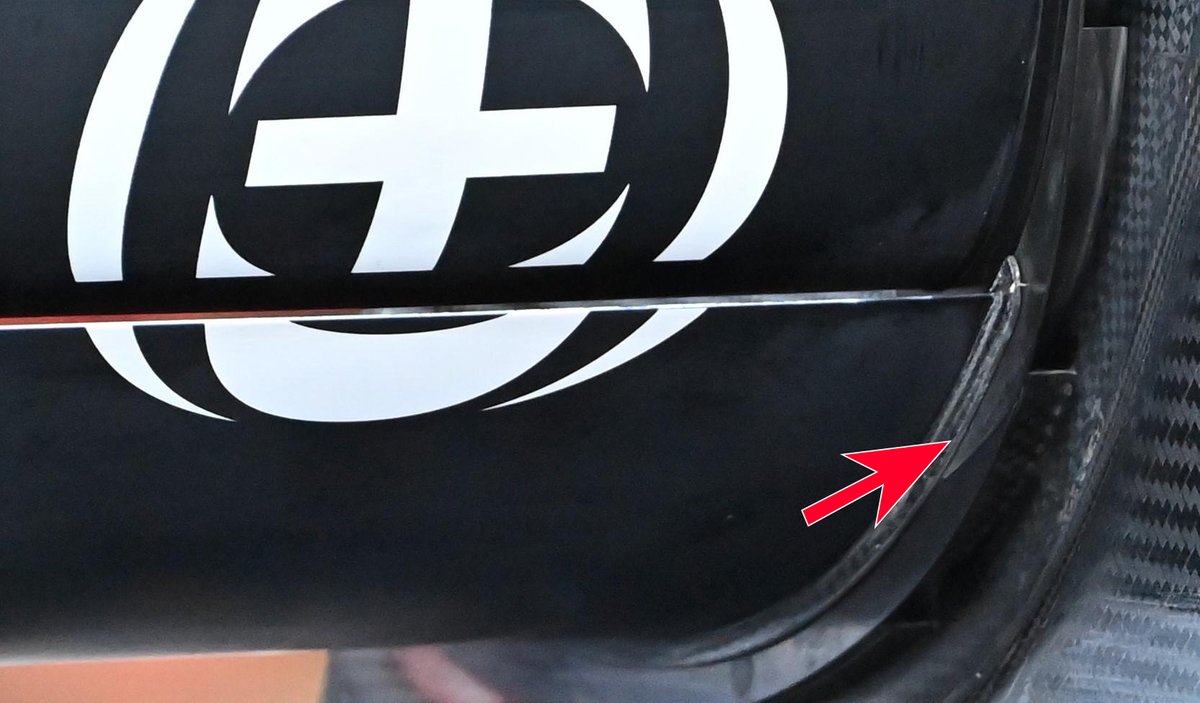 Red Bull's angst with the situation revved up in Brazil, with Lewis Hamilton able to overcome the penalties that demoted him in both the Sprint and main race.

“The straightline speeds we’ve seen in Mexico and Brazil – I think everyone could see in Brazil was not a normal situation," said Horner.

"And yes, a new Mercedes engine comes with an increased performance, but when you have a 27 km/h closing speed and you see witness marks on rear wing endplates that have been marking up from wings that have been flexing, it’s very clear to us what has been going on.”

Undeniably the straightline speed advantage that Hamilton had at Interlagos was impressive and Mercedes found itself excluded after qualifying for a DRS failure.

However, it’s understood that the effect that Red Bull has concerns over is not in regard to the use of the DRS, but rather the flexibility of the wing's mainplane under normal operating conditions. 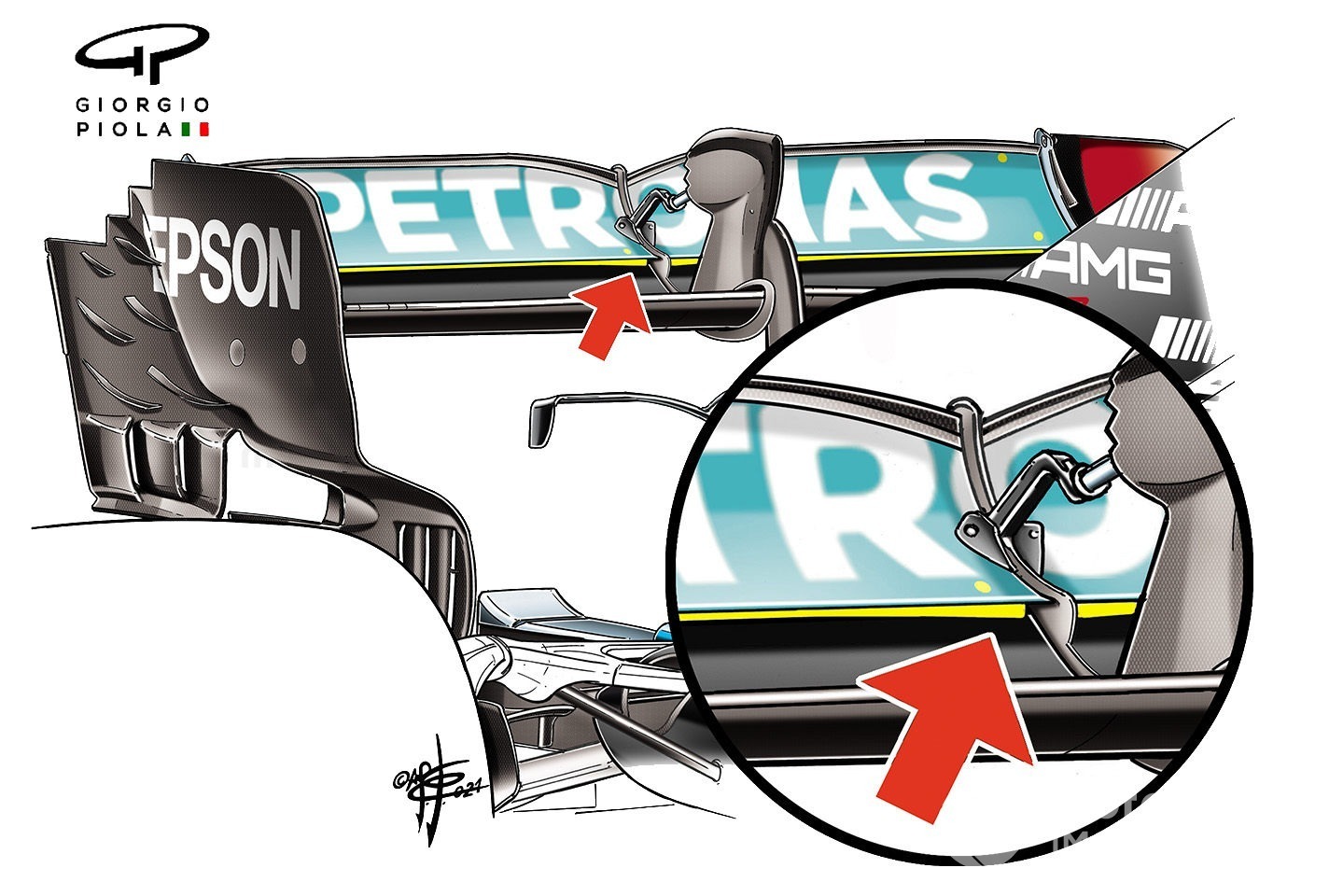 Red Bull appears to suggest that the trailing edge of the mainplane on the Mercedes W12 flexes at speed to create an opening larger than the regulations permit.

If this is indeed what’s happening it would have the benefit of reducing downforce and drag, which would enhance top speed.

In fact, it’s the reason why the slot gap separators were introduced in the mid-2000s, as teams had started to use aeroelasticity in such a way that they could boost performance by manipulating the gap between wing sections.

The slot gap separators have long been seen as a way of preventing this from occurring as they maintain a gap between the two sections but, if a team could find a way to circumvent this, then of course it could offer a performance advantage. 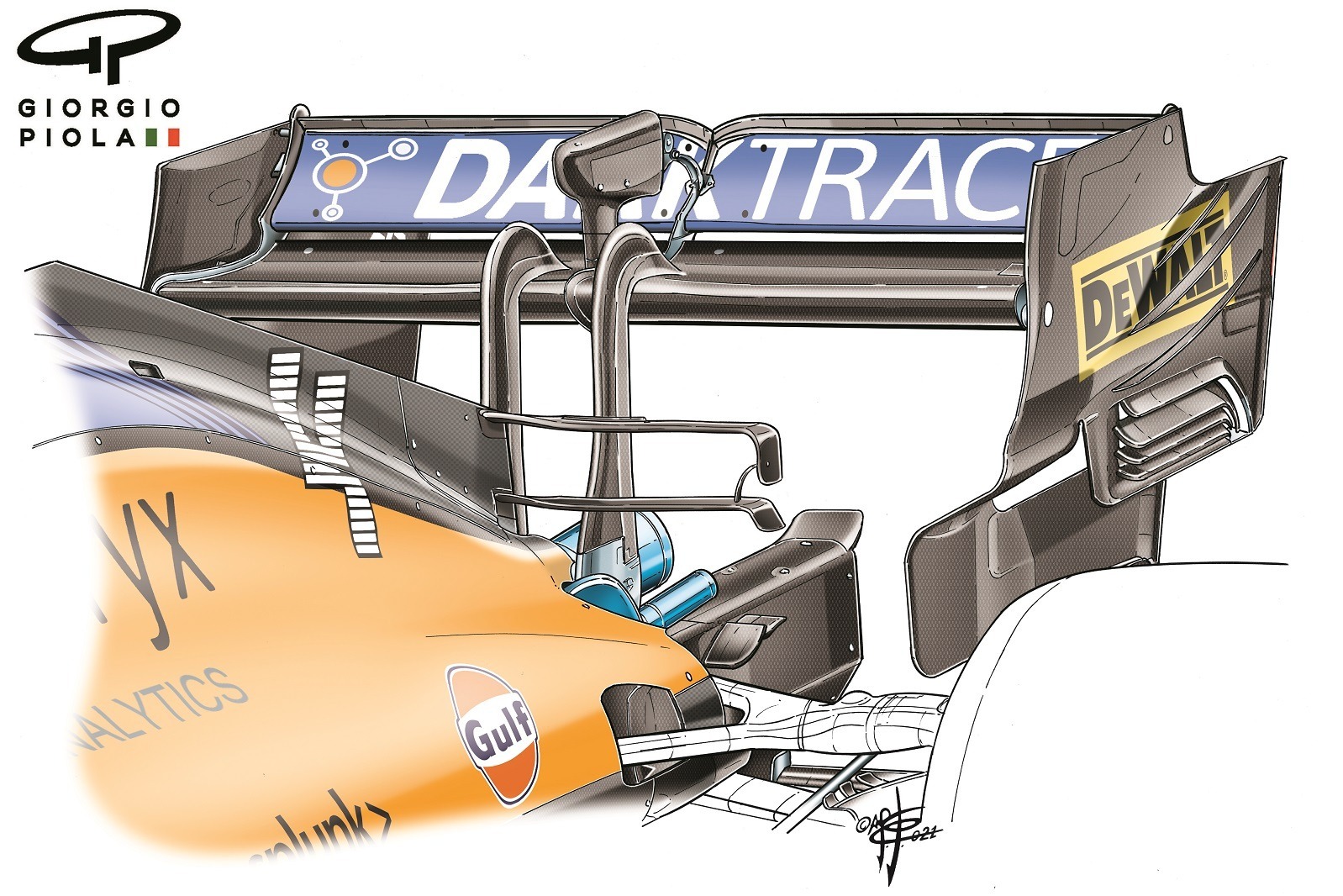 As part of the clampdown on flexi-wings earlier in the season, the FIA now also requires the teams to place a series of dots on the rear wing in order that they can be visually monitored for flexion from the onboard cameras (as seen on the McLaren illustration above, with white dots on the mainplane and black dots on the top flap, in their case).

However, it’s understood that Red Bull has argued these are ineffective in this instance as the dots lie ahead of the area in question and the trailing edge of the wings mainplane is obscured by the top flap when looking at the footage.

During a press conference with Horner and Toto Wolff there was a further exchange, with the former asking, "How do you explain the score marks on the rear wing endplate?", to which the latter responded: "I think it's within what is allowed."

As is always the case in these situations, the distinction comes down to whether the wing is legal when it’s being tested.

Currently there isn’t really a test that would check for compliance in this region, other than measuring the size of the gap statically.

Andrew Shovlin, Mercedes head of trackside engineering, quickly hit back whilst being quizzed on the subject:

"We've had a look at it and there are no score marks, so we're not quite sure what that is, but it seems to be a bit of a story that's not going away," Shovlin told Sky Sports F1.

"From our point of view, we're absolutely happy with what we've got on the car. We've invited the FIA to look at it as much as they want.

"They don't have any issue with what we've got and we go to every circuit, we look at what the fastest wing we have is, and that's the one that we'll bolt to the car and that's what we'll keep doing.

"We'll work out what's fastest, we'll stick it on the car and will not take advice from another team."