Sebastian Vettel was first to admit the Ferrari Formula 1 team got lucky with its Australian Grand Prix victory, and that the SF71H is not where he wants it

But its race-winning start to the 2018 F1 season has given Ferrari a good platform on which to build and improve what is a quite different car from its predecessor.

Here Giorgio Piola and Matt Somerfield look at the key areas where Maranello made significant change this winter in a bid to create a car that it hopes can bring home the world title.

Rather than seeing Mercedes' longer wheelbase philosophy as a weakness last year, Ferrari felt that it was actually the better route to go down with its 2018 car. The SF71H is just over 100mm longer than its predecessor.

This gives the team more options in terms of packaging and weight distribution, and enables it to further improve the work done around the car's midriff in 2017.

The unconventional sidepod design was seen as a standout feature of the SF70H, with the low-slung and forward placing of the upper side impact spar a feature of the Red Bull, Williams and Haas this year.

The idea allows them to push back and redesign their cooling inlets, repackage the internals and reshape the subsequent sidepod surfaces.

It's a holistic approach to improve the sidepod's performance in its entirety, but it was driven by a a primary desire to move the sidepods further away from the wake generated by the front tyres.

A unique design aspect of the SF71H is its wing mirrors, as Ferrari has created two distinct surfaces in order to improve airflow around them.

The outer casing has a hole in the front of it exposing an inner shell, which is carefully shaped in order to optimise flow around the inner surface of the mirror and reduce the turbulence that ordinarily surrounds it.

The design cleverly improves not only the aero performance of the wing mirror in isolation, but in doing so should also improve the surrounding airflows path toward the sidepod's upper inlet.

Even with two pre-season tests under its belt, Ferrari had some questions about its 2018 front wing that it needed answering at the Australian GP - which is why it opted to run some back-to-back tests on a design from last year. 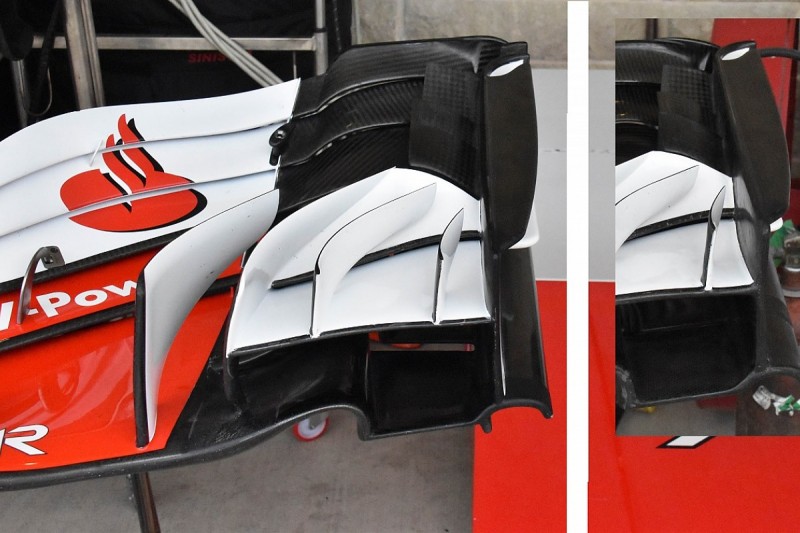 The test was completed with a concept introduced at the United States GP toward the end of last season.

This old wing featured a slightly different arch and footplate in the mainplane's outboard section and an upswept leading edge at the connecting point with the neutral central section.

This is in contrast to the slots used this season which are performing a similar role.

In the end, Ferrari was confident enough to run its new wing for the race.

How McLaren was found out in Australia