Carlos Sainz Jr says he opted for soft tyres in Formula 1’s Brazil sprint race, which helped him gain places at the start, after spotting falling temperatures on the grid.

The Ferrari driver was one of nine drivers to choose to run on the red-walled rubber for the 24-lap race, with that number including eventual race winner Valtteri Bottas.

Sainz and Bottas both moved ahead at the start from their second and fifth place grid spots – with the latter getting alongside Max Verstappen’s first-place-starting Red Bull and in front into Turn 1, with the former then demoting the championship leader to third with a move to the inside of Turn 4 as the grip benefit of the softs meant he got into a position to pass along Interlagos’ second straight.

Although Verstappen later repassed Sainz for second place, the Spaniard was able to defy Sergio Perez in the second Red Bull for the rest of the sprint race and finish third.

When asked how much of a gamble it had been to take the softs, with Ferrari letting Sainz and his team-mate Leclerc (who opted for mediums) make their own tyre choices, Sainz explained that spotting track temperatures falling by nearly a full degree from 36.6°C ahead of the start was key to his decision.

“It was very tough because in the end, the soft is maybe better for the first two laps, but then from lap three-four onwards, once the soft is nearly overheating, you want a medium tyre,” he said.

“That’s always the balance to find between start performance and a 24-lap stint or race.

“We want for the soft, but we were honestly 50-50. Like, the track dropping there at the end before the race start, kind of swung me towards the soft tyre – just because I thought it was going to be a bit easier to keep it alive.

“But I still think from lap five onwards, the medium was the better tyre. But, yeah, it was a tricky call, but I guess we did the right thing.” 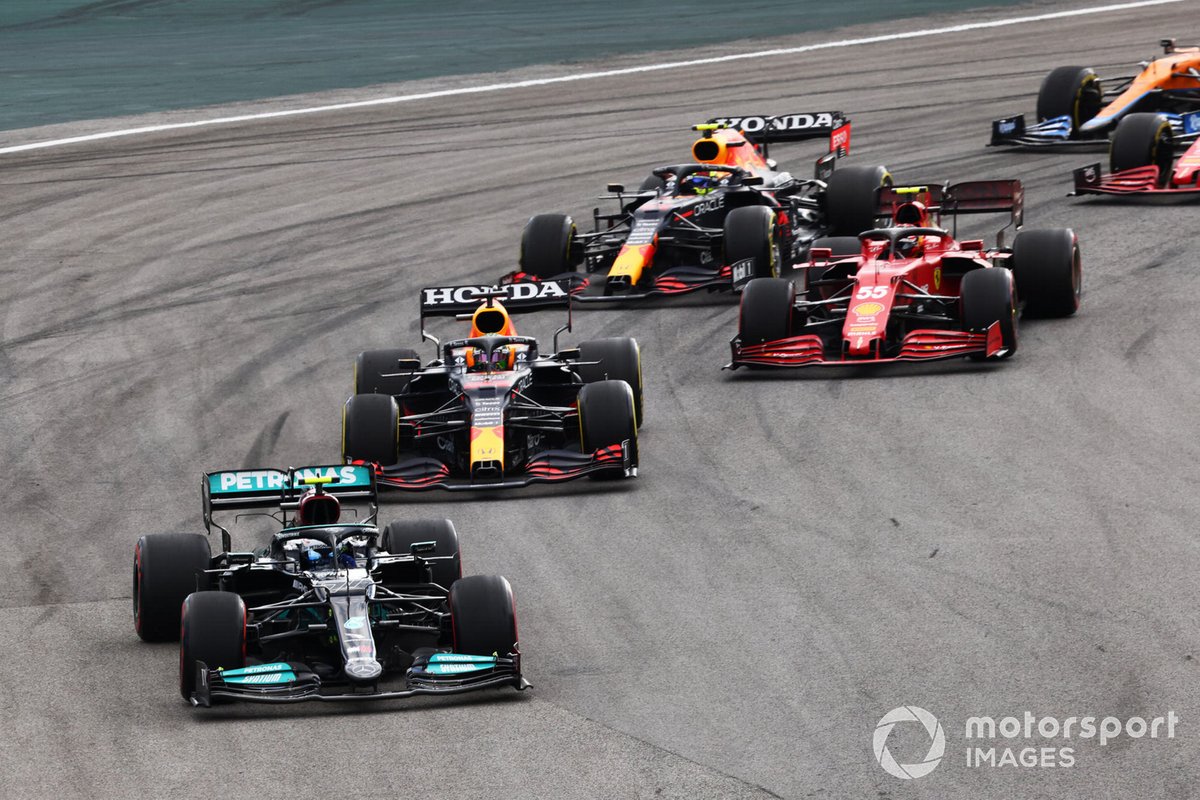 Sainz made a quick launch to take third into Turn 1, then claimed second from Verstappen into Turn 4

Sainz also explained how Perez “caught [up to run] very close pretty much half of the laps he was behind”.

He added: “I knew into the last corner whenever I had a seven-tenth gap, then I would have to defend into Turn 1.

“Whenever the gap was eight-tenths, then I would just make it into Turn 1 without having to defend. And nine-tenths would mean that maybe I didn’t even need to use my energy.

“So, it was exactly the same every lap and I [was] just hearing the gap from my engineer – he did a good job telling me the gap exactly at the DRS zone.

“Then I could manage the battery to my liking and know whether I had to defend or not.

“I think [Perez’s] front wing was very close to my diffuser in a couple of brakings [into Turn 1]. But, just like always with Checo, good fun, good fight and good racing.”