The reigning world champion, who only managed 25 laps prior to an afternoon of running on the final day, ominously set his best time on the medium tyre, a compound that Mercedes favoured more than its rivals during the week.

But the test was potentially even less representative than usual this year, with three days affected by severe weather.

Teams had to battle with wet conditions at various times on three of the four days, and freezing temperatures rendered much of the dry-circuit running relatively meaningless.

The start of the third day was delayed for three hours due to heavy snow, but on the fourth day temperatures increased and teams got to work once the track dried out following overnight rain.

Ferrari ended the test as the nearest challenger to Mercedes, with Sebastian Vettel's day two-topping time on the soft tyre three tenths adrift of Hamilton's best, which was set in much warmer conditions.

Stoffel Vandoorne took an eye-catching third overall after ending the final day second-fastest, although his best times were all set using the new softest hypersoft tyre compound, which McLaren used considerably more than any other team.

That pace at least allowed McLaren to end the test on a positive note, after its post-Honda era began with Fernando Alonso losing a wheel on day one and Vandoorne being limited to 37 laps on day two when a "£2 problem" caused the MCL33's exhaust to come loose, leading to heat damage under the bodywork. 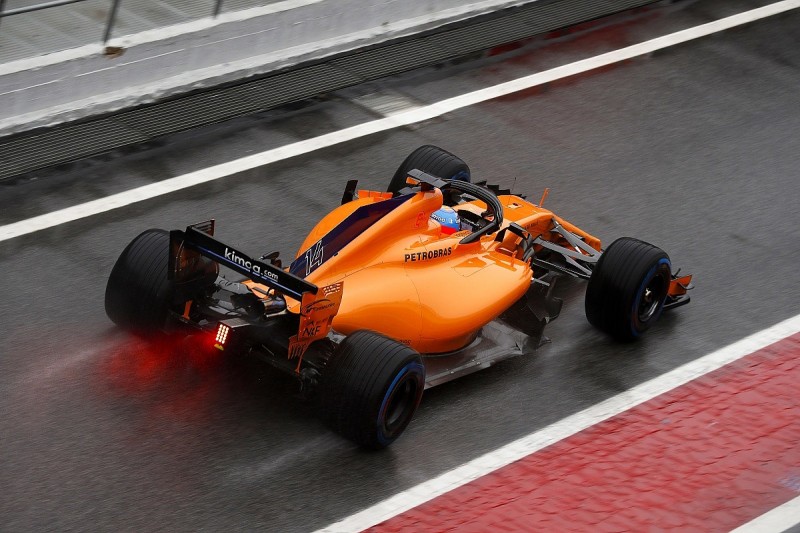 Alonso was the only driver to set a time on the snowed and washed-out third day, completing 11 laps as McLaren performed simple checks in a bid to make up for lost time. Despite its problems the team completed 52 more laps this week than it did during a disastrous opening test with Honda last year.

Honda had plenty to be positive about too as it began life after McLaren, with new partner Toro Rosso topping the lap count for the week.

That put it way ahead of Red Bull's senior team on mileage, as two fuel leaks for Max Verstappen and an off on the final day hindered the early running for the RB14.

Red Bull's pace was still reasonable, with Daniel Ricciardo topping the first day, and he and Verstappen ending the test fifth and seventh in the combined times despite not getting a chance to run when the track was at its warmest on the final afternoon.

The works Renault team's drivers - Nico Hulkenberg and Carlos Sainz Jr - sandwiched Alonso in the middle of the pack, followed by Lance Stroll, who was the fastest of the three Williams drivers in action as he shared duties with new team-mate Sergey Sirotkin and reserve driver Robert Kubica.

Force India - which is one of the teams planning a significant update package for the season-opening Australian Grand Prix - had a quiet first test, with limited mileage that left it bottom of the pile in terms of laps completed.

A sensor problem restricted development driver Nikita Mazepin to just 22 laps on the day the car launched, while reserve driver Nicolas Latifi was too ill to take up his scheduled time in the car on Thursday.

That day's running went to Sergio Perez, who did not get any seat time earlier in the week due to bad weather, and he managed the 17th fastest time overall, just behind team-mate Esteban Ocon.

Of the regular drivers, Sauber's Charles Leclerc and Marcus Ericsson - who both caused red flags during the week with spins into the gravel - brought up the rear of the field, only outpacing Mazepin's time from his limited running on Monday.

F1 testing: Was week one a waste of time? Fans' verdicts