Bitterly cold weather at Barcelona has reduced the amount of running F1 teams would have hoped to have achieved by the halfway point of the test.

Mercedes had opted to split each day of the first test between its two drivers with a changeover around lunchtime.

But lunch was cancelled on day two with the track remaining open to allow teams to make the best of reasonable conditions before predicted bad weather later in the day.

Hamilton and Bottas are down to do half a day each every day this week, with Bottas the first in the car on Tuesday.

"With the weather conditions being up and down and the loss of track time we had yesterday, it made sense to keep Valtteri in the car this afternoon," said Hamilton.

"Having run in the morning, he was comfortable in the car already and we would have lost about an hour of running time with the driver switch.

"With no real understanding of whether good weather was coming or not, I took the decision to sacrifice that time in order for the team to gain better understanding of the car by going through the run plan." 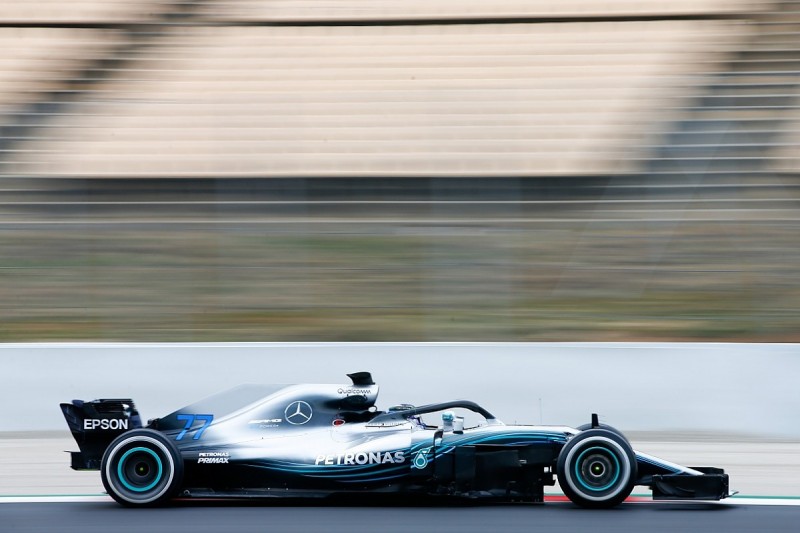 Bottas ended the day second quickest, 0.303 seconds behind Ferrari's Sebastian Vettel, with a final tally of 94 laps, and said the team did the best it could in frustrating conditions.

"It was very cold on track today; I don't think I've ever driven in such cold conditions before in Formula 1," said Bottas.

"Testing is always difficult in these temperatures, the tyres are just not made for these conditions. But we made the most out of the day.

"In the morning, we focused on aero work with different aero rakes on the car, running various tests. In the afternoon, I was doing long runs and we also worked on the set-up.

"It was quite tricky in these temperatures, but we managed to get some work done and found some answers to our testing items.

"The weather is obviously unfortunate, but there's nothing we can do about it and it's the same conditions for everyone.

"In these conditions, I would say today was a good day."