The three-time world champion led the way for much of the morning running with a 1m21.766s - 0.001 seconds slower than the time that left him fastest overall on Monday - but he then dipped under the 1m21s mark for the first time with a super-soft run 20 minutes before lunch.

While his 1m20.9s represented an improvement of 0.8s, his final sector was 0.3s down on the best time he managed on the soft tyre, so a much bigger improvement was possible.

That left Hamilton 1.8s clear of Ferrari, which stuck to its plan of running the medium-compound as Kimi Raikkonen took over from Sebastian Vettel for day two despite the Finn being unwell with a type of flu.

After a late start Force India made up for lost time with some soft-tyre runs for Esteban Ocon, leaving the Frenchman third in the order.

However, the team then caused the second red flag of the day just before the lunchbreak, with Ocon coming to a stop at the end of backstraight, past Turn 10.

The other stoppage was very brief, when Williams rookie Lance Stroll spun at Turn 9. As the Canadian had the circuit to himself and was able to rejoin after bouncing through the gravel at high-speed, the track was quickly declared clear again.

However, Stroll's high-speed off appeared to damage the FW40, and after completing 12 laps early in the day he did not return to the track before lunch. 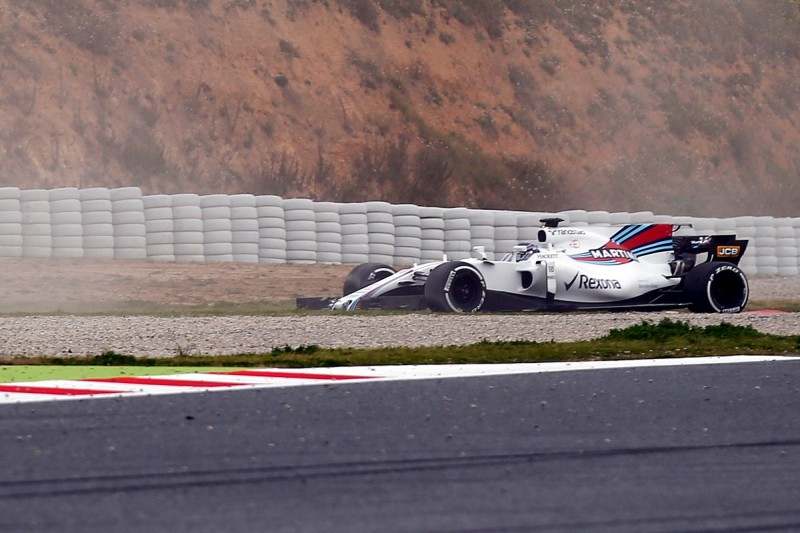 Also in trouble were McLaren, Sauber and Renault.

After a problematic first day, McLaren's Tuesday kicked off with Stoffel Vandoorne stopping the MCL32 in the pit entrance at the end of his second lap.

Following a short spell in the garage after mechanics pushed the car back, Vandoorne was able to log 29 laps.

Then more bad news followed later in the morning, when Honda confirmed it was carrying out its second engine change of the week after losing power - with the cause of the problem unknown.

Both Sauber and Renault failed to set a representative time.

Sauber said its delay was engine-related after stand-in Antonio Giovinazzi completed two installation laps early on, while Renault claimed it was continuing overnight work fitting new parts that had arrived for the RS17.

Renault's plan to get out before the lunchbreak appeared to be scuppered by the Ocon stoppage, but with the session being extended beyond 1pm to allow for an extra five minutes of running, Jolyon Palmer headed out when the track reopened.

He was joined by Giovinazzi, who stayed out to post his first time of the day, 12.7s down on Hamilton's best.

Mercedes used the extra time to send Hamilton out on the ultra-soft tyre, but he returned to the pits before setting a time.

One man who did improve in the additional five minutes was Kevin Magnussen, who thrust Haas up to fourth ahead of Max Verstappen's Red Bull - both teams using soft for their best laps.

Red Bull, which also had reliability dramas on day one, completed the same number of laps as McLaren with 29.